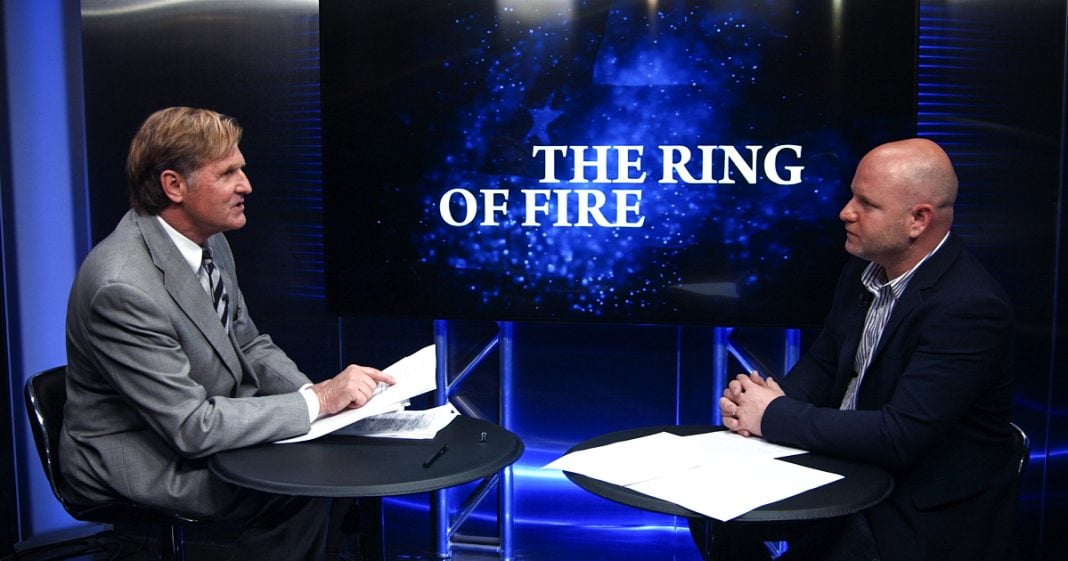 Big Pharma’s price gouging is finally on the radar for our elected officials, but will new legislation be able to overcome the massive money that drug companies give both Democrats and Republicans? Ring of Fire’s Mike Papantonio and Farron Cousins discuss this.

Mike Papantonio: Big Pharma’s price gouging is finally on the radar for our elected officials, but will new legislation be able to overcome the massive money that drug companies give both to Democrats and Republicans? They don’t favor either one. That’s what’s so interesting about his story. Okay, so Jeff Merkley, who I really love this guy.

Mike Papantonio: You know, he’s from Oregon. I actually, for some reason I got on his email list. Do you get his emails?

Farron Cousins: No I don’t.

Mike Papantonio: Yeah, he emails me and he will be, you know, where the campaign sends out information, this guy is brilliant. He’s one of the few people that backed Bernie. Remember that?

Mike Papantonio: One of the few Democrats that said, you know what, I don’t think Hillary can win. I got to see, I see a lot of problems with Hillary. She got too much baggage. And so he said, you know, I’m more like Bernie Sanders. Pick it up.

Farron Cousins: We’ll Merkley right now, and Bernie Sanders is also doing it as well, but he’s got this new legislation that not just targets pharmaceutical price gouging, but he does it in such an intelligent and clever way. And here’s what this legislation from Merkley says, it says, if you’re charging the United States more for a pill than what you’re charging other countries, you know, if we’re paying more than Spain, anywhere.

Farron Cousins: Right. Then you are no longer, that drug is no longer eligible for Medicaid dollars, Medicare dollars, VA dollars, not a dime.

Mike Papantonio: Which is about a third of their income.

Mike Papantonio: Now, I want you to remember something. Okay, this, we’re getting ready for a presidential election, right? Springsteen comes out and says exactly what I’m saying. I don’t see anybody that’s going to be Trump. There’s none of these hold over, you know, Hillary Democrats that are going to do.

I don’t see it. Springsteen said the same thing because he’s trying to be honest. He says we got to get busy. If the Democrats want to do anything, they’d better get busy. Okay. So, Cory Booker. Cory Booker is one of those name. Now, Cory Booker, the last time that this had a chance of passing when the pharmaceutical industry was on the ropes, man. I’m talking about like just a few votes away from having to say we are now; we got to play by rules.

We can’t just charge whatever you want to charge. You did a story one time, and by the way, Cory Booker is the one that made it go away for the drug industry. He came to their rescue, for example, it was okay with Cory Booker that Celebrex, for example, it costs 60 cents to make and the price of 100 tablets is $130. That’s a 21,000 percent markup. Cory Booker was fine with the idea that Claritin, geez, these numbers are staggering.

Farron Cousins: Yeah, Claritin at about a 35,000 percent markup.

Mike Papantonio: Yeah, Lipitor 5,000 percent markup. Now Cory Booker had all of these, and that wasn’t just Cory Booker by the way. It was the Cory Booker…

Farron Cousins: I think McCaskill was in there too.

Farron Cousins: No, that isn’t 100 percent what happened.

Mike Papantonio: Okay, so now Merkley who I got to tell you, watch this guy, he could be a presidential candidate. Nobody knows, he doesn’t have name recognition, but when he gets out there and he talks about things like this, he’s also the guy that was going after Wall Street and saying, you know what, all these promises that Obama made to the American public about, you know, I’m going to put Eric Holder and he’s going to do something about throwing some of these Wall Street thugs in prison.

Merkley was outraged when nothing happened. Okay? So Merkley comes out and says, ah, you know what? We lied to the American public and I want to do something about it. So you got Merkley on this where he’s saying, you know, you’re not going to steal from the, drug companies, you’re not going to steal from mom and pop who have to sometimes cut a pill in half because they can’t afford to take the entire pill. That’s where we are. This is, this is a disaster.

Farron Cousins: But the rest of the world doesn’t pay these numbers. They pay anywhere between about 200 and sometimes on the extreme side, 2000 percent. Now 2000 is the highest number of any drug markup I’ve been able to find that I’ve, I’ve looked extensively at this.

Mike Papantonio: They negotiate it.

Farron Cousins: Right, they do.

Mike Papantonio: The other countries negotiate and they say to Pfizer, uh-uh, you’re not going to charge that kind of money. Pfizer, first of all, the big lie, the big lie was talked about by Merkley about a year ago. Mekley comes out and says, you know, the drug companies will tell us, oh God, we got to have all this market because of research and development. Nonsense, it is a lie, it’s an absolute lie. Most of the research comes from public taxpayer’s. Happens at universities and then the drug company comes in and buys that and they’re making a gazillion dollars the tax payer had to pay for.

It’s not research and development. Most of their money goes towards those ridiculous ads that you see every night on Msnbc or CNN. You know, you got, you got restless legs syndrome. It’s every, I mean it literally, it’s almost every ad is you’re dying, here’s a new disease you maybe didn’t know about and we have a new drug for you. That’s how bad this industry is. It’s just become a joke. Merkley’s a guy to watch Farron.

Farron Cousins: And you know what too though about that research and development, people have to understand this as well. These laboratories where Big Pharma works, there’s not just a basement filled with scientists down there with their test tubes and microscopes running clinical trials. That’s not what happens. Those big headquarters, those are offices. Those are, you know, board members. The research and development is taking place mostly at universities. They do all the trials.

They record the results, they put it in their medical journals, and then the drug companies who have been funding it partly, the government’s funding most of it, they then come in and say, thank you for your work. I’m taking my stuff and I’m taking this to the FDA.

Mike Papantonio: Let me tell you what they do in addition to that. The stop in between. Is if they don’t like the clinical data that comes out of research, they do their own and they phony it up.

Mike Papantonio: The last four pharmaceutical cases I’ve handled, I mean massive cases, every one of them, every single one of them did exactly that. They’d take research from the University or wherever it is. They then do their own clinicals. They’re very different for what research happened at the university. They phony up the clinicals, sell the product to the American public for years before anybody takes it off the market because so many people are dying.