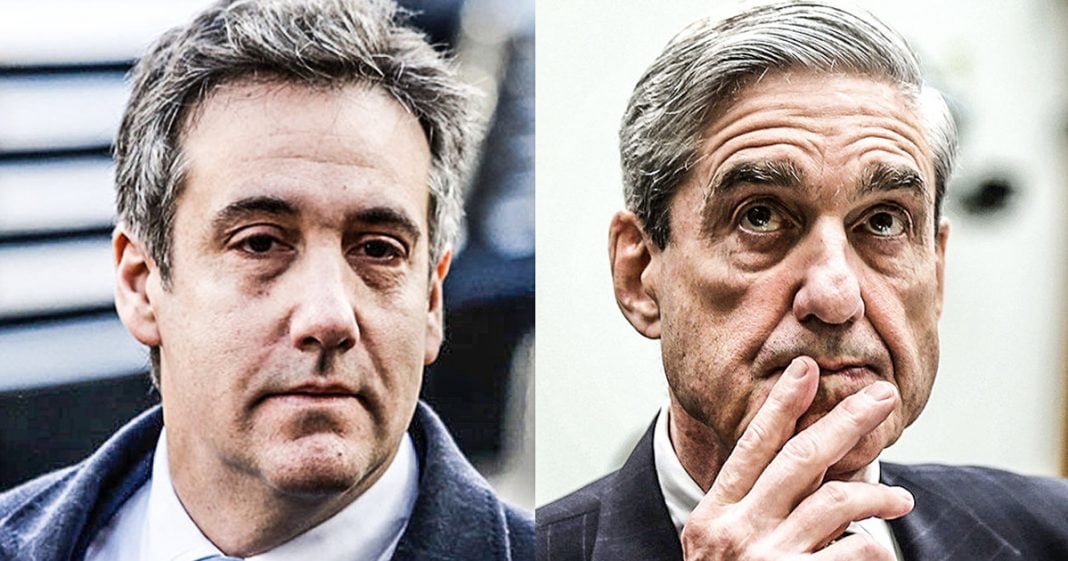 Speaking to Good Morning America, Donald Trump’s former lawyer Michael Cohen said that special prosecutor Robert Mueller has more than enough evidence to corroborate and verify Cohen’s claims that Donald Trump knew that the hush money payments were not only happening, but that they were illegal. If Cohen is to be believed, this is a major blow to Trump and could easily result in a subpoena or even an indictment for the President. Ring of Fire’s Farron Cousins discusses this.

One of the things that Donald Trump has been trying to argue on twitter recently is that Michael Cohen acted on his own. Trump didn’t know the illegal hush money payments. We’re going to happen. He wasn’t a part of it. Michael Cohen did this, and if it was illegal, Cohen should have known that, oh my God. Cohen’s just this horrible, horrible human being. Well, in an interview this week with Good Morning America, Michael Cohen blew a hole straight through Donald Trump’s talking points. Now, while it’s true that Cohen is about three years in jail for lying to Congress tax evasion, breaking campaign finance laws may not necessarily make for the most credible person on the planet, right. However, coincide something during that interview with George Stephanopoulos that we’ve been saying for awhile now, and that is that Robert Mueller, the special prosecutor, has enough evidence and enough testimony on hand to be able to corroborate and verify the claims that Michael Cohen has made, and according to this interview that he did with good morning America, some of the claims that he made were, yes, Donald Trump absolutely knew these payments were happening.

In fact, Donald Trump knows every single thing that has ever happened with Trump organization. Now that’s an important statement that we’ll get back to in just a moment, and he also said that Trump knew these payments were wrong, and that is another piece of the puzzle here because as Trump loves to say, this is a civil case, right? Well, that’s where the southern district of New York’s argument the other day saying, they don’t know if Trump knew it was illegal. That’s why they mentioned that, because if he didn’t know that it was illegal, this might just be a civil case. If he knew he was breaking the law, ordering somebody to break the law, it’s 100 percent criminal, nothing he can do about it, and that’s why Cohen’s admission there, that Trump knew these payments wrong is devastating to Donald Trump, but what’s even more devastating is the comment I mentioned before that that there is nothing that goes on within the Trump organization that Donald himself doesn’t know about.

What does that mean for that Trump tower meeting likely means that Donald Trump knew it was taking place. He knew what it was about and he knew what they stood to gain from it, as well as every other meeting carried out by any member of this administration who was talking to people that they should not have been talking to. This is bad. This is bad for Donald Trump, and what’s even worse is the fact that if Michael Cohen is to be believed, which the special prosecutor has said he should be, than Robert Mueller is sitting on a hell of a lot of information that can back up every damning claim that Michael Cohen is made against. The president.