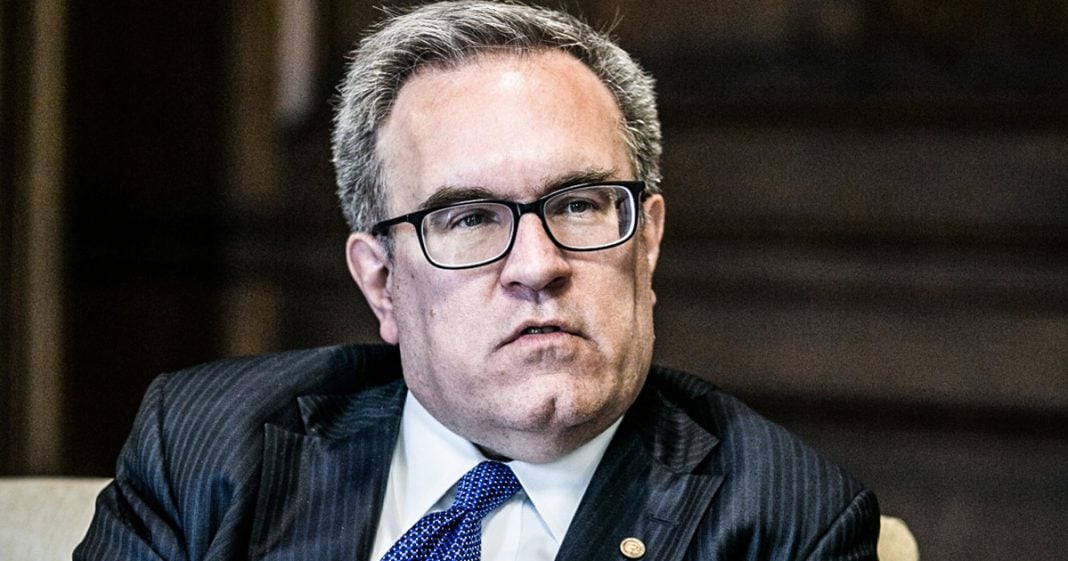 The EPA is squarely in the pockets of GOP donors and industry elites, and their actions this week prove it. The EPA promoted an article this week from a right-leaning newspaper owned by casino billionaire Sheldon Adelson, where the paper was bragging about yet another regulation being destroyed by the Republican Party. These regulations save lives and boost the economy, and Republicans cheer when they are repealed. Ring of Fire’s Farron Cousins discusses this.

The EPA under the leadership of Andrew Wheeler, the former coal lobbyists, is out there right now actually bragging about the fact that they’ve got right wing mega donors boasting about the repeal of regulations from within the EPA. Here’s what’s happened over the last few days, we all know the EPA has rolled back and actually changed the definition of the phrase waters of the United States so that smaller bodies of water can be heavily polluted and the EPA doesn’t have to regulate those. Those are basically corporate toxin dumping ground, so right now, so the Las Vegas Review Journal on their editorial page, their editorial board wrote an op-ed saying there goes another one. That was the headline. There goes another one and they talked about how awesome it is that we are repealing regulations left and right and just letting corporations do whatever the hell they want to hear in the United States. Now, in case you didn’t know this, the Las Vegas Review Journal is also owned by Republican mega donor, billionaire Sheldon Adelson, who together with his wife according to ThinkProgress, donated $55 million dollars to Republican causes and candidates this past year trying to hang onto the house and Senate Adelson’s wife has also recently awarded the Presidential Medal of freedom by Donald Trump himself.

Here’s the bigger picture though. The EPA is sharing this article from the Las Vegas Review Journal with other journalists with the press here in the United States. They’re sharing it saying, look how good we are. Look what this paper wrote. You should write something like this as well. They’re bragging because a billionaire owning a newspaper wrote something good about them, which he would have done regardless because he’s a hardcore Republican and he has a financial stake in you, but to brag about the fact that you’re going to poison more American citizens, because let’s call it what it is, and this is the poisoning of America. That is what you are doing. Every time you repeal these regulations. Some of them may not have even gone into effect yet, but you’re not even going to give him a chance because you hate Obama so much and apparently you hate the American public so much because those are the people who are going to suffer.

Obama’s going to be fine. You’re not trashing his legacy. People see you for what you are, but we’re also going to be the ones who suffer because those smaller waters that you’re deregulating allowing corporations to dump whatever they want to win there. Those are the same waters that feed our aquifers. Those are the same waters that feed our water tables that we use to water our lawns that our kids go outside and play in. We use them to fill up swimming pools across the country. That’s what you’re poisoning. We are the ones who are being poisoned and if a billionaire like Sheldon Adelson needs to take out a whole page in his paper to brag about that fact, then you know you’ve done something wrong. But right now we have a federal government that only works for millionaires and billionaires. If you do not fall into one of those categories, they do not give a damn about you and they are perfectly fine with you living your entire life surrounded by corporate toxic waste because that is exactly what they are trying to make happen right now.