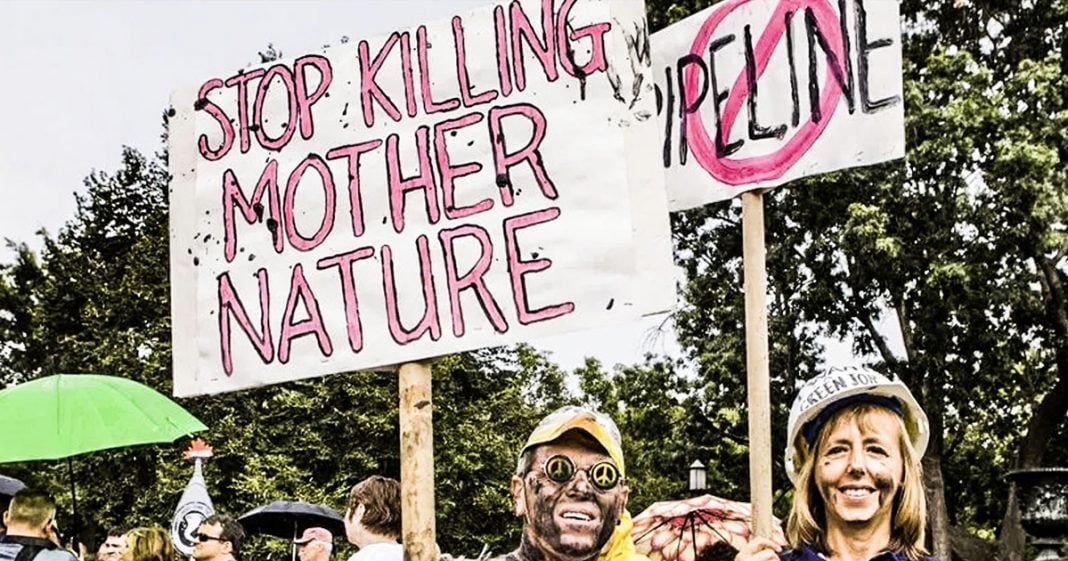 The Guardian has obtained documents from the FBI that show that the agency was actively spying on and tracking environmental activists, specifically those involved with the group 350.org. These activists were nonviolent and had only been arrested during protests, but the FBI still considered them a big enough threat to the status quo to warrant tracking them. Ring of Fire’s Farron Cousins discusses this.

According to recently released documents by The Guardian documents that they obtained via Freedom of Information Act from the FBI itself. The FBI had been surveilling tracking and monitoring environmental groups here in the United States. Specifically, they were going after protesters who were part of the May 2016 break free from fossil fuels, a protest that were put on by three fifty.org. Some of those protesters had been arrested at that event. Some had been arrested in the past, but all of these were kind of arrests just for protests, you know, civil disobedience. Nobody had any violent criminal history. None of that took place. There was no vandalism. They were just people exercising their first amendment rights. That’s why a lot of these never resulted in actual criminal charges. But nonetheless, the FBI decided to start monitoring these people and tracking these organizations, following them around, getting whatever kind of information they could on them spying on them.

Because as the documents say, uh, this was part of a related domestic terrorism case. Now, as far as we can tell from any of these documents, there was actually no terrorism case related to any of these people. What they were doing was trying to get the United States to break our fossil fuel addiction so that God forbid we may have a better habitable planet in years to come, but the FBI treated these people like they were absolute criminals, like they were the mafia somehow like they were terrorists. I mean, that’s the word that was used by the FBI, terrorism when in reality these were private citizens who had their rights abused by the FBI. See, here’s the thing. A lot of people I guess don’t understand this. The FBI is actually forbidden from surveilling, investigating, tracking, or tailing any organization or person based on political beliefs. It’s illegal.

They can’t do it, but according to these documents, they did it. So that’s why they come up with the flimsy excuse saying, oh, no, no, no. There was probably some terrorism happening, so that’s why we were doing that because as we all know, you throw that word in there and because of all the laws passed during the Bush administration, the FBI, the CIA, whoever it is, they can get away with anything at all. Now, I’m not the kind of person that thinks, oh, the deep state’s out to get us. I don’t even like hearing people say the phrase deep state makes them sound like a crazy conspiracy theorist. I do not believe there is a deep state behind the scenes pulling the strings of anything in the United States, but what I do believe is that we have massive human rights abuses taking place nearly everyday from our intelligence communities.

Now, does that mean they always do horrible work? Absolutely not. The FBI is vital. The CIA, believe it or not, is still vital. They do some awful things and they should be held accountable and they should have to answer for those things. And this surveillance of environmental activists is one of those things because the only group that these protesters posed a threat to were fossil fuel ceos who refuse to give up their massive profits to make this planet a better place because they are solely motivated by greed. If you asked me, those are the people that need to be investigated by the FBI. Those are the documents that the FBI needs to be looking at. Instead of trying to look@groupslikethreefifty.org or any of the activists who go out there and do a civil disobedience act and ended up getting arrested for it and then surveilled by our intelligence community for years to come.