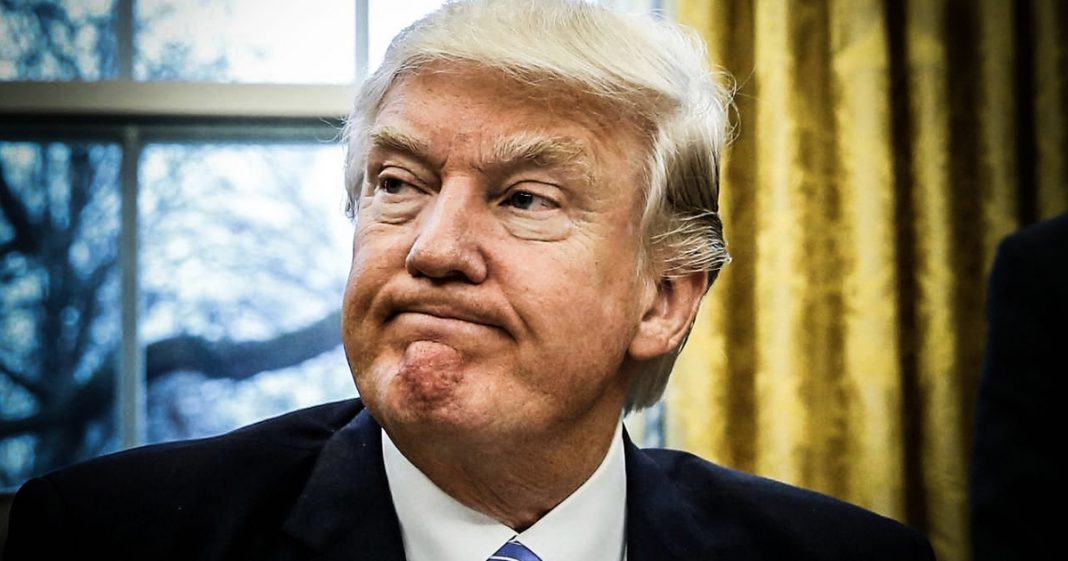 The President of the United States has been implicated in yet another felony relating to hush money payments to women that he has had affairs with. This time it was the payment to former Playboy Playmate Karen McDougal by American Media, Inc., the parent company of The National Enquirer. In court filings, American Media admitted that they made the hush money payment to McDougal in coordination with the Trump campaign, and that the payment was meant to help the campaign. Ring of Fire’s Farron Cousins explains what this means.

Last friday, Donald Trump was directly implicated in felony activity when Michael Cohen alleged that he made the hush money payment to stormy daniels on behalf of Donald Trump to aid the Donald Trump campaign on Wednesday of this week, the president was implicated in yet another felony. That felony happens to be the hush money payment to playboy playmate Karen McDougall, which was also made before the 2016 election in an attempt to not let that story leak out and affect the campaign of Donald Trump. And we know that because of court filings that took place on Wednesday in the southern district of New York. Here’s the story, uh, American media incorporated, which is the parent company of National Enquirer run by David Pecker, a good friend of Donald Trump. They admitted in those filings that they paid Karen McDougall, the hush money payment, 150,000, um, to keep her quiet so that she didn’t come forward with her story and derailed Donald Trump’s campaign for president.

They admitted that the payment was directly made so that it would influence the 2016 election by not having this story released. That is without question, by definition and in kind campaign contribution, so that looks bad for the American media, a company, right? Well actually it doesn’t because see, they’ve been given immunity because of their cooperation with the southern district of New York because they’re giving a lot of valuable information including information about this payment, which they also say, and this is the part that’s bad for Trump, they made in coordination with the Trump campaign that directly ties in Donald Trump. Here’s why. As I mentioned, David Packer, the guy that runs this company is a good personal friend of Donald Trump. He knows Donald Trump personally. There is no way that these two men did not discuss this before it took place, and now we have the president directly implicated in his second felony that occurred before the election, but that’s the second one in seven days, and let’s keep in mind something a lot more important here.

This has nothing to do with anything that Miller’s investigating. That’s what’s so awesome about this. These two violations here, these campaign finance violation, felonies by the president, would ordinarily be enough to derail somebody’s presidential campaign and get impeached. Unfortunately, we have too many Republicans right now in the Senate who keep telling us that. I don’t care if the president broke the law. I, it’s literally what Orrin Hatch said a few days ago. I don’t care. I don’t care. He’s good for Republican policies. Ran. Paul tried to make excuses for it. Uh, Kevin Mccarthy and the House of Representatives made excuses for it. He said, Oh, if campaign finance violations are against the law, than half of my caucus would be gone. Good. If people are breaking the law, they should face the consequences, right? I mean, aren’t you the party of law and order, aren’t you? The guys who say were Super Patriots and we love this country and part of loving the country is respecting the laws.

And yet here you are dismissing a president who in the past week has now been implicated in two different felonies for doing the same thing, but two different women. I mean, what more is it going to take at this point, any normal Congress and Senate would have impeached this guy on Monday. I really, that’s what would have happened if we would have had a normal congress and Senate. Instead, we’re just going to let the felonies a pile up. He’s got that emoluments clause lawsuit where they’ve already subpoenaed documents from the Trump organization getting their financial info. That I’m sure is going to uncover some things that Trump doesn’t want us to know about. We have all of the, uh, women accusing him of improper sexual activity. That is still ongoing. I mean the Summer Zervos case. That is also a big one that could reveal a lot of unpleasant and potentially illegal things about the president.

And then let’s certainly not forget about Robert Mueller himself. There are multiple different things right at this second that could take down the presidency of Donald Trump. And the worst part is that according to all the information we already have available, the evidence we have available, this guy could have already been impeached, but again, we have Republicans telling us that they’re completely okay with the president breaking the law as long as he keeps supporting the policies. They want him to support so much for being the party of law and order right? Republicans, because you are your guy, the guy representing your party is breaking the law on a near constant basis. And every few days at this point, the American public is getting a clearer picture of just what a horrendous criminal this man truly is. That’s going to be hung around your neck for years to come. And I hope that you’re prepared to deal with the consequences.