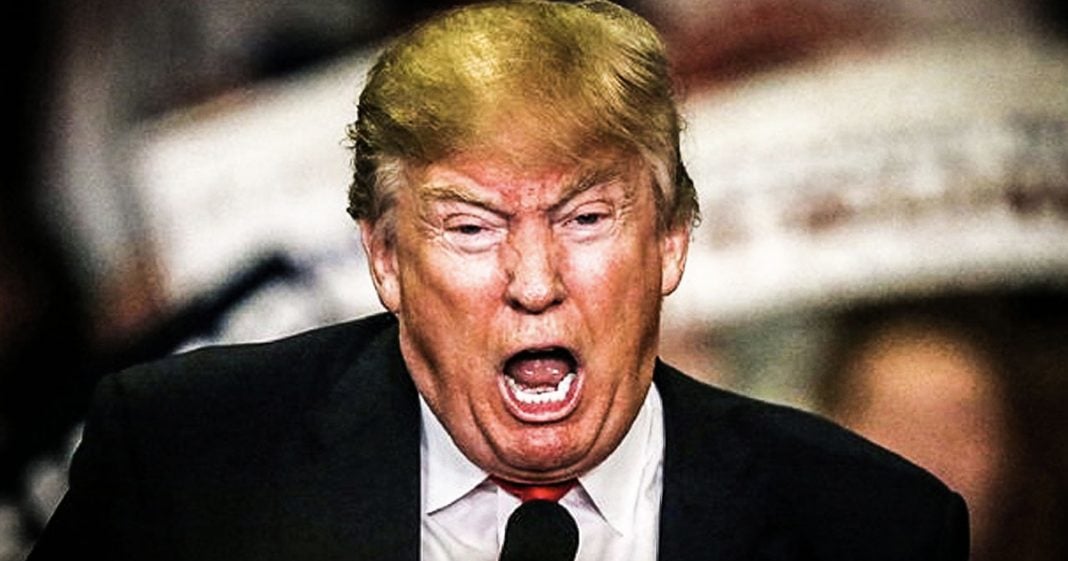 Michael Cohen was sentenced to 3 years in prison this week after cooperating with investigators and pleading guilty to multiple criminal acts. Donald Trump, as expected, is trying to distance himself from his attorney/fixer, saying that he never told him to break the law and that he’s totally innocent (and that Michael Cohen sucks.) Ring of Fire’s Farron Cousins explains why Trump’s defenses reek of desperation.

So yesterday, Michael Cohen, Donald Trump’s former lawyer slash fixer, was sentenced to three years in prison for crimes that he committed some of those were crimes that he claims he committed at the behest of the president of the United States, Donald J. Trump. So Trump obviously little nervous right now, kind of freaking out, and that freakout was on full display because as usual he put it right there on Twitter for all of us to see. Here are some excerpts from Donald Trump’s Twitter tirade Thursday morning, the day after Cohen was sentenced. I never directed Michael Cohen to break the law. He was a lawyer and he is supposed to know the law. It is called advice of counsel. And a lawyer has great liability. If a mistake is made, that is why they get paid going was guilty on many charges unrelated to me, but he plead to, to campaign charges which were not criminal and of which he probably was not guilty even on a civil basis.

Those charges were just agreed to buy him in order to embarrass the president and get a much reduced prison sentence, which he did, including the fact that his family was temporarily let off the hook. As a lawyer, Michael has a great liability to me. Donald Trump says exclamation point after the me there. All right, so lots of things to unpack obviously from this series of Asinine tweets. First and foremost, a know what Cohen did was 100 percent illegal, even the ones that pertain to you, Donald, and you keep arguing this is a civil case. It’s a civil case. It’s really not. It’s really not. I don’t know why you keep trying to convince people that it is, but it is 100 percent. Not this at this point is a criminal case because you directed an illegal hush money payment and as you say, the, uh, your lawyer should know the law and if he knew that that was against the law, then yeah, this is not a civil case what so ever you directed that.

We know that you can’t deny that it never happened because we’ve actually heard the audio tapes of you and Cohen on the phone talking about it. I remember the one where you yelled at somebody to go get you a coke. Yeah, that tape where if you were talking about the illegal hush money payment so you can whine and cry and be freaked out all you want. That doesn’t change the facts of this case. Not to mention the fact that the southern district of New York, the US attorney there, or the state attorney along with Robert Mueller, they have been able to corroborate and verify the things that Michael Cohen told them and as such, they know that he is telling the truth. So you cannot come out and claim that Cohen. Oh, just pleaded guilty to things he wasn’t guilty to know. They know, they knew. They have the evidence.

They’re Cohen knows what they have and he knows what he gave them and because it was such value, he did not receive that substantial prison sentence that New York wanted to impose on him and instead he only got three years colon according to prosecutors in New York, much like yourself, Mr. Trump was motivated by greed. He wanted more money, he wanted a more lavish lifestyle. He wanted people to look upon him and be jealous of the way he was living and that’s basically what was spelled out in those court documents that were filed last week. Sounds a lot like yourself, doesn’t it, Mr Trump, and where do you think Cohen learned it? Where do you think colon learned all that? Greed. Where do you think Cohen learn to bend the law. That all came from you and the more court documents that get filed, the more people that start flipping on you, the more we’re going to find out that you’re a little panicked. Excuses you’re giving on Twitter are completely false and it’s just your desperate attempt to keep yourself out of prison.