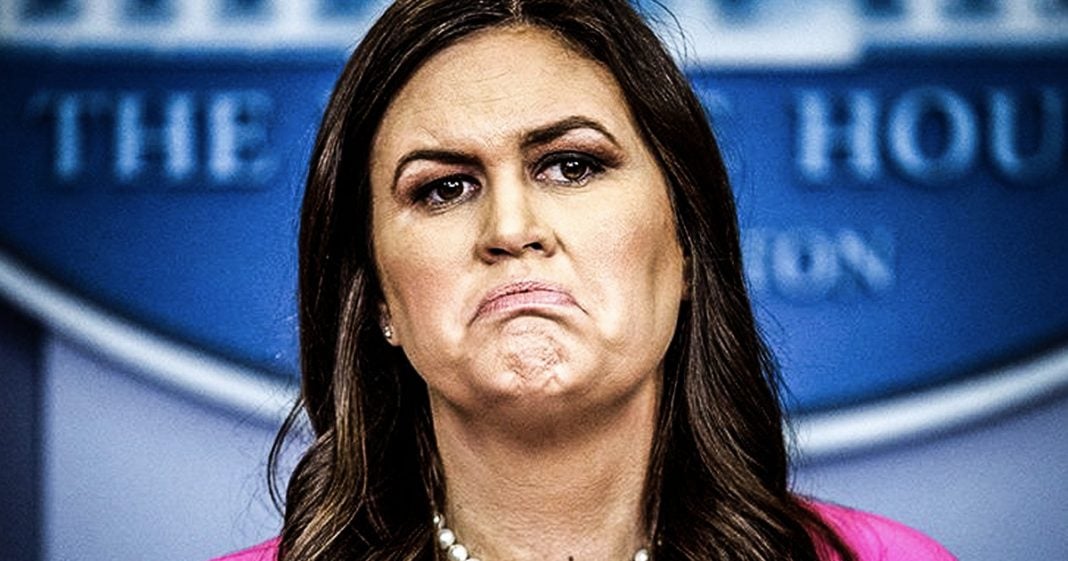 During a recent interview, White House press secretary Sarah Huckabee Sanders said that she hopes her legacy shows that she was transparent and honest with the American public. Anyone who has ever sat through or even just watched one of her press briefings knows that this will never happen. Sarah has been openly hostile towards the press and lies about everything she possibly can, and that, as Ring of Fire’s Farron Cousins explains, will be her legacy.

Recently at the 2018 women rule summit, Sarah Huckabee Sanders actually sat down with reporters to talk about her job and more importantly, what she believes her legacy could be upon departure from the White House. Here are Sarah Huckabee Sanders, words about what she hopes her legacy will be once her time with Donald trump comes to an end. Here it is. I hope that it will be that I showed up every day and I did the very best job that I could to put forward the president’s message, to do the best job that I could, to answer questions, to be transparent and honest throughout that process, and do everything I could to make America a little better that day than it was the day before. And that’s a really uplifting message, right? That’s what everybody wants to do in life. Just make today better than the day before it. Make a better future for everyone in this country, sunshine and rainbows and puppy dogs and butterflies everywhere.

Unfortunately, here in the real world, we understand that Sarah Huckabee Sanders has not done any of that, nor will she ever. That’s just who she is as a person and it’s likely because her father is an absolute piece of crap and raised a horrible family. Now you can object to that if you want, but you go back and you look at the history of both Mike Huckabee and all of his children, and you’re going to see that none of them turned out to be decent human beings, and Sarah’s no exception to that. Sarah Huckabee Sanders goes out there anytime she gets on that podium, which at this point is about once a month now because she can’t stand talking to the press. Ironically, that’s actually her job to do it, but she hates it. She lies. She attacks the members of the press. She refuses to answer questions. She dodges around the issue, dances around it.

She insults them, and yet she thinks that people are gonna. Say, Oh, well, she made the day better than it was the day before. She has created such a bright future for all of us here in the United States. God bless Sarah Huckabee Sanders. Yeah, not gonna Happen. You’re a horrible, vile human being and you’ve been given. Here’s the funny part, you’ve been given so many opportunities to redeem yourself, to denounce this administration, to simply walk away and every time, every time you have been given the opportunity to do the right thing, to say the right thing, to treat other people with the basic humanity that they deserve. You failed. You failed every time. You have never done what you should have done, what you were supposed to do, or what anybody with a moral compass would have done. So you can imagine that your legacy is going to be something great that we’re going to read about in history books about the great coming of Sarah Huckabee Sanders. But in reality, you’re going to be a footnote to one of the worst administrations in the history of the United States and nobody is going to look back at you and say, Oh, I wish Sarah Huckabee Sanders was still there.