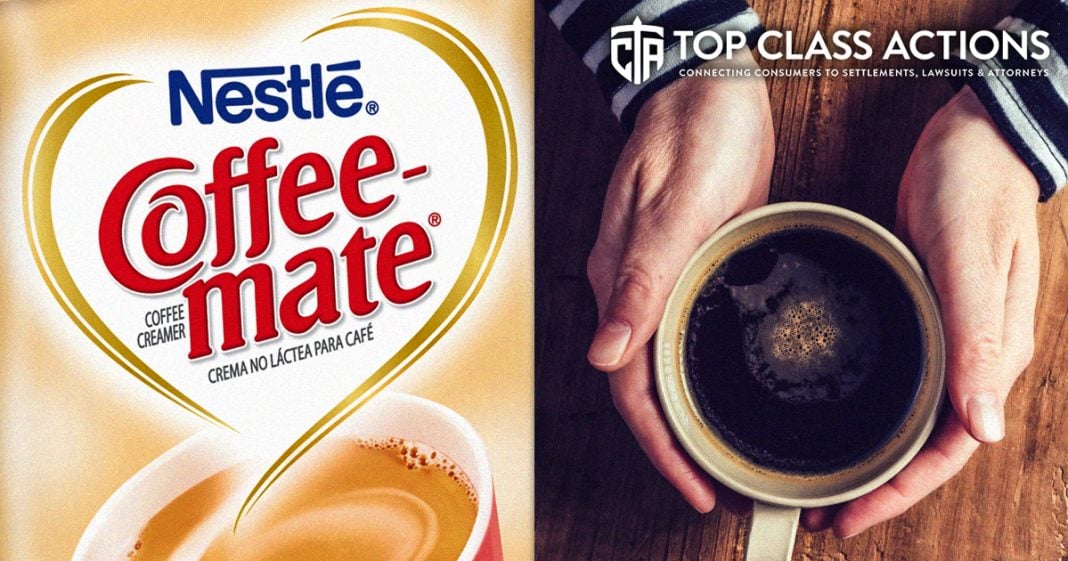 Another company is facing a class action lawsuit for not being honest about what their food products contain. This time, the makers of Coffee-Mate coffee creamer are accused of misleading the public and regulators about the trans fat that their product contains. Ring of Fire’s Farron Cousins discusses this with Scott Hardy from Top Class Actions.

Farron Cousins: One thing we’ve been noticing over the last few months and really over the last few years is that food manufacturers here in the United States are rarely honest about what is actually in their products. Recently we’ve been talking a lot with Scott hardy from Top Class Actions. He’s with me right now and we’ve talked a lot about food products that contain one thing, but say they contain another. Some food products that actually contain wood pulp and now once again yet another food product.

This shouldn’t be a big deal. It’s not actually dangerous, even though it’s been found to be dangerous. I think that Coffee-Mate should go ahead and declare it, should pull it out of their actual product. And if you’re the number one, if you’re the number one coffee creamer in the country, then you should absolutely be the leader in keeping your customers and your consumers healthy and not putting things like partially hydrogenated oil within the creamer itself.

Farron Cousins: You know, and I think that’s something that people need to understand. It’s not just, oh well they said no trans fats, but there is trans fats. It is so much more than that. First and foremost, it is, as you mentioned, the fact that trans fats, high consumption of those is linked to all sorts of diseases and illnesses, many of which do not have cures. So if you’re somebody who gets a lot of trans fats in other ways and you love to pour this stuff into your coffee, you know, you could be getting twice the amount of trans fats that you thought you were getting.

If you already have health problems, this could be making it worse. This is a very serious health issue for consumers. The second part, they’re taking away your right to make an informed choice. You know, as you pointed out again, with the International Delight’s coffee creamers, they don’t use trans fats. And so in order to compete with that, Nestle labels Coffee-Mates as, oh, we don’t either, but we actually do. So you’re thinking you’re choosing between two products that are essentially similar when in reality one of them contains something that can cause irreversible diseases and the other does not. To me, that sounds like a pretty easy choice to make.

Scott Hardy: Yes, absolutely. I mean if people are using this product and they’re saying it’s got no trans fat, I’m just going to go ahead and pour it in my coffee, I’m not going to worry about it. When not only does it have trans fat in it, but it’s partially hydrogenated oil, then that’s a big problem. It needs to be declared and people need to know what they’re putting into their bodies. That’s only fair and that’s what this class action is trying to go ahead and make sure that Coffee-Mate has to declare these things, has to make people aware of what they’re putting in their bodies and has to make some changes to keep people healthier. If you’re putting stuff in your products that could harm people, you’re going to lose customers. You’re going to lose trust in the consumer and no amount of profit is going to make up for that.

Farron Cousins: Exactly. And people, that’s the most important thing is people need to know what is going into their bodies and if corporations are not going to be honest about what’s actually in their products than we as consumers have no real way of knowing what it is we’re putting into our bodies. And when we develop these diseases, you know, 10 years down the road, 5 years down the road, whatever it is, we don’t even stop to think maybe I was getting some bad stuff from food product x or y, when in reality that is 100 percent what could have caused it. We can’t link that together.

So it’s best that companies come clean now and the only way we’re able to do that is with these class actions. You know, we’ve seen that these companies, when left to their own devices, they’re never going to act in our own best interest. They’re only going to act in a way that’s going to benefit them. That’s going to increase their bottom line and that’s going to enrich their shareholders because that’s what this entire advertising thing was about. Advertising it as zero grams of trans fat is an attempt to get people to buy your product because they believe that it’s safer than the one on the shelf next to it.

Scott Hardy: Yes, absolutely. People are buying it. They’re saying, I don’t want trans fats in my body, and you’ve got Coffee-Mate that’s saying, hey, buy our product, we’re safe. You can go ahead and put it in your coffee. You’re not going to have that problem. When in fact not only are putting in trans fats in your body, but you’re putting in something that could cause Alzheimer, dementia or other problems according to this class action and that’s just scary.

Farron Cousins: Absolutely. If anybody needs any more information on this, you can follow the link in the description to this video. It will take you to Top Class Actions where you can find out all about this story and more and while you’re there, subscribe to their newsletter. As I always say, I mean, this is something that contains information that is vital for American consumers to stay informed about what is happening in the world around them. What’s happening with the products they use everyday. The vehicles they drive. Top Class Actions is the best place to get that information. So Scott Hardy, thank you for all that you do and thank you for talking with us today.