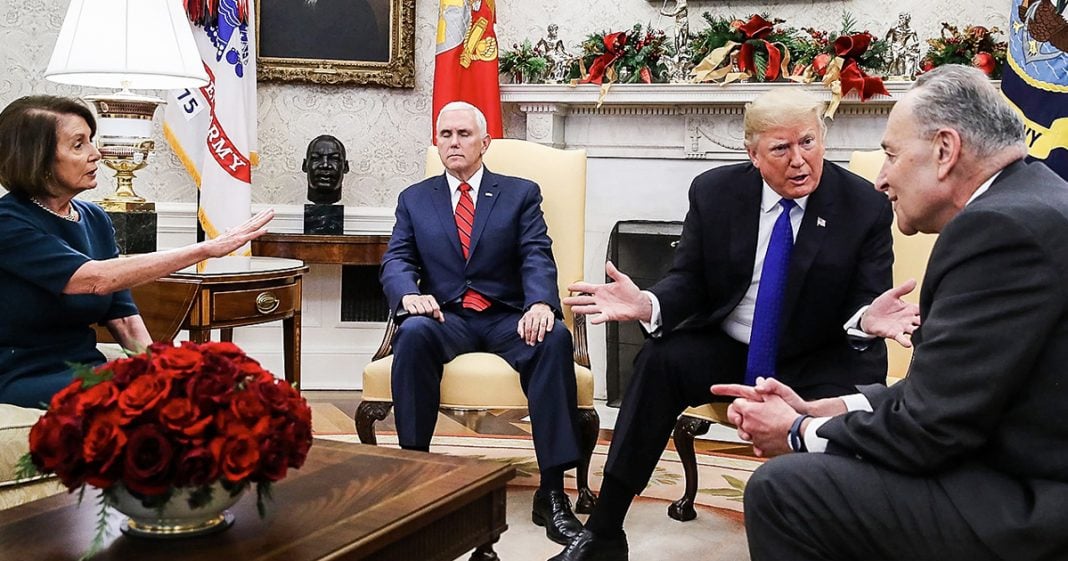 According to a White House reporter, Donald Trump threw a major temper tantrum right after Nancy Pelosi and Chuck Schumer left his office on Tuesday. The two Democratic Leaders embarrassed Trump in every way possible, with Pelosi doing most of the damage. Trump is furious about his concessions in that meeting, and the fact that the Democrats look like superstars right now. Ring of Fire’s Farron Cousins discusses this.

Well, I’m sure by now everybody’s probably seen some clips of what took place at the White House yesterday between Donald Trump, mike pence, who may or may not have been sleeping through the meeting, uh, and Democratic House leader, Nancy Pelosi, democratic Senate leader, Chuck Schumer. Um, here’s what’s fun about the whole thing before we even get into the real issue here is that Nancy Pelosi and a hell of a lot more than Chuck Schumer, Schumer gets, you know, one percent of the credit for what happened yesterday. Pelosi’s get a 99 percent of it, at least she did as Jud leg them at thinkprogress, pointed out she did what? No Republican in the last two years have been willing to do. She stood up to Trump to his face in public, in front of cameras. That is what happened yesterday. Trump was sitting there trying to tell them, give me the funding for my border wall.

And Pelosi straight up said, no, you’re not going to get it. You don’t have the votes. He countered by saying, no, I know I do have the votes. Then chuck came over and finally spoke up and said, yeah, we’re, we’re not gonna do this, and then Trump in true Trump fashion. He said, the following, he said, I’m proud to shut down the government for border security. Chuck. I will take the mantle. I will be the one to shut it down. I’m not going to blame you for it. That’s on tape. We have a video of it. Everybody can see it is online all over the place. It’s on twitter. It’s on facebook. It is everywhere. Donald Trump saying, I’m not going to blame you for it, so it’s got to be really interesting when the government does shut down to see how Donald Trump tries to walk back that comment or denied that he ever said it in the first place because that is 100 percent what’s going to happen, but let’s get to the big part.

Right after Donald Trump was publicly humiliated by Nancy Pelosi, Nancy and chuck left, and then Donald got super pissed. Maybe he was mad that pence appeared to sleep through the whole thing. Who knows? Maybe he was mad that he got owned on national television by Nancy Pelosi, and to a lesser extent Chuck Schumer, but according to Los Angeles Times, White House correspondent, a Eli struggles, Trump grabbed his papers, walked out of the room, got mad, and threw his papers all over the room. Just throw them angry, a temper tantrum that you would expect from a three year old coming out of a man who is well over the age of 70. That is how Donald Trump reacted to the fact that people actually stood up to him. They told him no, and they got him to say that he’s going to take the blame for the government. Shut down. Donald Trump did not walk out of that meeting with a shred of dignity, and that’s what was so infuriating to him.

And that’s what could have been happening for the last two years. Had Republicans shown the least bit of a spine, but we weren’t going to get that from Paul Ryan. We weren’t going to get that from Mitch Mcconnell, but we did it yesterday from Nancy Pelosi. So I know there’s been this big talk about pillows, theater leadership, and a lot of people didn’t want it low. Most people did want it. What she did yesterday showed how effective she can be and as long as we get that Nancy Pelosi for the next two years, then hell yeah. I don’t think anybody would have a problem with that. That Pelosi in the White House yesterday is the Polosi that we’ve been needing, the Polosi we have been wanting and the Pelosi that this country is desperately needing at the moment. So if she keeps this up than hell yeah. More power to you. Nancy. Maybe tell chuck to buck up a little bit too and start acting like he also has a backbone. Half the time he looked as sleepy as Mike Pence. But what happened yesterday in the temper tantrum that Donald Trump through after they left, is a clear indication of how exciting the next two years are gonna be when more and more Democrats and maybe they’ll bring some Republicans with them, continue to stand up to Trump and tell him no.