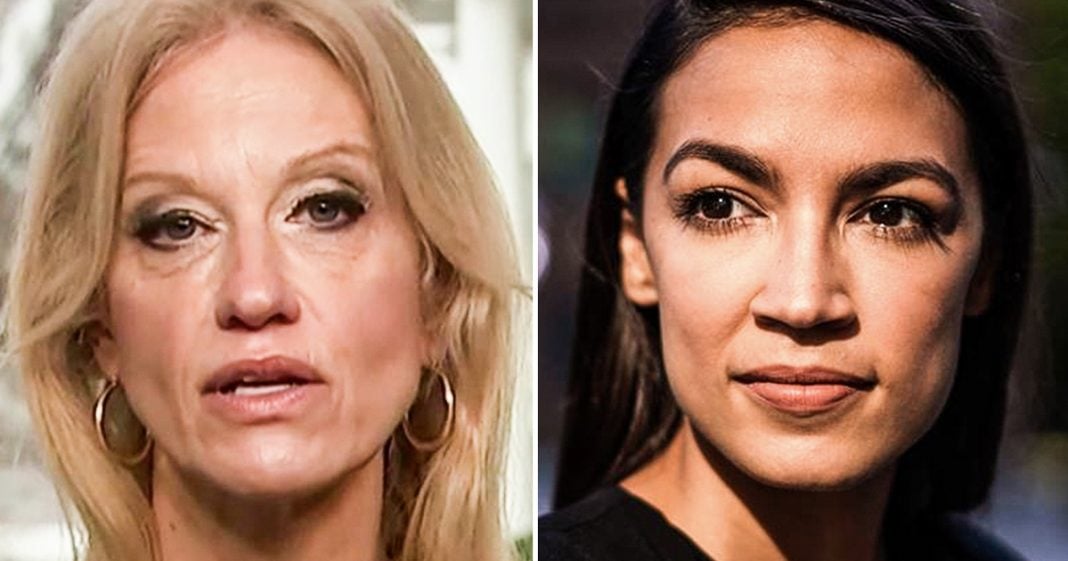 White House counselor Kellyanne Conway decided to take a swipe at Representative-elect Alexandria Ocasio-Cortez in a recent interview, dismissing her as a “29-year old who doesn’t know much about anything.” This was in response to Ocasio-Cortez stating that outgoing White House Chief of Staff should apologize to Democratic Representative Frederica Wilson. Conway shouldn’t be so quick to claim that someone else is clueless, given her own history and the fact that she works for the dumbest human being to ever occupy the Oval Office, as Ring of Fire’s Farron Cousins explains.

With all of the recent turmoil happening inside of the White House and the individual one revelation and John Kelly leaving a Kellyanne Conway has managed to kind of fly underneath the radar a little bit. She’s no longer the big story from the White House. While she did attempt to change all that earlier this week on Tuesday when she went on Fox News and said the following about Alexandria Ocasio-Cortez, here’s what she said, this 29 year old congresswoman who doesn’t seem to know much about anything. When you ask her basic concepts about the economy or the Middle East or military funding, it’s really embarrassing and for her to even use a slur against him yesterday, I won’t repeat her name or the slur. Now what she’s talking about is the other day, Alexandria Ocasio-Cortez when after John Kelly on twitter didn’t even go after him. She called him out for the time last year when he lied about something democratic.

Representative Frederica Wilson allegedly said, except that she never said it. Nobody has ever been able to verify that she said it. There’s no video of it. There’s no recordings of it there, no jotted down notes of her saying this. She didn’t say it, but John Kelly during a speech said that she did. He lied about what she said to make her look bad. John Kelly did that on his own, Ocasio-Cortez decided to call them out for it once again before he leaves office and she called him a coward. She said specifically that not apologizing is not a sign of strength. It is cowardice. That’s what she said. So I’m assuming that’s what Kellyanne Conway is referring to as the slur. Cowardice is the slur. Now, here’s the bigger part of this. Um, you know, this, this woman who doesn’t know anything about anything according to Kellyanne Conway, referring to Ocasio-Cortez, she knows a hell of a lot.

For example, she knows how to upset the power structures. She knows how to get things done in dc before she’s even been sworn into office. I mean, look at how much she has accomplished along with several of the other new members of Congress who are coming in as true progressives. They have already done so much. Hell, I’d argue they’ve probably done more than that guy that you call your boss Kellyanne, and they’re going to do even more when they get into congress. If you’re saying she knows nothing about anything, maybe you’re referring to that one time when she said the wrong word and said three branches of Congress instead of three branches of government, which she very quickly corrected by the way. Yet conservatives have jumped on it to say, oh look, she’s not that good. If we’re going to talk about people saying the wrong word or having a typo maybe here and there.

Then I don’t know if there’s actually a smoking gun. Uh, but I think the covfefe is on the wall at this point and we all understand that the real person in dc who knows nothing about anything is Donald Trump. And by Extension Kellyanne Conway, the woman who coined the term alternative facts to basically give a pretty name to lying to the American public. Kellyanne, you have no standing whatsoever to attack anyone in this country as allegedly not knowing anything. Because if there is one person in DC that is dumber than the rest, that clearly doesn’t know anything about anything that’s happening in this country or around the globe, it is Donald J. Trump the dumbest human being to ever occupy the Oval Office and you’re not that far behind him. Kellyanne, you sold your soul long ago so that you could go out in front of the American publicly, blame others, play the victim while being one of the most vile and nasty human beings that has ever graced our television sets.