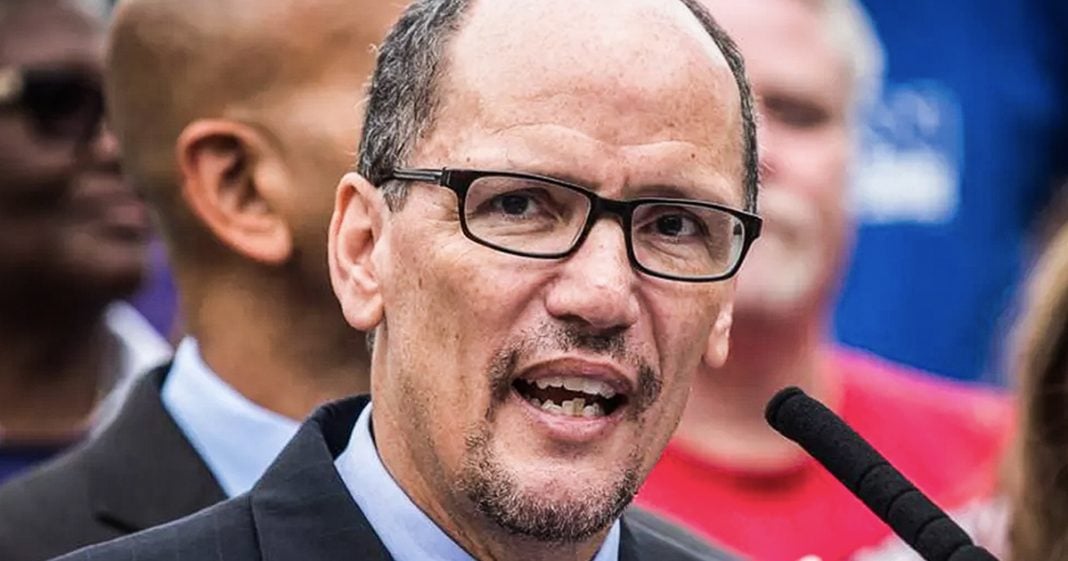 The DNC issued a new set of rules this week, and one of those new rules is that staffers at the DNC have to remain neutral during the Democratic primaries. The organization is hoping to avoid a repeat of the 2016 election where they were clearly pulling for Hillary Clinton the entire time. These new rules are a good first step, but only if they are actually enforced. Ring of Fire’s Farron Cousins discusses this.

Earlier this week, the DNC unveiled a new set of rules that are going to guide the party through the 2020 presidential election, and among these new rules is a set of rules that will actually prohibit DNC staffers from taking any side in the 2020 Democratic presidential primaries. Here is a specific list of what this new rule is going to do. It’s going to prohibit staffers and officers from financial contributions to particular candidates, attendance of events that could suggest partiality public statements or social media post espousing presidential preferences, internal communications, expressing views for or against Democratic candidates, and even gestures like displaying bumper stickers or lawn signs for individual campaigns. So what the DNC is trying to do right now is makeup for the mistakes of the past. They understand that thanks to the email leak, uh, regardless of what you think about the email leak it happened in, those emails are authentic. The DNC was clearly trying to push one candidate over the other. Those emails show that they had actually talked about staffers, at least at the DNC, had talked about using Bernie Sanders, Jewish religion against him.

That was from the DNC, I mean, I know you would expect that from the Republican Party, but this was done at the DNC because they wanted to elevate their candidate of choice. Hillary Clinton, so now they understand, look, we got popped big time. We were made to be a national embarrassment. There’s still a lot of rightfully earned distrust for the DNC right now, so we’re going to do what we can to try to fix it. We’re going to put this new rule out here and hopefully everybody just moves on after that. Well, this is only half of it, right? It’s one thing to put a new rule in place. It’s another to enforce it. So the big question remains as is the DNC actually going to be honest and keep their people honest and keep them from breaking these rules. That part I’m not so optimistic about. I mean after all this is a DNC that also refused to make a part of the party’s platform that we don’t want fracking in the United States.

So the chances of them actually enforcing this, of having somebody go through and monitor to make sure nobody’s breaking the rules, slim to none in my opinion, but I guess you got to give them a little bit of credit for at least trying to give the appearance of being impartial, of saying, look, we’re not going to interfere. We’re just going to sit here. We’re going to raise money, we’ll do opposition research on Republicans and and that’s it. And then once we have the front runner, the person who’s getting the nominee and they get the nominee, a nomination, a, we’re going to go ahead, then we can support them. That’s what we’re going to do as a DNC. Now. That’s what they should do. That’s what they always should have done. But that’s not the case. These new rules are going to be incredibly difficult to enforce. They’re going to be difficult to police and they’re going to be very difficult to punish after all what’s going to happen the first time a staffer gets fired for saying that they prefer a candidate a over candidate b.

that’s going to be a national headline. That’s going to make the DNC look even worse. Now, I support these rules. Don’t get me wrong on that. Again, this is what the DNC always should have been, but I can also see this backfiring spectacularly because that’s what tends to happen when the DNC does things because they don’t fully think them through. They have these guidelines. They need to enforce them, but they also need to make sure that people understand that if you break these rules, if you do not go by this organization standards, you are subject to termination and you don’t get to go out there and whine about it because you were completely warned that this is what we’re going to do. That’s going to be the tricky part. Avoiding any negative press in case somebody does get fired for these rules, but then again that would also require the DNC to enforce and police them, which as I previously mentioned, not quite sure that’s going to happen.