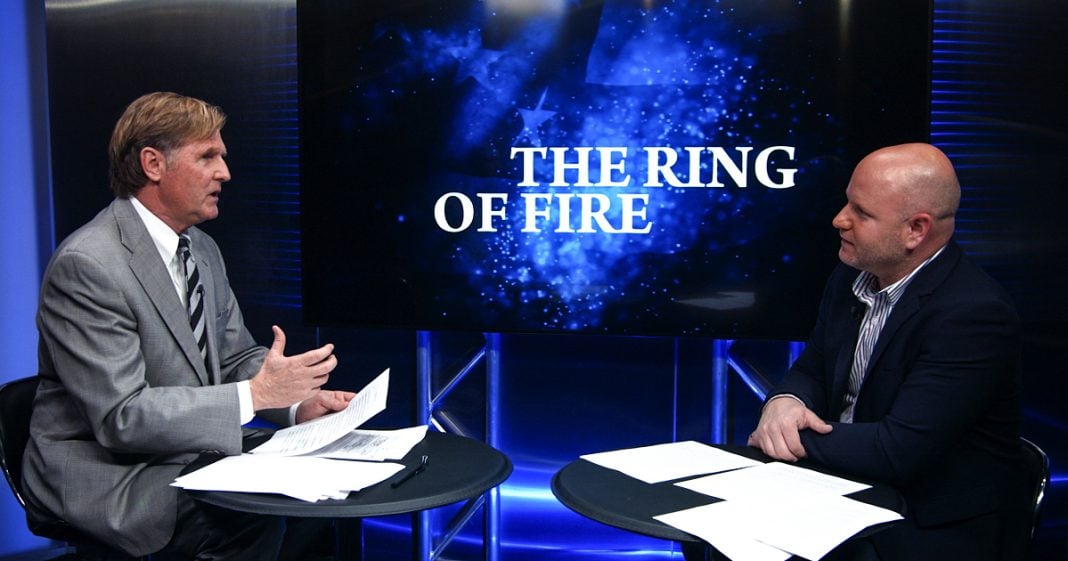 The group “No Labels” has been stiffing their contractors for work performed this year, according to a new lawsuit. But that’s just the beginning of the problems for this group, as new reports have uncovered their corporate donors pulling their strings. Ring of Fire’s Mike Papantonio and Farron Cousins discuss this.

Farron Cousins: The group No Labels has been stiffing their contractors for work performed this year according to a new lawsuit, but that’s actually just the beginning of the problems for this group as new reports have uncovered their corporate donors who are actually pulling the strings. This is a story I actually talked about a little over a week or so ago. No labels stiffed they’re contractors all year. Millions of dollars for work performed in the mid terms. Now they’re facing a comeuppance and unfortunately for No Labels, it also puts their name back in the news. And…

Mike Papantonio: You know what’s so funny about this? Think back, the first time we heard No Labels, we came to the same conclusion that we’re going to talk about right here. First of all, No Labels is a fraud.

Mike Papantonio: Like it or not, that is the new Democratic Party. Matter of fact, the last series of elections even showed that. The centrist win every time because the democratic money goes… there’s some few exceptions, you know. Obviously Cortez up in…

Mike Papantonio: Up in New York. She’s an exception to that. But the big money, these guys are the people who pay for the elections. Go take it from there.

Farron Cousins: Well, yeah, and you’ve got Berkshire on there. You’ve got a couple of food, you got Silicon Valley venture capitalists.

Farron Cousins: Apollo Global Management, the Loews Corporation, which is a hotel chain, not the home improvement. Walmart is funding these. But here’s the thing, and this is what No Labels wasn’t paying their contractors to do, is that No Labels this year was running centrist, moderate Republicans against Democrat incumbents who had maybe gotten a little too progressive. Now I didn’t see these people getting too progressive.

Mike Papantonio: Well, that’s what they said. Oh, you know, the Democrats have become so progressive, we have to move to the Republican. Now, who is this? This is Mark Penn.

Mike Papantonio: Who used to be, who is one of the key advisors for the Clintons and has been for decades.

Mike Papantonio: He actually invented Bill Clinton a lot of ways because he’s the one that had Bill Clinton out of there talking about, you know, we really need to embrace Wall Street. We’ve really missed the boat here. Wall Street is us. We Are Wall Street. Remember? That’s what invented Clinton. And then all of a sudden the American public started saying, what? I don’t get this. Why are you taking up for the pharmacy industry? Why are you taking up for the healthcare industry? Why are we siding up with the energy industry? Because that’s what, that’s Bill Clinton’s history. I mean, Bill Clinton never saw a corporate dollar that he would not take. And so that was Mark Penn. So take it from there.

Farron Cousins: Well, this exposé of No Labels which the Daily Beast just put out, which is phenomenal.

Mike Papantonio: It was phenomenal.

Farron Cousins: People need to take a look at that and understand that there is no such thing as no labels. There’s no such thing as centrism. There’s corporatism that doesn’t want to pick a side because they want to be on both sides. And that’s what’s happening. This is something we’ve talked about with the pharmaceutical industry, is that when you have corporations that have billions upon billions of dollars because they’re price gouging consumers, they’re able to take that money, which is what No Labels does and put it on both sides almost evenly. So that way if Republicans win, you own them. If Democrats win, you own them.

Farron Cousins: Yeah, and No Labels wants to sit there in the middle, giving money to the non racist people in the Republican Party, and the non progressive people in the Democratic Party.

Farron Cousins: And that’s the center that they’ve created. But all it is, is just shills for corporation who may be good on social issues sometimes.

Mike Papantonio: You almost can’t tell the difference in parties.

Farron Cousins: You can’t when it comes to that.

Mike Papantonio: No Labels means, you know, we’re no different. Democrats are just like Republicans. That there’s no distinction and we haven’t carved out anything for ourselves that we can say is really good for the American public. That what…. so you mentioned something, No Labels came out with their talking points were in the last election that we are going, basically we’re going to be hostile to non centrist candidates. Right? And they were, they raised… they didn’t raise money. They were… financially, No Labels has been a train wreck.

Mike Papantonio: It has been a dysfunctional train wreck disaster. And now Mark Penn, the irony here is just so funny when you really think about it, Penn, who’s this former political strategist for Bill Clinton, he’s caught up in the middle of it and it’s kind of like, I got yak You know, it’s kinda like I got you moment where you see this is what this guy has really been about. And he invented Bill Clinton around this notion.

Farron Cousins: Exactly. And now he’s trying to bring that to the country. In a country that doesn’t want it by the way.

Mike Papantonio: And that’s Hillary would have been.

Mike Papantonio: Hillary would’ve been just another Mark Penn centrist Democrat that yeah, really good on social issues, wants to embrace, you know, in her mind, embrace the social issue, and totally ignore what really happens to the American public when Wall Street tramples all over him. And that’s what, that’s what really centrist means.

Farron Cousins: It is. And what we’re looking at here now with this No Labels group is they want to spread that. They want it to become almost this centrist infection in politics because all they want to do, like so many of these other groups, you peel back the surface and look at them. They want to make sure that corporations can do whatever they want to do.

Mike Papantonio: The good news is they’re a failure. The good news is if you sent money to No Labels, you wasted, WASTED a lot of money and I’m good with that. I’m great with Walmart wasting money or Wall Street wasting money, but they wasted millions and millions of dollars trying to, trying to pump up these jack legs and I mean they just, it’s a joke. I guess that’s the happy ending there.

Farron Cousins: Yeah, wasn’t Joe Scarborough part of No Labels for awhile too?

Mike Papantonio: Yes, well actually, Joe went on, and a lot of people don’t know this, Joe used to be my law partner before he started with Msnbc and yeah, that was part of his talking point is what an important movement the No Labels movement is in America. Really?