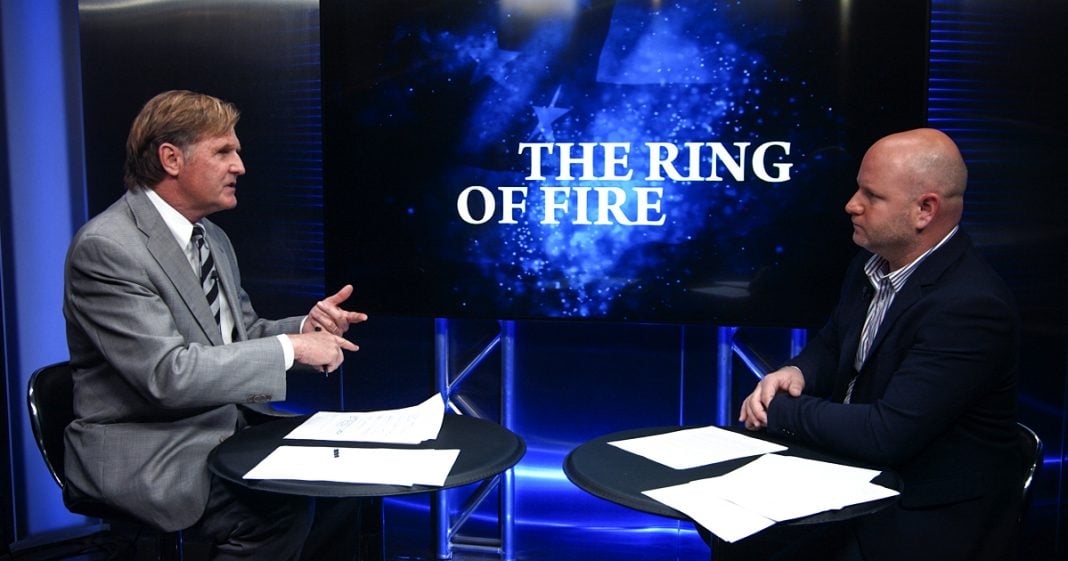 In addition to the deadly fires that brought destruction across the state of California, new reports suggest that the fires also helped to spread toxic nuclear waste from contaminated sites. The corporations responsible must be held accountable and safeguards have to be put in place to insure that this doesn’t happen again. Ring of Fire’s Mike Papantonio and Farron Cousins discuss this.

Farron Cousins: In addition to the deadly fires that brought destruction across the state of California, a new report suggests that the fires also helped to spread toxic nuclear waste from contaminated sites. You know, the people in California, it’s just continuously adding insult to injury with what they’ve experienced, both in terms of the fire and the bad legislation coming out of the state that’s protecting the energy companies from starting these fires, but now we’ve got this report about the fact that the Santa Susana Field Laboratory, decades ago got contaminated with nuclear site and other toxic chemicals. It’s now been burned. Put into the atmosphere, put into the air and is potentially poisoning millions of people in California.

Mike Papantonio: This is ugly on so many levels, so many levels. But what really should infuriate people that were in, that are in even a hundred mile radius of Santa Susana Field is that for about 20 years you have had environmental advocates that say you need to clean up the radioactive problem in this field. You need to clean up the toxic fuel problems in this field. Because both of those things are hugely dangerous to the population. So you have had physicians, you know these physician groups that really try to focus on good social issues.

So this one physician group said years ago, I think it was Physicians for Social Responsibility, came out and said, look, we’ve got this, this a ticking time bomb, and it is called the Santa Susana Field. It is a place where they tried to create rocket fuel, experimented with all different kinds of rocket fuel. They understood that the rocket fuel had all types of physical ailments associated with birth defects, cancer, leukemia, neurological disease, gastro, all types of gastro type.

But, but the point is this, so you’ve had this group that has been pushing the environmental organizations out there, pushing the DOD, pushing everybody that has a stake in this to say, you know what, if we ever get a big fire, if we ever get some type of fire calamity or even a flood calamity that this is going, it’s gonna affect people within a 100 mile radius around here. And sure enough, that’s what happened.

Farron Cousins: Exactly, and what’s happened here at this site is they brought in all this toxic waste as you mentioned, you know, the fuel, a lot of it was just kind of dumped there. And then they actually took these crafts, you know, the aircraft’s some contaminated with nuclear waste because they were used in nuclear testing. They washed them off in this area and then let all that run off go in.

So you’ve got nuclear waste, you’ve got diesel waste, you’ve got jet fuel waste and all of it’s sat in the ground for decades. And then as the scientists are explaining what happened is the vegetation grows with these chemicals in there and then when the fire comes, obviously it burns all this incinerates it and they have…

They said, yeah, we’re going to clean this up. A year ago, you know what’s happened? Zero. And now it was right within the path of the fire spreading that garbage all over a 100 mile radius.

Farron Cousins: And what’s really sad here is that because of the high winds that were taking place during that fire, that’s what allowed this, this toxic smoke to spread so badly. It was the perfect condition that set up this toxic contamination. And we already know first and foremost, the companies like Edison and PG&E, they’re faulty equipment was responsible for these fires.

We know that. They’ve admitted that. There’s no question about it. The California legislature is working to protect them to an extent. I think about 80 people at this point died and the latest fire, the Woolsey Fire and now, or that was Camp Fire. Excuse me.

Farron Cousins: And so now we’re dealing with on top of all of that, toxic radioactive contamination that has the potential to poison everybody in 100 mile radius with cancers, with neurological diseases, birth defects, what have you, for decades at this point.

Mike Papantonio: Now you understand we’re going to be criticized for talking about this because according to these flying monkeys, what’s her name, Suzanne,

Mike Papantonio: Suzanne Spaulding, and her flying monkeys of corporatist that are actually saying that reports like this are hurting democracy because we’re talking about it. Now that’s literally what they’re going around giving speeches to corporate meetings, corporate round tables, CEO round business round table. So we’re going to tell the story anyway because unfortunately this story really was only told by Truthout.

Mike Papantonio: I mean truth out was the first organization that looked at this and said, wow, this is a lot worse than what we thought, and so this story actually tells why it’s a lot worse, doesn’t it?

Farron Cousins: It does. And it also goes to show that at this point in the United States, we’re really living in a bad science fiction movie.

Farron Cousins: Because you had scientists that had been warning for decades, decades that this happened. It was contaminated. Meanwhile, the government, the regulatory capture that we have out there in the state of California, which is supposed to be this liberal bastion of hope, California. It is so corporate controlled.

Mike Papantonio: Yeah, our last great bastion of liberal hope is California, and that’s where all these governmental agencies are owned, they are owned and operated by corporations just like they all are; let me give a shout out to this Duffield character. I didn’t see his first name, but Duffield was this activist along with the Physicians for Social Responsibility.

Farron Cousins: Right. Well, you know, it hurts the corporations who poisoned us. It hurts, in this case, this was a lot of government poison coming from their nuclear tests and things like that.