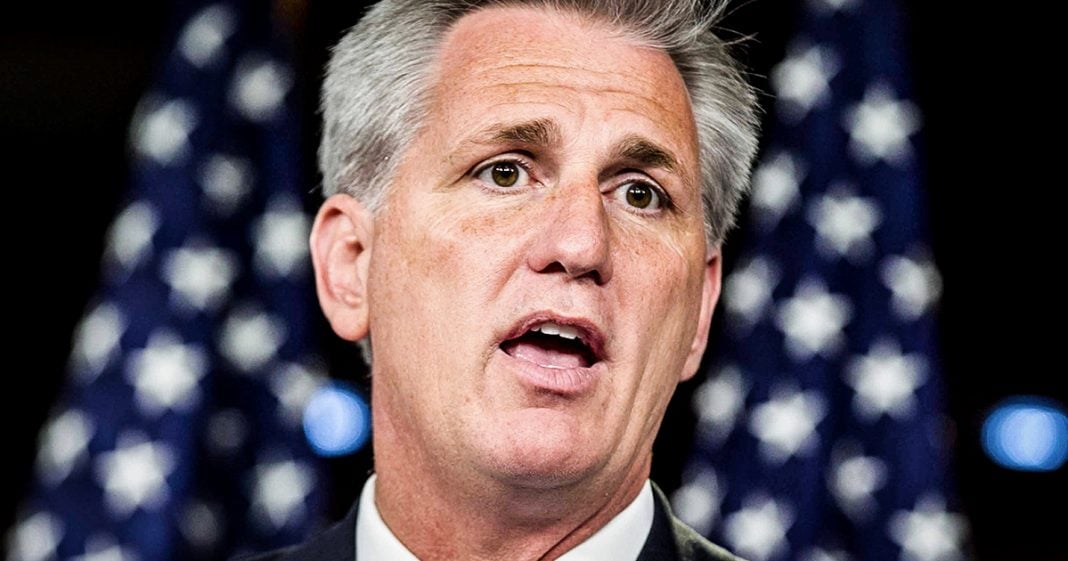 Kevin McCarthy, the current House Majority Leader and soon-to-be House Minority Leader, is currently begging Democrats to not investigate the potential crimes of Donald Trump because it would be a waste of time. McCarthy says that Republicans have already done those investigations, so everything should be cool, and the new Democratic majority can just relax and work on other projects. Ring of Fire’s Farron Cousins explains how McCarthy is actually half-correct in his analysis of things.

During a recent interview with Fox News, Republican House majority leader, Kevin McCarthy, who in just a few weeks will be the Republican House minority leader, said that Democrats really don’t need to spend any of their time investigating the potential crimes of Donald Trump once they take the majority in the house. Uh, partly because, you know, Republicans already did that. We didn’t find anything so they can just move on. We totally did those investigations. Don’t worry about it. So Democrats, you can just kick back, relax, and you know, maybe we can work together on some legislation. In fact, that’s actually not too far off from what McCarthy said next, he said, you know, I think there’s other problems out there that we really should be focused on and my belief is, let’s see where we can work together. Let’s move America forward. So he immediately goes from, please, please don’t, don’t investigate Donald Trump or any of the crimes of this administration.

And Hey, I bet we could work together on some things. That’d be really cool, right? I mean, you know, you come over to my office, we just, you know, hang out and talk about things and whatever. I want to be your friend. Please, please don’t investigate my boss. Please don’t investigate my party. We’ve done a lot of really bad things, but we already investigated it too and we didn’t do anything. McCarthy is absolutely crazy right now because he doesn’t know what’s going to happen and that brings me a little bit of joy. It truly does. Republicans have had this absolute power here in the United States for two full years and they have used it to absolutely piss all over the United States constitution. But here is a point, and I’m may disagree with me on this, but here’s a point that I think McCarthy is correct and I do not think democrats should spend all their time investigating Donald Trump.

I think they should investigate Donald Trump, but I think that needs to be a part time, small fraction of what they do in the new congress. You know, Republicans are not going to work with you. Even McCarthy’s little half-assed pleading with you here. He’s not going to work with you on anything, so what Democrats need to do first and foremost, when they take back the majority is work on legislation. You know it’s not going to get passed, but you damn sure better have something to take back to your constituents in 20, 20 to show them that you tried to show them that you attempted and to point the fingers at the people who voted it down. The people who vote down the green new deal, the people who vote down Medicare for all the people who vote down debt free college or student loan forgiveness. Those are the issues that you were going to win the campaign on and once you’ve got them on the ropes with legislation and issues, you deliver the knockout punch with the investigations because yes, investigations do need to happen, and I’m not talking about collusion investigations.

I’m talking about investigations into the policies of this administration. Why did they lose thousands of children that they had separated from their parents? That sounds like something that needs to be investigated. Why are they actually not doing anything about the opioid crisis here in the United States? Sounds like something should be investigated. Why is Ivanka Trump using private emails when we’ve already had lots of discussions that private email used as bad when you’re a government official, maybe spend a day or two investigating that just to kind of put them on edge a little bit. I admit that one would probably be more of a revenge investigation, but if you’ve got the time, maybe a long weekend, maybe throw that into the mix as well, but Republicans are terrified. They know the Democrats have subpoena power. They know that this administration, not just in the campaign stuff, but in their actual administration, they know they’ve got stuff to hide and the Democrats should do a good job of kicking over those logs and finding it. As long as it doesn’t come first. The most important thing to thing the American public hired you to do is to legislate. Once you get that taken care of, then spend as much time as you want on these investigations, but not a second on the investigations until you have that legislation ready to go.