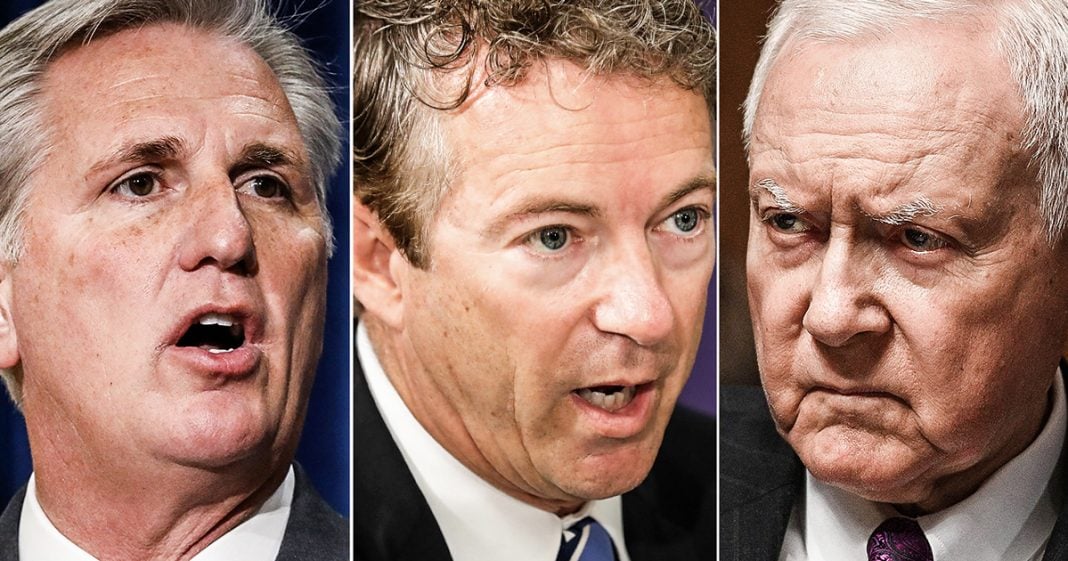 The Republicans in Washington, D.C. are tripping over themselves in their attempts to convince the world that the felony activities Trump has been implicated in are really not a big deal. Republicans like Kevin McCarthy, Rand Paul, and Orrin Hatch are saying that these crimes are so minor that we shouldn’t even waste any time on them. The American public disagrees, and Ring of Fire’s Farron Cousins offers an explanation why.

Here’s a riddle for you. When is a crime not a crime? Well, it’s actually not a riddle because a crime is always a crime. Even when the president does it to contradict Nixon’s old saying that it’s not a crime when the president does it. Um, no, it 100 percent is a crime is always a crime, but apparently the Republicans in Washington dc still don’t quite understand that. And in the last couple days they have been essentially tripping over themselves, trying to come up with excuses for those damming a court documents filed by molar and the southern district of New York last Friday. First and foremost, we have Kevin McCarthy, the current House majority leader and the incoming house minority leader who went on Fox News recently and he said, you know, we have to understand that this is small potatoes, right? I mean, if we’re going to start investigating every campaign finance violation, than a lot of members of my own caucus would have to go.

Fantastic. That’s the point. That’s exactly what we’re getting at here. Kevin McCarthy. I think maybe you understand it, except you also have to understand that it is illegal campaign finance is a problem, but not the laws. It’s the lack of the laws. It’s the lack of enforcement and it’s the fact that corporations have all of the power. What we’re talking about here though, doesn’t even involve corporations. It’s just the president authorizing an illegal payment to aid his campaign that is now and always has been illegal. So you can spin it however you want that. Oh, we’d lose a lot of Republicans if we investigated stuff like this. And I think from the public, both the left and the right would probably say, well then that sounds like we need more investigations, doesn’t it? Senator Rand Paul, the alleged libertarian slash republican slash, he has no idea what he believes or stands for.

Uh, went out there and basically said something similar on a Sunday. He told Chuck Todd, he said, I don’t know what’s illegal about building a hotel in Russia. We have to decide whether or not criminal penalties or the way we should approach criminal finance. So you say you don’t know that it’s illegal to build this thing, but we have to also look the laws when we’re talking with criminal finance. Um, so are you saying that this is criminal finance? Paul also went on to talk about campaign finance and you know, how we, we, you know, over criminalize campaign finance. That’s what I said over criminalize campaign finance. Again, we should be, we should be getting money out of politics and we should be taking a closer look at every single one of you. And as for the hotel in Russia, that, that’s not even what any of this is about.

Like why are you bringing that up? Rand Paul? Nobody’s worried about that at the moment. We’re talking about the president authorizing an illegal payment to a porn star. So she didn’t take his campaign. And then finally we have Republican Senator Orrin Hatch, the guy who was adamant that Bill Clinton be held accountable for his lying under oath. Orrin Hatch says, Democrats will do anything to hurt this president is what he told a CNN the other day. Then when asked by the host, you know that the president have been implicated in the crime on Friday, Orrin Hatch responded by saying, okay, but I don’t care. All I can say is he’s doing a good job as president. Okay, so at least Orrin hatch out of the three here is being a little honest. He doesn’t care. Screw it. Yeah. He broke the law. I don’t care. He’s a Republican and he’s doing all the Republican things that Republicans like to see.

Why don’t you look at the banking industry here in the United States. They get away with so many crimes that would make your head spin. I’m lucky enough to have been able to look at some of the internal documents in some of the lawsuits against these banks. They know what they’re doing is illegal and they also talk about the fact that they’ll never really be held accountable for it, so they keep pushing it a little further each time. Go a little bit further with this crime a little bit further with that one because they know at the end of the day they’ll never be held accountable and they write little different here though. I would hope that we would hold our politicians to a little bit of a higher standard, and if these Republicans are freaking out that, oh my God, all campaign finance violations could be investigated, then I think those are probably the guys we need to start with the investigations.