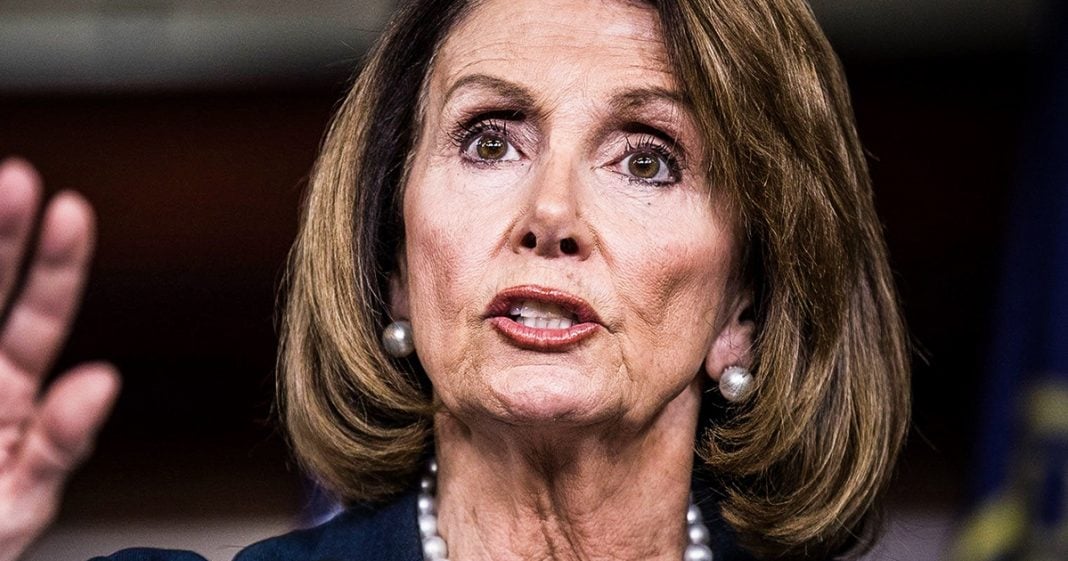 Around 1,000 activists showed up on Capitol Hill yesterday outside the offices of Nancy Pelosi and Steny Hoyer demanding that the two Democrats embrace the Green New Deal that so many other Democrats are supporting. More than 140 of the activists were arrested for refusing to move, but their message was loud and clear: Our future, and the jobs of those Democrats, are 100% dependent on this Green New Deal. Ring of Fire’s Farron Cousins discusses this.

Yesterday, more than 1000 young activists and their allies flooded the halls on Capitol Hill to demand that lawmakers sign onto this green new deal. Uh, this group of people, a lot of them, part of the sunrise movement want our members of Congress to take the issue of climate change seriously. And they also understand this is part of what they’re pushing, that if we try to move to a carbon zero economy, carbon zero country, it’s going to create a lot of jobs and overall give the young people in this country a much brighter future and more economic opportunities that are currently nonexistent. And so they went to Capitol Hill. They went to the halls of Congress. They specifically were going after Nancy Pelosi and Steny Hoyer to top Democrats. They wanted to make sure that these two people sitting at the top absolutely signed onto this green new deal or understood its importance and weren’t going to screw with it.

That is being pushed by the younger members of Congress, the newer members of Congress who actually care more about legislating than they do about going out and talking at fundraisers. That was the goal of these young activists, 140 of them yesterday at least were arrested. One hundred and 40 arrested. Now they were arrested, not because they just were there. They wouldn’t get out of the hallways, blah, blah, blah. The same BS we hear anytime a protester is arrested, but it’s not about that. I think they fully expected that this was going to happen. It’s gross. It’s horrible that we still do this, but I think the message may have been received. I think the message that they were out there pushing is being received by members of Congress and I think these same members of Congress, including Nancy Pelosi and Hoyer, they understand that if they do not take this seriously, then their days are numbered.

They got roughly two years left in office before a good progressive primary challengers shows up and sends them off into oblivion because that’s what will happen if these Democrats do not sign onto this deal and more importantly understand why it is needed. We’ve had a lot of Democrats that have come forward and say, I’m going to sign onto the green new deal too, but they’re not doing it because they understand the importance or because they want to make a change. They’re doing it to save their ass because they understand that part of it. They understand, if I don’t do this, if I don’t get on board, I’m probably gonna lose my job in two years. Things are changing in the United States and they’re changing rapidly and if you’re not progressive enough, if you’re not actually doing your job, you’re going to lose it, and that’s why some of these folks have on to it.

The rest of them, the ones pushing it, the ones who started it, they’re pushing it because they understand why it’s needed and I hope that Pelosi and Hoyer and the other 100, or excuse me, I believe it was actually 50 members of Congress that these young activists tried to approach yesterday. I hope they understand why it’s needed as well. Yeah, I guess it’s good if they sign onto it because they’re worried about their job and they help push it through, but if they don’t actually understand why we need this in this country, why we need to move to a carbon zero economy, than even them signing on is not going to be enough. They have to realize the importance of this issue and why these young activists are showing up at their office. It’s not because they want to get arrested. It’s not because they want to be in the headlines. A few people, if any, talked about this when it happened yesterday. It’s because they want a better future. We’re at the very least at this point. They want a shot to even have a future.