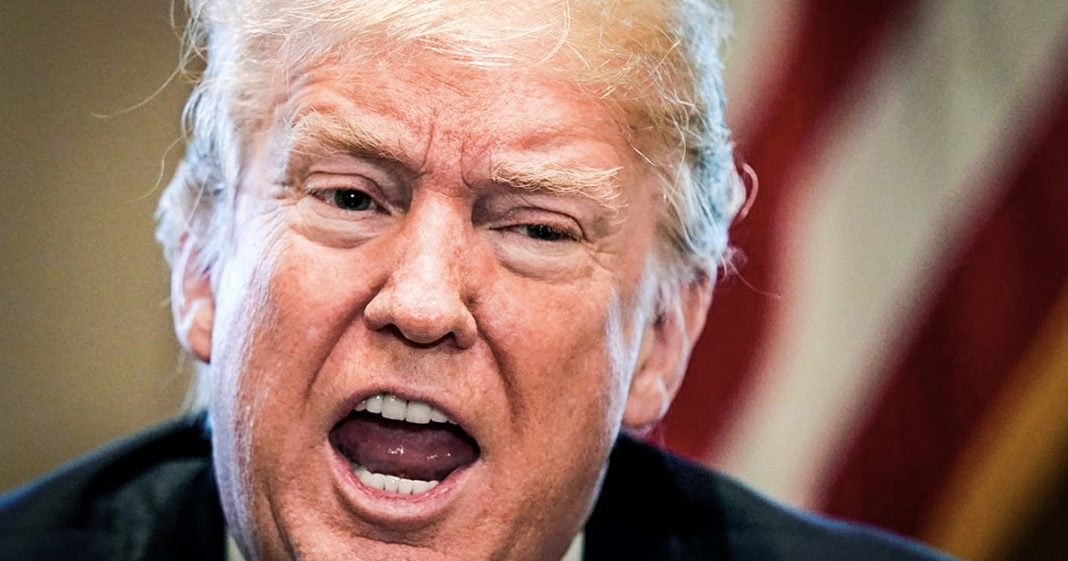 Donald Trump is furious that he has not yet received funding for his border wall from the Democrats, even though he has promised on multiple occasions that Mexico is totally going to pay for it. So he did what he does best and took to Twitter early Tuesday morning to let us know that he’ll start taking money from the military and have them build the wall if he has to. Ring of Fire’s Farron Cousins discusses this.

On Tuesday morning, Donald Trump apparently woke up angry about something and he decided to take out his anger on the border. Now in a series of tweets, the president first acknowledged that the caravan, certainly 100 percent was forming and was headed to the United States, but they’re not anymore. I’m allegedly according to the president because they couldn’t get through our makeshift fences and our border patrol. What actually happened was that a lot of them never made it here to begin with. As most of us suspected, they wouldn’t. They either went to other places, they were accepted into Mexico and yes, some were down at the border. Those are the people that were tear gassed. So yeah, kind of hard to get through walls of tear gas when you’re three, four years old. Nonetheless, Donald Trump says that it’s time to build that wall. And He, uh, tweeted out that he’s going to have a meeting with Pelosi and Schumer coming up very soon, and hopefully he will get his funding from them.

Now, I want to come back to that point in just a moment, but here’s an even bigger one that the president tweeted out the final tweet of this five tweet tirade. People do not yet realized how much of the wall, including really effective renovation has already been built. If the Democrats do not give us the votes to secure our country, the military will build the remaining sections of the wall. They know how important it is. Now, first and foremost, uh, correct me if I’m wrong, but wasn’t Mexico is supposed to pay for this thing. I mean, we’re. We promised that every couple months we were told that Mexico’s going to pay for this wall. Mexico’s paying for it, Mexico’s paying for it, and now this man is basically on his knees begging Democrats to give him the money he wants for his wall. And if they don’t give it to them than hell, he’s going to take it out of the military budget, which is already bloated and overblown and could easily pay for it.

And then he’s going to have members of the military actually build the thing. Now that’s a scary thought because yeah, the military certainly has enough money in their overblown budget to go and pay for this thing. They’ve got the personnel and the staffing to easily construct a concrete and brick wall, but if that happens, that kind of puts us in an awkward place as a country, right? Suddenly we’re this country with a big wall on our southern border. We are the closed off isolationist. We hate foreigner country. At that point it sends a horrid message to the rest of the world and it’s a message that many people are going to start using against us. It’s not something that a lot of Republicans have put any at all of thought into as to what other countries are going to do to us if we do this to the people below our southern border.

Now back to the other point, he says he’s got a meeting coming up with Schumer and Pelosi about funding the wall. If either of them cave, if either of them give him money for this wall or money that could eventually be used for the wall, that’s it. There is no second chance. There is no, oh well I had to do this. No, none. You do it. You’re gone. You’re out. You should lose every bit of support that you have ever had in this country as Schumer’s already found out, and this the guy who already caved once said, we’re going to give you almost 2 billion for this, and then had to backtrack and say, no, no, no, no, no. The 2 billion or the one point six, whatever it was a. it’s not for the actual construction of the wall, it’s just for other border security, which the president could easily just use to build the wall.

Instead, Schumer thinks we’re idiots and Trump thinks we’re idiots. They’re actually quite a good pair together and I know Schumer is going to cave. That’s what humor does. The question is, will Pelosi with his big democratic wave behind her, these new hugely progressive members coming into the House of Representatives in January, is she going to hold steadfast or she going to follow with Schumer’s footsteps and cave once again to the president to build a wall that most people realize is going to do nothing to solve our immigration issues. This is 100 percent on Pelosi, and if she makes the wrong decision here, there is no coming back from that for her.