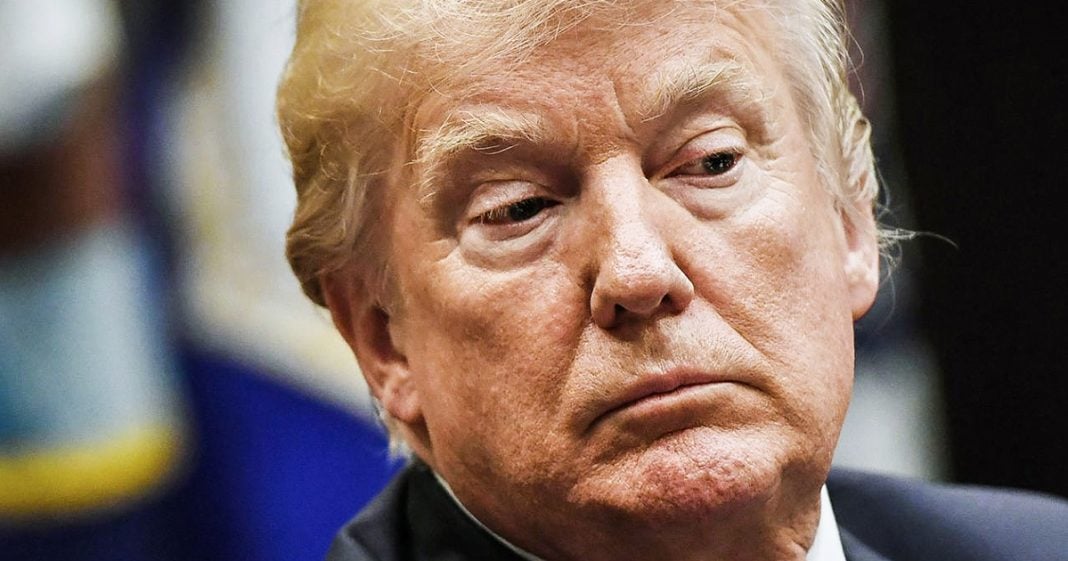 After Democratic Senator Richard Blumenthal referred to Donald Trump as an unindicted co-conspirator, the President attacked Blumenthal on Twitter with an obscure reference to his military service. Aside from completely misstating what had happened with Blumenthal’s record, it showed how tone-deaf and irony-deficient the President truly is. Furthermore, it showed us how crazy the man has truly become. Ring of Fire’s Farron Cousins discusses this.

Over the weekend, Donald Trump engaged in what might be one of his most absurd, bizarre, and unnecessary Twitter rants this time it was against Democratic Senator Richard Blumenthal after Blumenthal referred to Donald Trump as he is, which is an unindicted coconspirator. Based on the filings that were released this past Friday, Donald Trump then took to Twitter to say the following, “Watched Denang Dick Blumenthal and television spewing facts almost as accurate as his bravery and Vietnam, which he never saw as the bullets whiz by Denang Dick’s head as he was saving soldiers’ left and right. He then woke up from his dream screaming that he lied. Next time I go to Vietnam, I will ask the Dick to travel with me.” I will ask the Dick to travel with me, and he put the “Dick” in quotation marks here. Okay. Several things to unpack from this psychotic rambling of the president of the United States here. First and foremost, if you’re not familiar with what the president is actually referring to, it’s an issue that was resolved roughly a decade ago where Blumenthal had misspoken about his service during the Vietnam War.

He did not go to Vietnam, but unlike Donald Trump, he did enlist. He was a part of the U.S. National guard here with the United States Marines and he, uh, a signed up with them after he got his education deferments. So he got his deferments, went to school, school’s over, he signs up and does his duty, didn’t have to go to Vietnam. He wasn’t part of the group that did. I’m sure there was probably some favors that exchanged hands, you know, wealthy, privileged kid maybe didn’t want to go over there with scared, but hell, at least he did something which is more than what we can say of the president of the United States, cadette bone spurs who did everything he could to avoid conflict or signing up at the military in any way possible. Now that’s one thing. Obviously everybody on Twitter responded to in these tweets. The fact that Donald Trump didn’t go to Vietnam, he had his bone spurs.

He was a little sissy kid, didn’t want to go over there and do anything. Whatever. We get it. That’s known. Everybody understands that and they also understand the hypocrisy. And the irony of Donald Trump tweeting this out about somebody when he himself didn’t do that thing either. Here’s what gets me about it. The president is psychotic. The president is absolutely mentally unstable and should immediately be removed from office. How about that? How about we go with that talking point. Instead of talking about the hypocrisy of he didn’t go to Vietnam either. Everybody knows that these tweets from the president show that this man is insane and I don’t say that lightly. It’s not like, oh, this guy’s crazy. This is insane. This man is clinically and certifiably insane. The 25th amendment should have been invoked months ago. This man needs to undergo very serious psychological evaluations and further more because he is not alone in this.

If anyone in this country reads these tweets and says, Hell Yeah, how? Yeah, that’s my president. Then you’re just as insane as he is. No one in this country should feel like this is okay. That it’s good that the president’s tweeting out about the deck. If you think that that’s okay, then your part of the problem. This is not America. It’s who we are. Now it’s who we’ve allowed ourselves to evolve into, but anybody that actually cares about this country cares about our reputation, cares about our standing with our allies. They don’t approve of this. Anybody with a shred of intelligence in their brains wouldn’t approve of this, and that’s what’s so disgusting about this. To me, this isn’t a partisan issue. This isn’t a “did he or did he not serve in Vietnam” issue. This is a psychotic man. Donald Trump serving as the president of the United States and Republicans sitting idly by wondering, Oh, I wish we could do something about his tweeting.

You have 100 percent of the power to do something about his tweeting. You could have invoked the 25th amendment a year ago and you sat on your assets and chose to do nothing. You own this, his supporters on this and you people are all, every one of you just as horrible, despicable and deplorable as the president himself and no, you can’t change your Twitter handle and say like, oh, the deplorable Mike Jones as if it’s a badge of honor. It’s a disgusting label, but it perfectly describes the people who are out there defending the president after saying garbage like this.