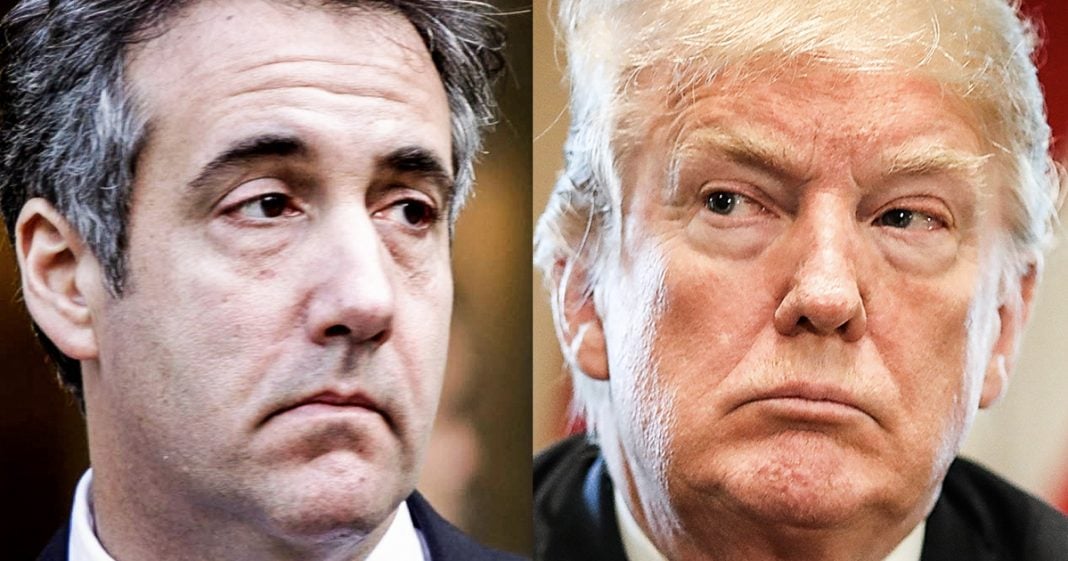 According to Michael Cohen, Donald Trump’s former lawyer and fixer, the President is the one who ordered him to pay the hush money to adult film star Stormy Daniels so that the information did not become public and hurt his campaign. This is a felony, and it is a clear violation of campaign finance laws, regardless of what the President tweets. Ring of Fire’s Farron Cousins explains these implications.

On Friday, the special prosecutor’s office, along with the US attorney for the southern district of New York, made public some court filings that actually seem to directly implicate Donald Trump in a federal crime. Now, Donald Trump, after these filings, became public tweeted out the following instead totally clears the president. Thank you. Now, based on what was in those filings, I think it’s pretty obvious that individual one here didn’t actually read what was in there because yes, Mr. Trump, it did directly implicate you in a felony offense. Here’s what happened. There was a lot of stuff within those filings, a lot of it that said, oh, this person was trying to reach out from Russia to Michael Cohen. We know at this point that a lot of Russians reached out to the Trump campaign that has been made public in these filings. While we do not know Mueller might, I’m assuming Mueller does, is whether or not anybody in the Trump campaign reached back and accepted their offers for help.

So that’s still a big question mark. But what’s no longer a big question mark is whether or not Donald Trump specifically ordered Michael Cohen to make the hush money payment to Stormy Daniels. According to these new court filings, according to Michael Cohen’s own testimony, he made those payments at the direction of individual one who was running for president. Now it’s only listed as individual one. So I guess we’re going to have to speculate, but since this was 2016, um, I’m assuming obviously this was Donald Trump, unless for some reason Hillary Clinton felt the need to tell Michael Cohen to pay off a porn actress. Or maybe it was Jill Stein or the Libertarian guy who I from Gary Johnson forgot his name because he’s so, uh, you know, not memorable. Nonetheless, it’s pretty obvious to everyone. Individual one is Donald Trump. And here’s what this means. Donald Trump’s be going on a tirade the last few days saying, no, that was a personal money that was a financial transaction by a person to another person that’s not a campaign contribution.

Um, what this moron doesn’t understand is that it’s an in kind contribution. We have explained this a thousand times and apparently we’re going to have to explain it a thousand more times because Donald Trump doesn’t want to seem to understand or he wants to convince his followers that everybody else is lying about it. Any money that you spend, whether it is given directly to a campaign or if it’s just money to do something else, if it is to further the cause of that campaign to help the candidate in any way that is considered an end kind campaign contribution. That is what that means. So paying Stormy Daniels, Stephanie Clifford, to remain quiet about their affair so that it didn’t impact his presidential, uh, race. That is a campaign contribution. I don’t care what idiot tweets out that is what that is. And according to Cohen, Trump is the one, 100 percent who directed it.

He coordinated it with Trump. They knew it was happening, they knew the purpose of it. And that is why they did it. Now, the southern district of New York adds a little bit of a caveat in there. And this is, you know, not so good for those of us who want to see Trump fall from grace. They’re not able to say at this point that he knowingly and willfully broke the law. Now to me though, that kind of seems like a BS statement, right? We’ve all heard the expression, ignorance is no excuse. Oh, I didn’t know this was illegal. That doesn’t matter. That’s not a defense that actually works in court. So it is a bit confusing as to why the US attorney in the southern district of New York would even bring that up because whether he knew it was illegal or not, he ordered it.

It is illegal. He did it. That’s a crime. What’s the problem here? At this point, Donald Trump, based on all the evidence, based on all the testimony is by definition and unindicted co-conspirator. That’s what’s happened here. We have conspiracy to violate campaign finance laws. We have the actual violation of campaign finance laws themselves and Donald Trump at this point in addition to being US president, is by definition an unindicted co-conspirator. That also helps to explain to a lot of folks why he’s been freaking out so much on Twitter over the last few days. He feels those walls closing in on him. He knows that this these revelations from Friday. This is nothing compared to the other stuff that we’re probably going to be finding out within the next few months.