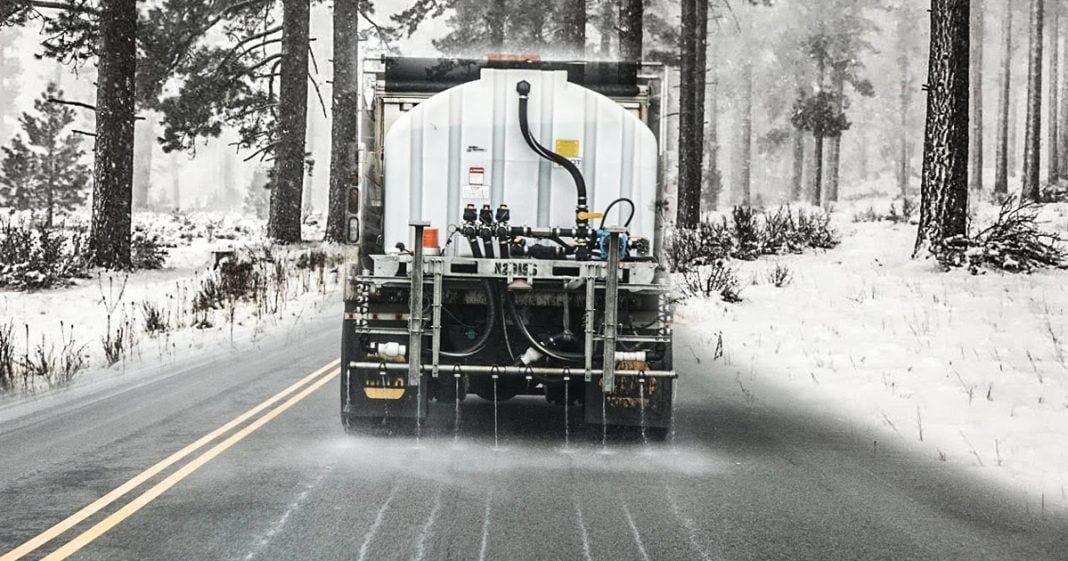 The Ohio House of Representatives has passed legislation that would allow cities to use toxic waste from fracking sites to de-ice roads this winter. This will expose citizens to unprecedented levels of radioactive, cancer-causing chemicals that would be sitting on top of roads and then tracked into yards and homes. The battle over de-icing materials has been raging for years, and Republican-controlled states keep coming up with the most dangerous ideas on how to solve their problems. Ring of Fire’s Farron Cousins discusses this.

Last Thursday, the Ohio House of Representatives actually passed legislation that would allow cities across the state to use radioactive fracking, waste two de-ice roads this winter season. Now, this piece of legislation still has to be approved by the Senate. Then it has to be signed by the governor, but there is no reason whatsoever to believe that those things are not going to happen. They are going to happen. Republicans who control a control of the state of Ohio at the moment want to use fracking waste that is chock full of cancer causing chemicals, many of which we don’t even know about because of those alleged trade secrets that prevent fracking companies from having to tell us what kind of toxic cocktails they’re mixing and pumping into the Earth and Republicans in the state of Ohio think it’s perfectly fine to use this cancer causing, again, radioactive waste to help de-ice roads throughout their state.

Now, here’s the kicker. This was actually perfectly legal and used in the state of Ohio for many years. Up until a couple years ago when they said, you know what? Maybe this isn’t a good idea to expose everybody near the street. It’s getting trapped into homes that’s getting tracked into lawns. It’s seeping down into the first water table, so when people water their lawns come spring, guess what? There’s that radioactive water coming out from the fracking waste. Yeah, not such a good idea. So they banned the use of that and now three years later they’re trying to ban the use of this radioactive water, to de-ice roads. Now, believe it or not, the de icing issue, even though I lived down here in the south, it’s something I’ve had to research for many years now for various environmental groups that I’ve done work for because here’s the thing, most of the things that we use two de-ice roads here in the United States are absolutely hazardous, toxic and can cause cancer, and I’m not talking about salt, I’m talking about the cities across the country that are trying to use coal ash to de-ice their roads.

The states like Ohio trying to use fracking waste two de-ice roads. There are plenty of nonhazardous, bio-degradable alternatives available out there. I had some states, some cities have actually turned to using beet juice because it’s nontoxic, it’s not hazardous in any way. It does just as good of a job at the icing and it’s a lot less expensive, but no, if you do that, you don’t get to buy all these waste products from the fossil fuel industries so they don’t get to make a little extra money because at the end of the day, that is what this is about. How can we give more money to fossil fuel companies? Let’s buy their toxic coal last way, a coal ash waste, dump it all over our roads. Again, people track this into their homes. They track it into their lawns. It seeps down to that first water table, which is where most home wells tap water from to water their lawns.

That’s what kids go play in the sprinklers in the summer there in Ohio, and now we want to make it radioactive. The levels of radium in the fracking waste that they’re talking about using in Ohio are 500 times higher than the legal standard for water in the state of Ohio. Five hundred times higher, this is highly radioactive waste and Republicans in the state of Ohio see no problem dumping that all over their roads, exposing anyone on those roads to cancer causing agents just because they want to buy a little bit more waste and pad the pockets of the fracking industry.