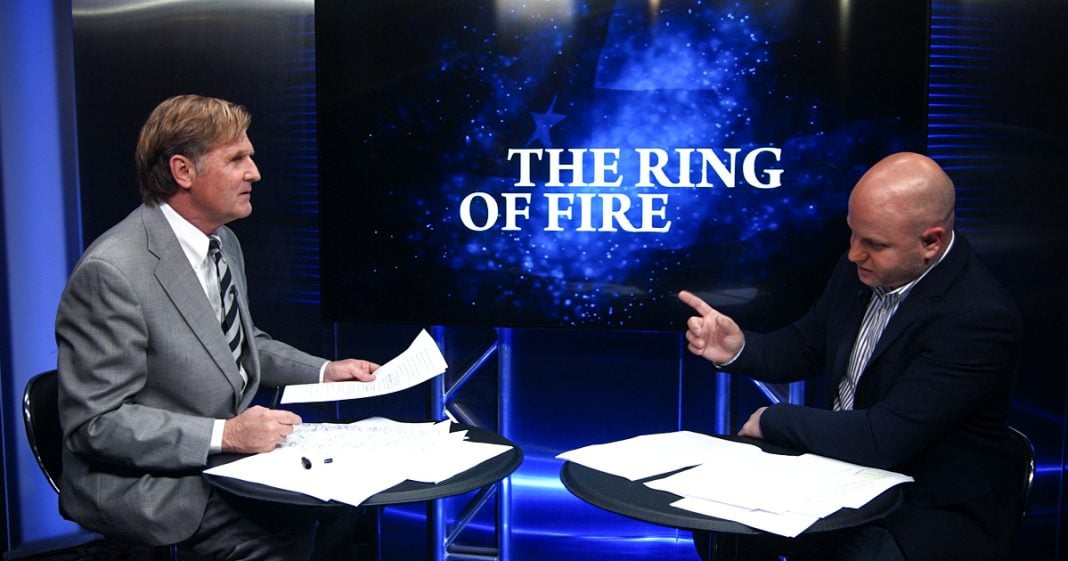 Recently, Suzanne Spaulding, a former under secretary at the Department of Homeland Security, took some time to attack our program America’s Lawyer on RT America, saying that we’re harming the United States by pointing out the flaws in our justice system. Turnabout is fair play, so we did some digging into Spaulding’s past and found out what’s really behind her attacks. Ring of Fire’s Mike Papantonio and Farron Cousins discuss this.

Mike Papantonio: Recently, Suzanne Spaulding, a former under secretary at the Department of Homeland Security, took some time to attack our program, America’s Lawyer on RT America. Saying that we’re harming the United States by pointing out the flaws in our justice system. Turnabout is fair play. So we did some digging into Ms. Spaulding’s past and found out what really wasn’t surprising at all. As a matter of fact, there are stories that both Farron and I have reported over the years time and time again. Farron, this is… I look at this story.

You know, basically this is some vast… they even make the suggestion that Ring of Fire is owned by RT, which it’s not. There’s no ownership issue here this. But as I looked at this story, here’s what I thought about. I thought about the stories that you have written about and stories that you’ve reported about for years. And that is, that what we used to think, well, did you ever see the movie, I think it’s Wag the Dog?

Mike Papantonio: And Wag the Dog was about the arms industry churning up war. Okay. And I started looking at Ms. Suzanne Spaulding. And we started looking about, what’s her background? Why don’t you take it there and I’ll add as we go, okay.

Farron Cousins: Well, as you mentioned previously she did some time as an under secretary at Homeland Security. Her big thing was cyber security. And during that time she, you know, managed this $3 billion budget for this entire organization, but she was also working with CEOs, working with corporations, trying to always tell them the next big threat is right around the corner. And then when she left Homeland Security, that became her full time job. That’s where she makes her money.

Farron Cousins: Is telling corporations, and I’m assuming I’m positive this is someone who still has her security clearance.

Farron Cousins: Right, that’s a big selling point for anybody looking to hire her.

Farron Cousins: So she goes out there and this was what she did during this speech. She says, listen, RT America is trying to undermine the United States by pointing out all of our flaws. She didn’t even dispute that it was accurate. She just said there, they’re talking about all the bad things we do in this country.

Mike Papantonio: And the organization she works for are nothing but war pimps. And the people she’s surrounded herself are nothing but war pimps. When I read, when I, when we actually did research, and this is just by the way we’ve just started with this research and we’ve just started with these stories, but I take a look at who does she speak to?

Do you see anything in here where she gives speeches to environmental organizations? Or advocacy groups for consumers? Or groups that are out there looking out for the interest of taxpayers? No, her speeches to Goldman Sachs, Exxon, Boeing, McDonnell Douglas, DuPont, Dow. She is just one of them. She is nothing more than a puppet for these organizations and she happens to have a clearance, a security clearance. So all of a sudden these organizations that are saying, oh my God, RT is actually talking about us. She gets upset because she’s paid to get upset.

Farron Cousins: Exactly, and this group that she’s with, this is the group she gave the speech for, she’s a fellow here; the Center for Strategic and International Studies. They actually boast about being one of the most influential, in terms of being embedded with the defense contractors, with the Pentagon. They actually get funding.

Mike Papantonio: She’s bragging about it.

Mike Papantonio: She’s paid to do it.

Mike Papantonio: The Aspen group, if you were to put a room full of people that look like a setting out of Dr. Strangelove. Like we will bomb you into nonexistence. It is that group. The
people that are funding her, the people that are paying Suzanne Spaulding’s way, are Lockheed. They’re Northrop. They’re Boeing. This, the list is right here.

Mike Papantonio: They’re General Dynamics. They’re Raytheon. And so again, you have this element that are what I call the HillaryBot holdovers. And the HillaryBot holdovers buy into this because everything that is Russian is bad. And so these folks are the folks that would gladly start conflict with Iran. They would start conflict with China. They would gladly start a new cold war with Russia. They would start a new cold war, a new war anywhere in the world because that’s how they make their money.

Farron Cousins: Except I actually, I have to correct you on this because the one place they’re not going to start a war is Saudi Arabia and the United Arab Emirates

Mike Papantonio: There you go.

Farron Cousins: Because they’re also getting money from them. The groups that Suzanne Spaulding is with is taking money from those countries, so the ones that are the real enemies, not just of the United States, but of humanity in general, while they’re paying them, they’re also buying $20 billion in weapons right now.

Mike Papantonio: Can you imagine going around giving speeches that these, these TV shows, like the one we do, where we talk about bad judges that are just in the pocket of Corporate America. We talk about the dynamics of the war industry wanting to chum up war by fear. By saying, oh my God, you know, if we’re not careful, China is gonna to stomp on us. If we’re not careful, Iran’s going to have another nuclear bomb tomorrow. They are in the business of war and I tell you, if you have any doubt that this actually exists, there really is a, it’s a fictional movie, but it’s called Wag the Dog. Take a look at Wag the Dog and you then understand what these folks are all about. Again, there’s no higher calling here. Suzanne Spaulding is not operating with any kind of higher calling.

She’s operating on; the only calling is, is when the Arab Emirates wants to give her a million dollars for making a tour and talking about, you know, the threat of Iran or whatever it may be. She’s taking the money. When Northrop, or when, I have the list right here, by the way. When Boeing, General Dynamics, Raytheon, DuPont, Exxon, when these companies want her to give a speech, she does it. She doesn’t give a speech for advocacy groups.

You will never find Suzanne Spaulding giving a speech for an environmental activist group because according to Suzanne, they want to undermine the sanctity of the judicial system in America. You’ll never see her giving a speech for a consumer group that says by God, pharmacy costs need to come down because according to Suzanne Spaulding and all of the little, the gremlins, the flying monkeys that she works with, they would determine, oh by God, the Russians are trying to undermine the American justice system. Do you see it any other way?

Farron Cousins: Absolutely not. And she’s also, you know, Chevron, Exxon, Saudi Aramco. Those are other companies that are funding these groups that she works for and that she speaks on behalf of. I mean, this is, this woman is so embedded in both the military industrial complex; with the climate change denying complex. She’s served in both Republican and Democratic administrations. This is everything that is wrong with this country.

Mike Papantonio: She was a key advisor to the CEOs… now listen to this. If you’re watching this show, go look at what the business round table is. The business round table are, they’re nothing more than this gaggle of corporate CEOs who want to take more money from Americans and want to do it however they can get by, whether it’s breaking the law, whether it’s change in law, whether it’s stacking the court system with right wing corporate judges, they’re going to do it. Now, there’s more to this story. Let’s pick it up in another segment.