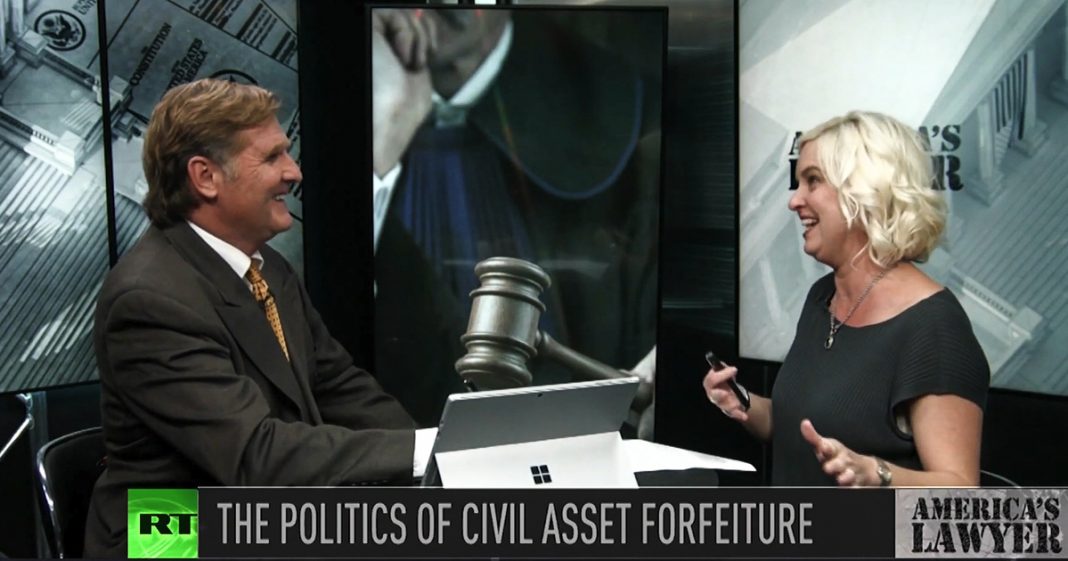 Via America’s Lawyer: Mike Papantonio is joined by Legal Journalist Mollye Barrows to talk about how the Supreme Court could limit the travesty of civil asset forfeiture.

Mike Papantonio: The Supreme Court recently heard oral arguments in a case that may result in some involuntary reforms to state civil asset forfeiture laws, making it more difficult for states to confiscate cars and houses and other property that’s even tangentially used in the commission of a crime. That’s kind of the state of law right now. You commit a crime and buddy, they’re going to grab up everything they can. So, tell me what’s developing with this? What is the Supreme Court thinking about here?

Mollye Barrows: Well, it seems as if they are certainly going to side on the Institute for Justice, which is the organization that’s providing an attorney for this particular individual.

Mollye Barrows: So this case centers around this guy named Tyson Timbs of Indiana. He was busted by undercover cops for selling them $400 worth of heroin. In his punishment, he received a year of house arrest. He also received fines and then they confiscated his $42,000 Land Rover. So the Institute for Justice is basically arguing and did argue successfully before a state court as well as an Indiana State Appeals Court.

That’s because this was his property, that it was a small amount that he was accused of basically selling that it was a disproportionate, grossly disproportionate punishment to his crime. So it fell under the excessive fines ban under the Constitution’s 8th Amendment. So the appeals court upheld it. A judge agreed with them initially and the appeals court upheld it, but the Indiana State Supreme Court said, oh no, we don’t want to do that. Its property. It doesn’t apply. That particular bill of rights section doesn’t apply…

Mollye Barrows: And the justices are saying that.

Mike Papantonio: And there are other states that have said, you know what, we’re not going to do that. We’re not going to; this law, they’ve actually interfered with the performance of certain federal laws even on some of this forfeiture. But I mean this is so basic. It goes back to the Magna Carta, doesn’t it?

Mike Papantonio: What was it, 1225 or something?

Mollye Barrows: Yes. So way back in the day, even back to piracy, they said that some of these laws originated with dealing with pirates confiscating property, but different laws including, you know, going back to England, the Virginia Declaration of Rights, Gorsuch, Neil Gorsuch even mentioned that in particular when they were arguing this case in Supreme Court.

He said this is going back, that there are deep history ties that protect a person against excessive fines and that this clearly falls under excessive fines. And they did argue against this particular solicitor general because he was saying, well, it’s because it’s property, it shouldn’t apply to states that this particular bill of rights, part of it shouldn’t be applied to states when every other part of the bill of rights has been incorporated.

Mike Papantonio: Right. Okay, so there’s one indicator already. I mean, Gorsuch has always been in favor of just a vast amount of power in the hands of government. So now he’s saying maybe we’re overreaching when we use a marijuana bust, of 10 ounces of marijuana to take the car, and the house, and you know, the vacation home. That’s how crazy this has become.

Mike Papantonio: As a matter of fact, it’s so crazy that in some states there doesn’t even have to be an arrest. You understand?

Mike Papantonio: They take this, take this property even before there’s an official arrest and what ends up happening is that person has to fight their way out.

Mollye Barrows: No, you’re exactly right. And there was another one of the justices as well who argue the same thing. Breyer, he apotheosized for this particular Indiana State Solicitor General saying under your argument that because it’s property, it doesn’t apply to the states. What if a driver’s going five miles over the speed limit? They could be in a jalopy or they can be an extremely expensive car under your rationale and argument that can be confiscated. And he was like, well, yeah, you’re right. So anyway, it certainly looks like they’re leaning.

Mollye Barrows: You’re right. Well, and they’re raking in billions of dollars off these forfeitures, so you’re right. It will, they may surprise us.

Mike Papantonio: Thanks for joining me, okay.