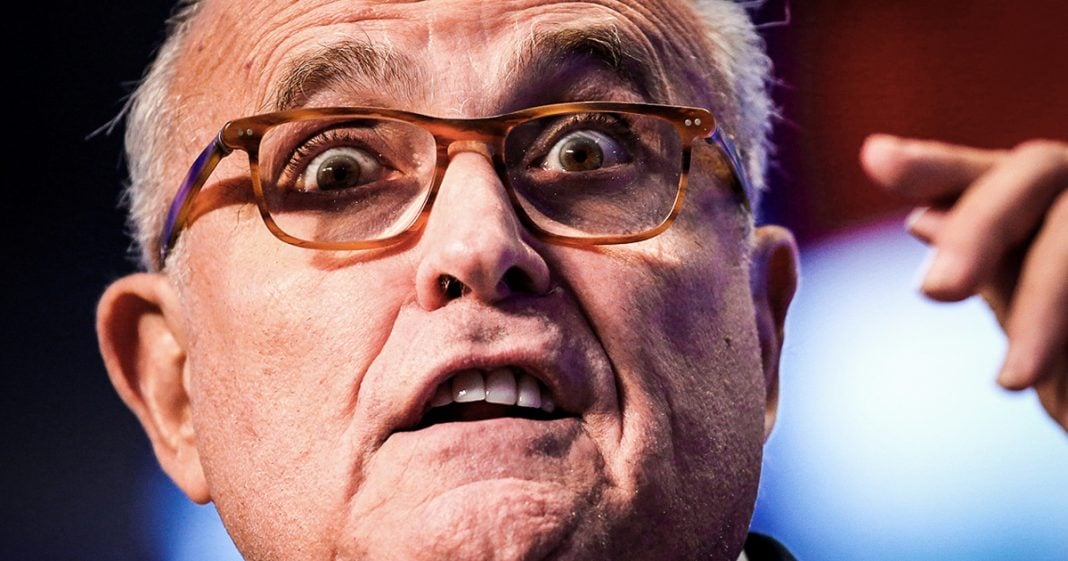 Rudy Giuliani attempted to send out a tweet this week, but because he didn’t put a space at the end of a sentence, he inadvertently ended up creating a hyperlink. Savvy internet sleuths picked up on it and created a domain that took users to a page that says Trump is a traitor. Rather than admitting he made a mistake, Giuliani has accused Twitter of some kind of conspiracy against him. Ring of Fire’s Farron Cousins discusses this.

This week, Rudy Giuliani, when off a little crazier than usual when he accused Twitter, have some kind of conspiracy theory by allegedly according to Giuliani editing one of his tweets to create a hyperlink that lead back to a website that said, “Donald Trump is a traitor to our country.” Now, here’s what actually happened. Rudy Giuliani being the non tech savvy person that he is, was tweeting out something about Robert Mueller was an attack on Robert Mueller, but he also included something about the G20 and that was the end of a sentence. It ended G20 period, but then he didn’t put a space in between that period and the next word and the next word happened to be in I in. So it was G20.in. Well, that’s actually a valid email. Uh, excuse me, web address because “.in” happens to be the url for India. So g dot Ian became an actual clickable website that just hadn’t been purchased yet.

So tech savvy, Twitter user, Jason Valasquez actually saw that bought G20.in very quickly created a small web page that only said Donald J dot trump is a traitor to our country. When Rudy Giuliani found out about that, he accused Twitter, have somehow editing his tweet to create this hyperlink in there. Instead of admitting, oops, I forgot to push the space bar. So rather than admitting that as a human being, he has a fault and he screwed up. He instead launched this crazy conspiracy theory of Twitter being run by hardcore anti-trump editing his tweet to create a hyperlink to lead back to a page. This is, trump is a traitor to our country. Here’s a sample of some of the tweets that crazy Giuliani tweeted out after finding out about this. Twitter allows someone to invade my text with a disgusting anti president message. Uh, don’t tell me they’re not committed card carrying anti-trumpers.

Time magazine also may fit that description. Fairness, please. He tweets in all caps with an exclamation point. Giuliani, uh, was an advisor on cybersecurity for Donald Trump, but he was named in 2017 cybersecurity advisor. And this idiot doesn’t know that he accidentally created a hyperlink. It’s okay, Rudy. It happens. You didn’t put a space there. Anybody who’s ever used a computer in their life has had a typo. It happens. But to try to cover it up by saying there’s a conspiracy theory of card carrying anti-trumpers at Twitter and news week for some reason, um, who, who edited your tweet, just that one there, just picked that particular tweet out of, out of hundreds. They could have been doing it to Donald Trump himself too. But no, no, no, no, no. They singled out your tweet just to make you look like an idiot. Well, the typo didn’t necessarily make you look like an idiot, but this cover up. A conspiracy now launched because of a typo makes you look like an absolute crazy man. But given what we’ve seen from you for the last year, you didn’t necessarily even need the conspiracy theory to tell us that you have gone off the rails. Any credibility you may have had, all that goodwill you garnered after nine slash 11 has absolutely disappeared. And it’s by your own making. The entire country is paying attention to you right now. And all they see is a crazy old man who’s too proud to admit that he forgot to push the space bar.