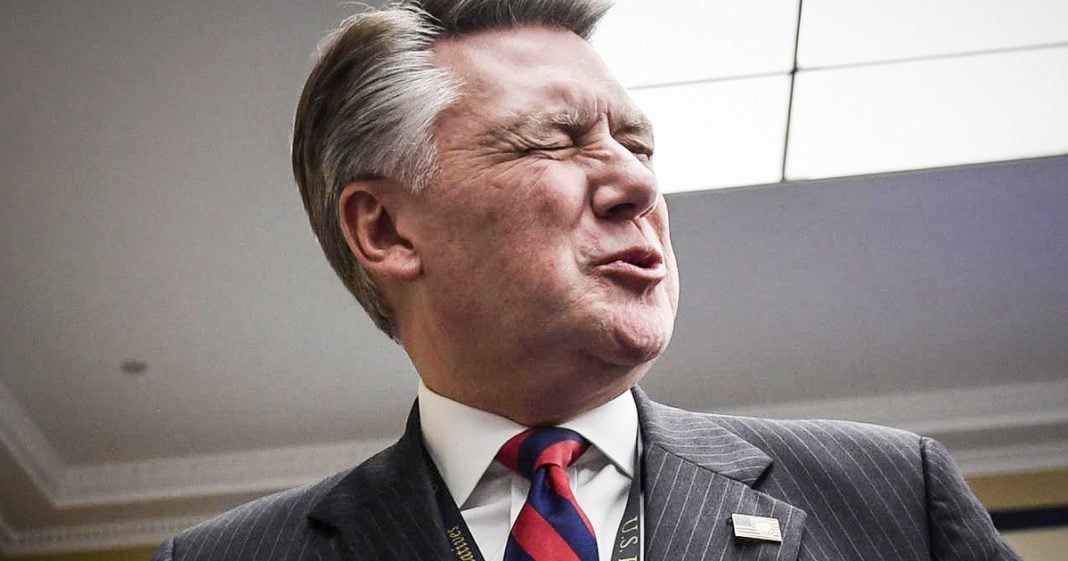 A massive investigation is currently underway in the state of North Carolina where Republican Mark Harris, or at the very least people who worked for Harris’ campaign, have been accused of literally stealing ballots in the 9thdistrict race for House seat. Multiple people have come forward saying they were paid by Republicans to take absentee ballots away from people. Republicans have whined about voter fraud for years, and now that we’re watching it happen in real time, they are completely silent. Ring of Fire’s Farron Cousins discusses this.

For years, Republicans have been telling us that one of the greatest plagues here in the United States is voter fraud. You know, Donald Trump, after the 2018 midterm, said that down here in Florida, you actually had people that would go vote, go to their car, changed their shirt, maybe put on a fake mustache or a hat, and then go vote again. When he came into office after he was sworn in and early 2017, he puts together this taskforce whose job it was to go out there and find all the voter fraud and take care of it and restore faith in our elections. They found absolutely nothing and wasted a few million dollars, but hey, at least they were trying to address the problem. Right? Which makes it even more shocking considering the fact that we have actual real verifiable voter fraud taking place in the state of North Carolina and Republicans have been absolutely silent about what is happening in that state.

Now, in case you’re not familiar with it, here’s what happened. What’s happening in a nutshell? You have ninth district in North Carolina. Their house race has not yet been verified by the board of elections because of the massive amount of voter fraud that took place at the hands of Republicans working for Republican candidate, Mark Harris, who technically as of this moment, has won that race by about 700 votes, but people working for Mark Harris. We’re paid to go around and collect absentee ballots from people and then they destroyed them. Now this has been sworn to in affidavits by some of the people who say that they were the ones paid to go around and do this. This is real voter fraud. It is literally a Republican stealing in election because there illegally stealing people’s ballots that were required to be mailed back in by law. They stole them and destroyed them and the majority of people had their votes stolen and destroyed.

Happened to be African Americans, so it’s likely that this race would have gone the other way and the Democrat would have one instead of the Republican, and that’s why the state board of elections is like, we know there’s massive fraud here. We know you’ve done illegal things. We’re not certifying this Democrats in the US House have refused to seat a Republican Mark Harris here until a full investigation has completed. They’re taking it seriously. Democrats are tweeting about it. They’re talking about it on the news, but Republicans by God, they are absolutely completely silent. Now, to his credit, Lou Dobbs on Fox News talked about it earlier this week, but he talked about how fishy it is that anytime Democrats don’t, when they cry, voter fraud, which forgive me if I’m wrong, but isn’t that what Republicans have been doing, is not white. Donald Trump created that voter fraud task force to make up for the fact that he lost the popular vote, and here we actually have people signing sworn affidavits saying that it happened and you’re going to sit there and act like this is a democratic ploy to steal an election.

You’re frigging party is stealing an election and your not talking about it. They’re not talking about it. The media is not even talking about it enough, let alone what happened in Wisconsin where they just strip the incoming democratic governor and secretary of state of all their power and gave it to the Republican controlled legislature. You know, the Democratic Party has its flaws and I’ve got plenty of issues to deal with with them, but never in my lifetime have they ever done anything as sneaky and underhanded and as disgusting as what Republicans are doing across the country right now because they’re so terrified of losing power. The Democrats have never tried to nullify the power of an incoming governor. The Democrats have never literally stolen ballots from people and destroyed them before they could be counted. Those traits are uniquely Republican and it’s because that is a party that is terrified of becoming irrelevant and terrified of people understanding what they’re actually about and the links that they will go to to retain that power. That’s what’s happening in North Carolina and that’s why Republicans aren’t saying a word about it.