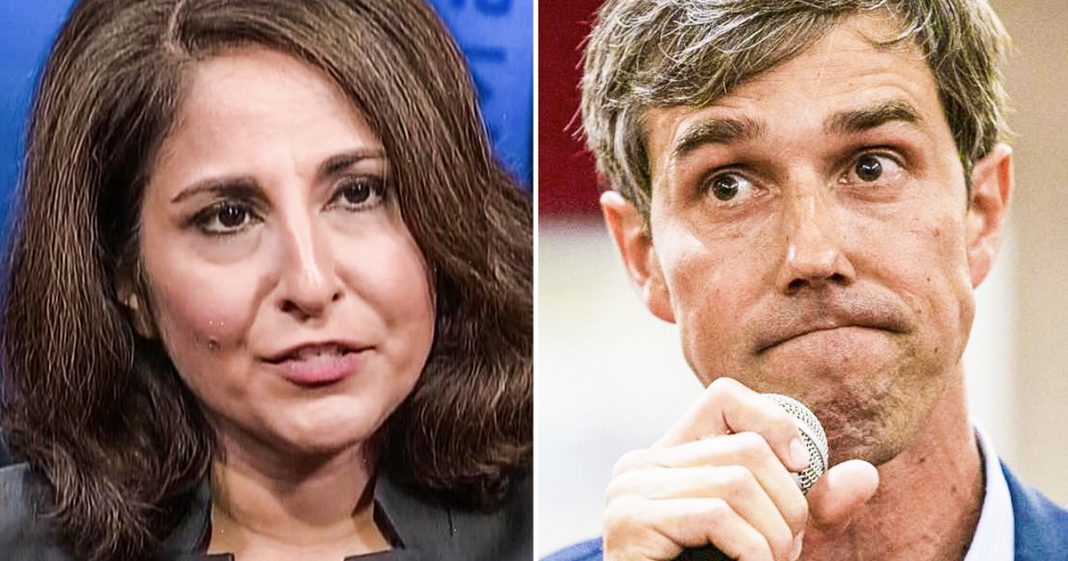 Establishment Democrats have a weird obsession with Beto O’Rourke, and they’ve come out swinging hard after investigative journalist David Sirota exposed donations to Beto’s campaign from fossil fuel employees. Neera Tanden, the president of the Center for American Progress smells a conspiracy by the “Bernie Bros” to take down O’Rourke, but she seems to be the one engaging in a coordinated attack. Ring of Fire’s Farron Cousins discusses this.

So really weird thing has been happening these last few days that doesn’t involve Donald Trump or republicans in any way. It’s actually a weird thing happening on the left and what seems to be happening is that you have establishment Democrats out there lead apparently by Neera Tanden, the president of the Center for American Progress, saying that there is some kind of coordinated attack amongst the so called Bernie Bros against Beto O’Rourke. So all the establishment has come out and they’re defending Beto O’Rourke, talking about how great he could be as a candidate in 2020. Maybe he should run, maybe you shouldn’t. They’re not completely decided. I’m not going to put words in their mouth, but they are defending him tooth and nail against information that has come out from investigative journalists. David Sirota talking about all of the fossil fuel employees who have given Beto work money, a valid criticism, a factual criticism, which is the most important part of it.

But you have these folks on the establishment side saying that Sirota is part of a broad campaign with the people like Elizabeth Brunig from the Washington Post, uh, attacking Beto. Because they’ve coordinated this because they feel like Beto is somehow a threat to Bernie Sanders in Iowa and then bad things will happen to Bernie so these people have this conspiracy to take down. The whole thing is absolutely bonkers and there’s no truth to any of it. I mean, here’s what Neera tanden again, President Center for American progress tweeted out the other day said Brunig, referring to Elizabeth Brunick, who I just mentioned, peace and post on Beto is just the latest attack by a supporter of senator sanders on Beto joining Jelani, Jacobin and Sirota feels a bit orchestrated and clearly they are worried. The only thing we’re worried about, Neera, is you spreading these asinine conspiracy theories to your hill, bought followers on twitter who then take it up and pass it along to other folks.

Listen, this is not meant in any way to be an attack on Beto O’Rourke. This is not. Please don’t take it as such. I like Beto O’Rourke. I have issues with him. I have questions about him. We don’t know enough about him and yeah, I think elevating him as the 2020 candidate right now, immediately after he comes off that loss, they be all be at a close loss to Ted, lose a Ted Cruz. Uh, it was still a loss. It was still a loss. So you may get excited because he energized people all around the country. But was that really excitement for Beto or was that excitement? Because literally everyone hates Ted Cruz. You don’t know that and you’re already ready to elevate him to 20, 20 status. Give it a break, give it a rest. But more importantly, doesn’t it seem odd to everybody out there that we have so many people rushing to Beto’s defense and just trying to shove him down our throats as the presumptive nominee?

Can we just let the play out? Can we stop with this? Like, Oh, you attack better, but what about Bernie? What about Bernie? For the love of God? I got issues with Bernie to. I’m not ready to put any of my weight behind any candidate and I don’t even have any weight except around my gut right now. But I’m not going to jump in and say, I want this person over this person, or I want this one over this one. I want to see who’s actually gonna run for president, and then we’ll go from there. Maybe we’ll have some good ones. Maybe we won’t, but if you think that any of us are just going to go easy on the Dem nominee because they’re a democrat, if you think that if they have a dirty pass, we’re not going to work to expose it. You’re wrong.

That’s not how this works Neera. It’s not how this works. Other establishment type folks, we’re not supposed to be cheerleaders so you can get mad at people like David Sirota all you want, but that doesn’t make what they’re saying untrue. They’re reporting the facts as the media is supposed to do and if it hurts your candidate, well that sucks for you. Right? Maybe you should have picked somebody that didn’t have that kind of a past, and I’m not even saying Beto work does. I’m just saying stop getting mad at journalists. Stop repeating trump’s lies about them. How about you just accept the fact that nobody is perfect and they all have skeletons in their closet that has to be dealt with? Yes. Even people like Bernie Sanders and those are bridges we have to cross when we get there, but right now we’re still looking at a huge field of possible contenders, many of whom wouldn’t even make it past the first debate as we saw back in 2015 with the Democrats. So why don’t we hold off on trying to shove any one candidate down people’s throats until we at least know who is officially going to run for president. Can we all agree on that for just a few minutes here?