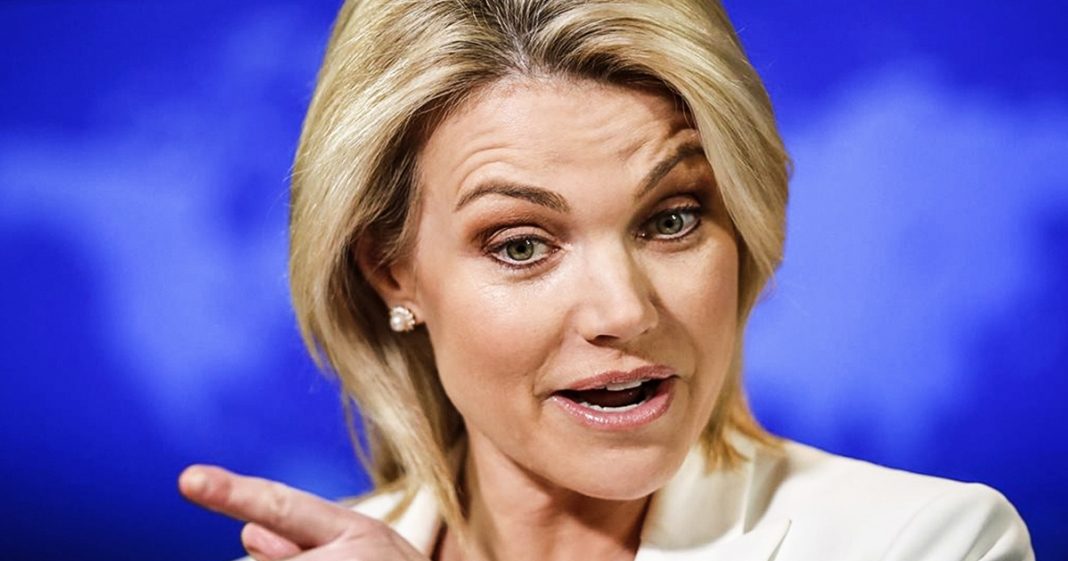 Donald Trump is expected to name former Fox News on-air personality Heather Nauert as his new Ambassador to the United Nations, replacing former ambassador Nikki Haley. Nauert would be the third former Fox News employee to join this administration, showing that the lines between the White House and Fox News have become completely nonexistent. Ring of Fire’s Farron Cousins discusses this.

Donald Trump has finally made his pick to replace Nikki Haley as the US ambassador to the United Nations and to virtually no one’s surprised that person is going to be Heather Nauert who is currently a State Department, a spokeswoman, and who before that was actually a Fox News host, so aside from being the spokesperson for the State Department for a year and a half or so, her entire career experience is working at Fox News, occasionally hosting on Fox and friends, spreading misinformation, disinformation, doing the bidding of corporations and foreign governments who the United States wants to keep being friendly with in spite of the fact that they keep killing their own people and all their neighbors. Saudi Arabia, I’m looking directly at you there. Here’s the thing again, this is a heather now are former Fox News host. Now makes up the third former Fox News employee who is now employed within the Trump administration. Now all of the talk about Nauert having experience, not knowing what in the hell she’s doing and really having no business at all, being in the United Nations, all of that is going to be thoroughly discussed during her confirmation hearing, so there’s not much need to talk about that right here.

In fact, when somebody has no experience, there’s really not much to talk about. Just like Donald Trump, she’s going to go there and bungle things as pretty much everyone is going to imagine, but because Republicans hold the Senate, she’s also likely going to be approved. What I want to talk about is the fact that the lines between the White House and Fox News, they’re not just blurred anymore. We’ve completely erased those from existence. Fox News is an extension of the White House and unfortunately the reciprocal of that is true to the White House is now an extension of Fox News. The thing we have all been worried about happening for 15 years has finally happened. Fox News is getting their own people in the White House. Fox News is getting their people appointed to positions of power in the United States. Fox News, while once seen as a last stop before retirement for old conservative talking heads, you can’t keep it in their pants, is now a springboard to a cushy government appointment that should never have happened.

It shouldn’t have happened with the first one, but now we’re already on our third and we’re not even finished with the second full year of Donald Trump’s presidency. On top of those three former Foxers in the White House. We also have the fact that Donald Trump regularly talks on the phone to Lou Dobbs, gets his opinion on policy matters during meetings. He talks on the phone to Sean Hannity Giving Sean Hannity ideas on what to say about the president on his show the next day and Hannity telling the president what he showed her should not tweet and how we should phrase it, and he should do with policy. Again, there are no lines anymore between the White House and Fox News. The two have become one and the same and that is horrifying for the future of this country. When you look at Fox News, when you see any of those hosts saying anything about anything, can you pinpoint any one of them that you would want to see in charge of policy decisions here in the United States? Any one of them that you would trust to be in charge of policy decisions? I know the folks who actually regularly watch Fox News and believe what those hosts say would say, hell yeah, absolutely, but those of us capable of independent thinking and critical thinking, we know better. We know that if any of those idiots gets in a position of power within this White House, that is going to be a disaster. Not just for the country, but possibly for the entire planet.