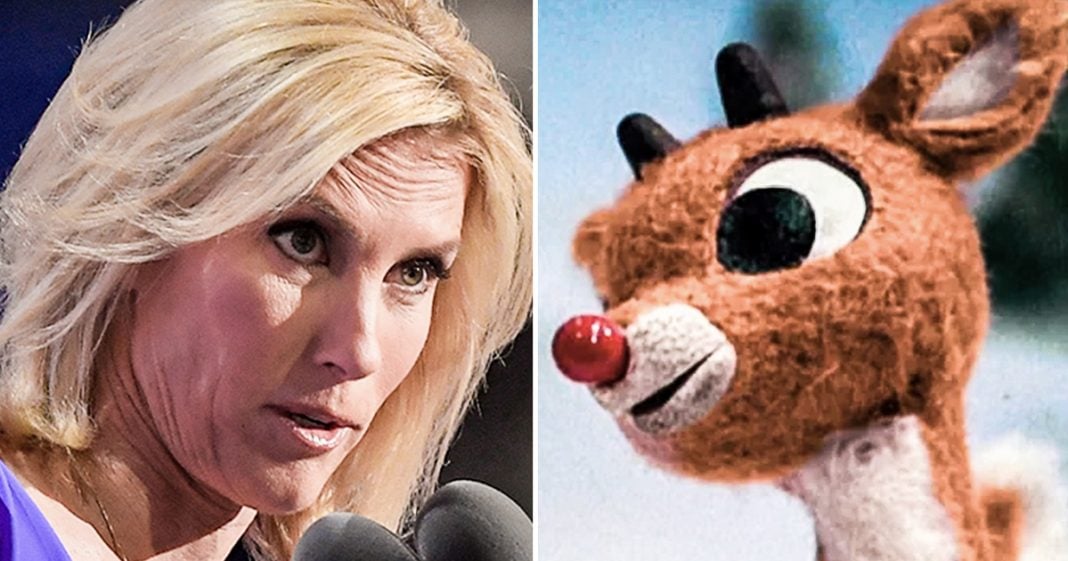 On her radio show this week, Fox News host Laura Ingraham whined about liberals being so-called “killjoys” because they never let anyone have any fun. During her rant, she claimed that “the left” probably likes child pornography more than they like Rudolph The Red-Nosed Reindeer, whatever that means. This woman has gone off her rocker as Ring of Fire’s Farron Cousins explains.

According to Fox News Host Laura Ingraham, the folks on the left are nothing but killjoys killjoys she says, and that, uh, we probably enjoy child pornography more than we actually enjoy Rudolph the red nose reindeer. Not exactly sure what that means, but that is exactly what Laura Ingraham said on her radio show this week. Here’s a clip of Laura Ingraham attempting to say what the left does and does not like.

They want to intimidate you, so you’re going to turn it around in a few years and you’re not going to be, you’re going to have to hide your Rudolph the red nose Reindeer DVD and hide it. And I say this, you can’t, you can’t keep that around the house. So no, that might as well be child pornography. They’re actually probably like child pornography better than they like Rudolph the red nose reindeer at this point. I didn’t really have a problem with pornography at all.

All right. Let’s, let’s try to figure something out real quick. I’m not sure where the child pornography came from or pornography in general. That must have just been something that was already on Laura’s brain because man, she spat that out like it was right there on the tip of her tongue ready to go. Somebody might be spending a little too much time thinking about child pornography and it’s not the folks on the left. Furthermore, if you want to try to talk about pornography or any kind of sexual misconduct, uh, you’re really out of your league here. Laura, see the people who pay your paychecks, the ones who signed that they have also actually right now, they’re currently being sued by their shareholders for covering up the massive amounts of money they have paid over the years to shut people up about the sexual harassment taking place at your network.

And if you want to go the pedophile route, well hell, you guys, the Republicans also have pretty much a monopoly on that as well. You look back at any of the scandals the last 15 years involving a politician attempting to have under a sex with an underage individual, you’re going to find almost all of them are Republicans. In fact, many years ago when we were still doing the radio show on a weekly basis, it’s still out there, but back when I was the researcher for it, we had a massive file and that file was simply called Republican perverts and I still have it saved on the computer and I would be more than happy to send that to you so that you could brush up on all of the Republican sex offenders out there in America and ask for Rudolph the red nose reindeer. Where does that even fit in to anything who’s out there attacking Rudolph?

Who is mad at the red nosed reindeer? I mean, I actually, I luckily I just watched this movie again last night with my children and it was fine. I, I didn’t have to say like, wow, everything is horrible. Whenever watching this again, go burn all the Rudolph. You can find kids. No. We sat there and enjoyed a nice little Christmas movie as millions upon millions of people in this country do at this time of year. Nobody’s trying to kill anything. If anything, your folks, your Republicans, your followers are actually the real killjoys here because you’re the ones who are trying to take the fun out of football by making it to where all were so mad that people are kneeling during the national anthem and that the Pentagon is actually paying the NFL to put on these pseudo patriotic displays. So we’re going to boycott the NFL. Yeah. Who’s the real snowflake here, Laura? Who are the real killjoys? Because if you actually took a minute to put down your talking points, take off your reality obscuring glasses and look around you. You’re going to find that the Republicans in this country are a hell of a lot more sensitive than any of the liberals out there.