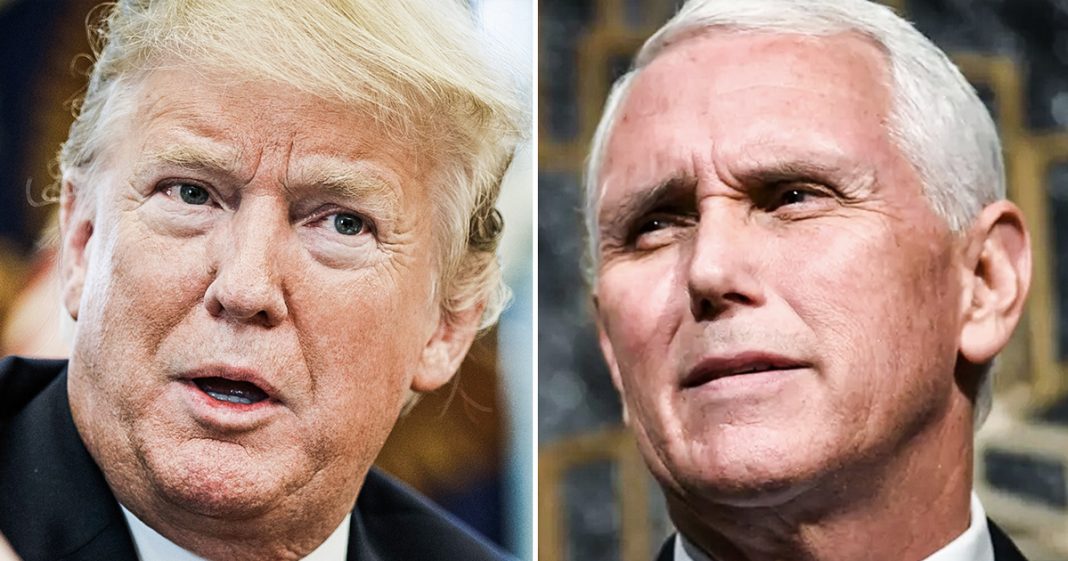 Rumors are swirling that Donald Trump is going to dump Mike Pence as his running mate for 2020, but is there any truth to these claims? In the past, the media has always speculated that the sitting President is going to dump his VP, and so this is likely just a continuation of those claims. Trump has a lot to lose if he dumps Pence, as Ring of Fire’s Farron Cousins explains.

This week there’ve been reports kind of swirling around that maybe Donald Trump is thinking about replacing Mike Pence on the 2020 Trump for president. Keep America great ticket. Now, here’s the thing, pretty much every midterm midterm, excuse me, every second term election we’ve seen in modern times with presidents, there’s all these rumors that, oh, Obama’s gonna Replace Biden in 26th or 2012. Oh, Bush is gonna. Replace Cheney in 2004. Hook Clinton’s going to replace Gore in ’96. There have been reports on every single one of those things potentially happening in the second election of a sitting president in recent memory and zero of them have ever come true, and that’s why I don’t like this speculation that’s going around right now that Trump is going to replace Mike Pence. And look, I personally, I hate Mike Pence. I hate everything he stands for. I hate everything he says. I hate everything he does.

He is a horrible human being as as Donald Trump, but Pence, and this is where a lot of people get uncomfortable when I say this pencil is super beatable. Pence, if something happens to Trump and he gets impeached or removed from officer resigned, Pence becomes president. Scary thought, right? It is. Until you look at the 20, 20 field, there is literally probably a handful of Democrats in this country who could lose to Mike Pence. All of the rest of them would kick his ass in a general election. Mike Pence is possibly one of the most beatable Republicans to ever exist. So no, I don’t want Donald Trump to replace Mike Pence and I think we could suffer through a year and a half of Pence being president, uh, if it meant an easy defeat in 2020, because let me tell you, Donald Trump is going to be hard to beat in 2020. He really is.

We know that whatever comes out of the molar final report, his hardcore base is not going to believe it at all. The people who already think that collusion is exists are going to believe that it exists. Regardless of those findings. Everybody knows Trump’s a horrible person. Even a lot of the people who still support them, in spite of it, some support them because of it, so you’re not going to win on that. You’ve got to have somebody that you can put up that’s going to talk issues, that knows issues and that can get results. Democrats seem to have a problem finding somebody that’s capable of doing that or willing to embrace the few people on their side who actually do do that, so that’s why I say leave Pence in there and stop with this stupid speculation every other day. We’ve got rumors about somebody who’s going to leave the Trump administration here.

Somebody is going to be quit quitting. Somebody’s going to be fired. Somebody is going to resign. Somebodies going to switch positions. Who Cares? Honestly, who cares? And if you think that Mike Pence is bad, just imagine how horrible any of his replacements could be. Could you imagine a Donald Trump, Sean Hannity, 2020 tickets? I hate to say it, but I feel like that would be unbeatable. Really. Sean Hannity, as horrible as he is to those of us on the left, is embraced as a hero on the right. Not saying he would pick Sean Hannity, but I wouldn’t put it out of the realm of possibility either. So let’s stop with this speculation. Let’s stop with the “Oh, Pence doesn’t bring anything to the ticket” talk because the one thing print pins brings to that ticket is beat ability. In the event something happens to Donald Trump.