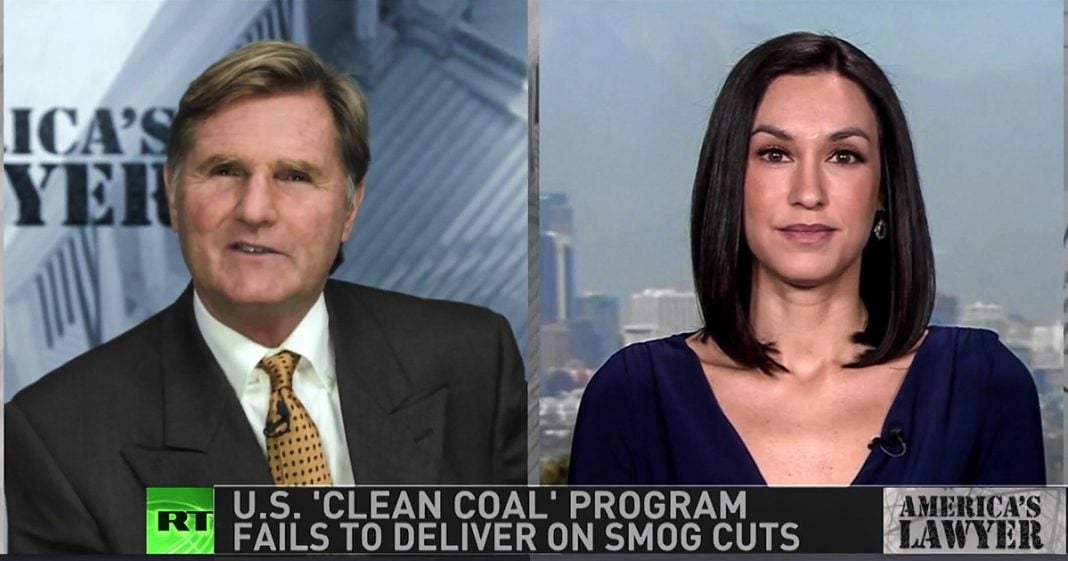 Mike Papantonio: American taxpayers have spent billions of dollars subsidizing chemically treated refined coal. But a recent analysis of EPA data shows that the power plants are actually pumping out more smog, not less. It’s a clear sign that the clean coal program is failing to deliver. Here to tell us more about that is Brigida Santos. Brigida, how much money has the federal government given clean coal plants to reduce harmful emissions?

Brigida Santos: Well, the federal government has given billions of dollars in tax subsidies to companies that are supposed to make coal more environmentally friendly by refining it with chemicals. But after using clean coal technologies, most of the companies that have received lucrative government subsidies have failed to reduce their nitrogen oxide emissions by 20 percent, which is required by the policy. And to give you some numbers of how bad the problem is, in 2017, 39 percent of the plants that were burning so called clean coal emitted more NOx than they did in 2009 while burning raw, dirty coal.

Mike Papantonio: You know, we see this type of thing play itself out again and again Brigida. I mean, and what the interesting thing to me about it is that on the look back, okay, the company says we’re going to do this, we have a way to do this, and on the look back when we find out it was all a lie and they took all that money, taxpayer money and it was based on faulty science or faulty progressions. When we do the look back, we don’t do anything about it. The government doesn’t say, hey, pay us back all that money. Why isn’t the program working as it’s intended? I mean, why are the emissions going up rather than down?

Brigida Santos: There’s a lot of debate about this reason. Now, one coal fired plant that saw its emissions increased 298 percent since it started refining coal, says that its emissions are actually higher partially because it had bought tradable pollution credits through the US cap and trade system, but the company did not provide any evidence to support its claims and environmental engineers say that refined coal has little to no impact on actually reducing NOx emissions at power plants because of changing electricity demands and changing boiler temperatures at these facilities, which makes smog reductions ineffective.

Mike Papantonio: We’re really looking at, this is; what this is, this is subsidies just like a farmer would receive subsidies for growing a particular crop. We’re trying to keep them in business. The government says we’ll do that. We don’t have to hide behind these lies. And I remember very specifically clean coal is the way to go and here’s why. I remember seeing a chart that talked about if we use, it compared clean coal to dirty coal, really there’s no difference except clean coal is actually dirtier than dirty coal.

And so, but I remember seeing these and just like everybody else. I thought, wow, this is a great idea and it’s something taxpayers should spend money on, but now we know that it’s not. So why are companies collecting tax credits if they’re not performing properly? We see it. I mean there’s no, there’s no guesswork here. They said we’re going to do A, and it ends up being Z. Why are we still subsidizing these companies?

Brigida Santos: The IRS allows power plant investors, mainly major banking institutions like Goldman Sachs to show that they’ve reduced emissions by getting lab tests conducted just a few times per year, but these tests are not actually an accurate measure of real world conditions because of that. Plus there is a revolving door. Goldman Sachs, for example, received $63,000,000 in tax credits last year after it helped one operator build a refined coal plant.

Now that company then sold Goldman raw coal at cost and then bought it back for a discount after it was chemically treated. This not only saved the company millions of dollars and allowed it to profit, but it also allowed Goldman Sachs to get rich on these government subsidies. Even though that very coal plant, the New Madrid plant in Missouri saw its nitrogen oxide emissions increase more than any other American coal plant that was burning refined coal.

Mike Papantonio: I’ll tell you where you do see the prosecutions. You see prosecutions where an individual commits, let’s say IRS fraud or some kind of fraud where they represent a particular idea and then the government says, no, not only is it not true, but you actually committed fraud here. My bet is, since we’re talking about Goldman Sachs, we know the history of Goldman Sachs. We know that, you know, history follows a person and under the law Goldman Sachs is a person.

So if you go back and you look at the history of that person, you look at just tally up the number of times that Goldman Sachs has had to pay fines for fraud. Just clear absolute fraud where they’re stealing from investors. They’re stealing from the American public. Go back and tally up the billions of dollars that where we’ve trusted Goldman Sachs. How about 2008 where they were part of the part of the program to burn down the entire economy.

Brigida Santos: There’s also a revolving door between politics and then these big banks and maybe that’s why we’re not seeing prosecutions come down because people leave their government positions and often do you go work for the banks and so maybe they don’t want to prosecute their friends and their former acquaintances.

Mike Papantonio: Thank you Brigida for joining us.