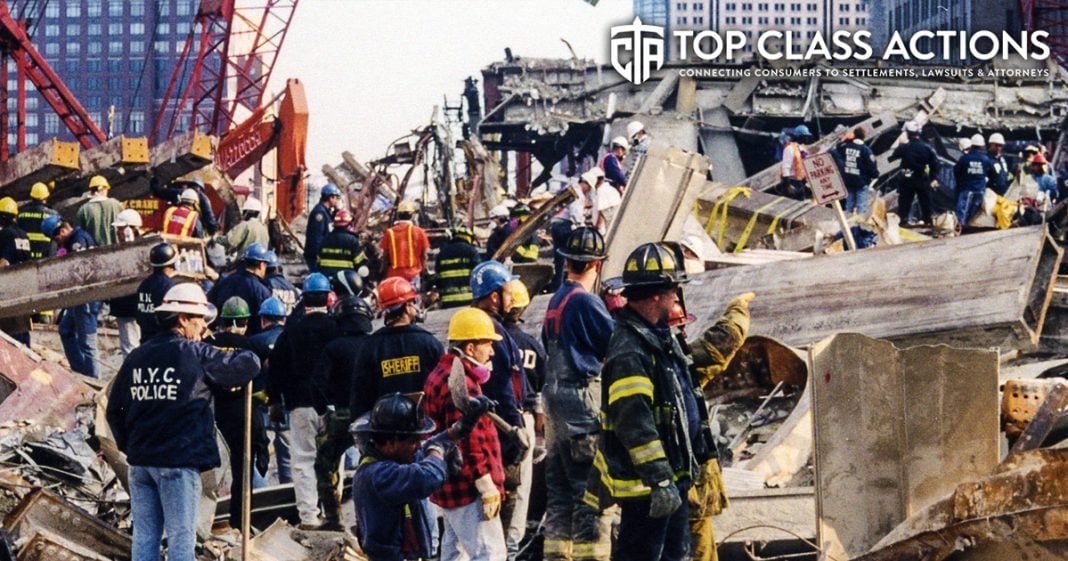 The heroes of the 9/11 attacks on the United States are developing deadly diseases as a result of the toxins that they were exposed to during the cleanup process. There is a fund set up to help cover the financial costs of these workers, but not all of the people developing these devastating illnesses are aware that help is available. Ring of Fire’s Farron Cousins discusses this with Scott Hardy from Top Class Actions.

Farron Cousins: The number of people who had developed cancer and other respiratory illnesses following the attacks of 9/11, is almost at 10,000. These include people who lived in the area, first responders and other people who were in the general vicinity when the twin towers came down. Luckily there is a fund that has been set up to help compensate the people who’ve developed these illnesses, these 9/11 related illnesses. And I have Scott Hardy from Top Class Actions with me now to explain how that works. Scott, this is actually something, you know, we have so many first responders.

In fact, we recently had another several of them, I think three or four, pass away from illnesses that they got as a result of their exposure to the debris from 9/11. And a lot of people who may have just even been working in the area, visiting the area when the attacks took place, they have developed illnesses and diseases as well. They may not understand that they are also entitled to what is available in this compensation fund. So tell us a little about this fund and how this works.

Scott Hardy: Sure. Thanks Farron. The compensation for this is interesting, because it compensates any victims who were in the area for almost a year after the terrorist attack. Because you had a lot of people that on the day of the attack you had volunteers, law enforcement, first responders that were there and then after the attack of course, you for months and months, you had cleanup efforts.

But you also had people who lived nearby. You had people that were visiting. You had people that were working in the effort to actually clean up the site of that horrific terrorist act and now we’re finding years and years after the event that people are developing cancer. And the cancers are widespread and varied. Everything from skin cancer to bone cancer, to blood cancers to bladder or prostate, organ, other types of cancers, lymphomas that could be directly connected to all of the hazardous waste that happened as a byproduct of that terrorist incident in the horrible attack on 9/11.

And so you’ve got thousands and thousands of people out there every year. Now that are actually developing these cancers and that may not know as you mentioned, that they can actually put a claim forward to get part of this seven plus billion dollars that’s been set aside for victims of 9/11. And so it’s, it’s interesting when you’re going through this, and even though 9/11 was so many years ago, as we all know, cancer is a very slow acting illness and as we are aging and as these first responders are aging and other people that just happen to live nearby and suffer the consequences of that horrible day, we’re seeing more and more people affected by 9/11 related cancers and illnesses.

Farron Cousins: And they had initially closed this compensation fund. I believe in about 2004. But then several years later is when, I guess they had the realization that, oh, sometimes it takes, you know, 10 years, sometimes it takes 20 years for these specific illnesses to emerge. And people have to understand, you know, there’s a lot of what can be toxic components that go into construction. Especially when it explodes, when it catches fire. There was plenty of asbestos that was put into the air in that immediate area as a result of those towers falling down.

So we’re also dealing with, in addition to the cancers you mentioned, future cases of Mesothelioma. You know, these are horrifying illnesses for which many of them there is no cure at all and people may not even know at this point that they have that developing in their body. So what should people who may have been exposed to any of this, what do they need to do now to make sure that they are protected themselves?

Scott Hardy: Well, if you have cancer, if you were in the area, if you were actually in New York during that timeframe and you’re in the area of the World Trade Center, you want to make sure that your, you know, you’re getting your checkups. That if you get a diagnosis of cancer, that you submit your claim through the fund and you can do that through topclassactions.com. You can find the lawyers that we work with. It’s actually a simplified process because you know, you’re not filing a lawsuit, you’re not filing a class action.

All you’re doing is saying, I’m sick, I need help and here’s my information. The lawyers will work with you to get your doctor’s records, submit the information to the fund and get you paid and get your family paid because you have a lot of young people that are in their 40’s and 50’s now, which should be otherwise very healthy, but all of a sudden they’re getting these surprise diagnosis of cancer. And you know, you’ve got families.

There was a family that was, had both a mother and a father that died and left these kids who were just infants and very young when the terrorist event happened and now they’re teenagers or just starting college and they’ve lost both parents and it’s, it’s horrible. But thankfully, you know, this fund was created so that the families who are impacted by it and you know, any family member that’s sick with almost any cancer, whether it’s an organ cancer, bone cancer, you definitely want to speak with an attorney, go onto top class actions.com.

Submit your for the 9/11 related illnesses and see if you qualify. Because as you mentioned, there’s more than $7,000,000,000 in this fund. It’s an easy process to go through. You submit your information, you submit your paperwork, showing that you know you’re actually sick or your family member is sick and you’ll be able to get paid in a relatively short timeframe once that’s verified. So it’s highly recommended.

Don’t miss out because this fund will not be open forever. I know that there are talks of closing it within a few years and hopefully that won’t happen. Hopefully they’ll make sure that they extend it, because a lot of people who aren’t sick right now could very well get sick within the next number of years.

Farron Cousins: Absolutely, and if anybody needs any more information on this, there is a link to Top Class Actions in the description of this video. It will give you the information you need and direct you where you need to go. Scott Hardy, thank you very much for telling us this story today.