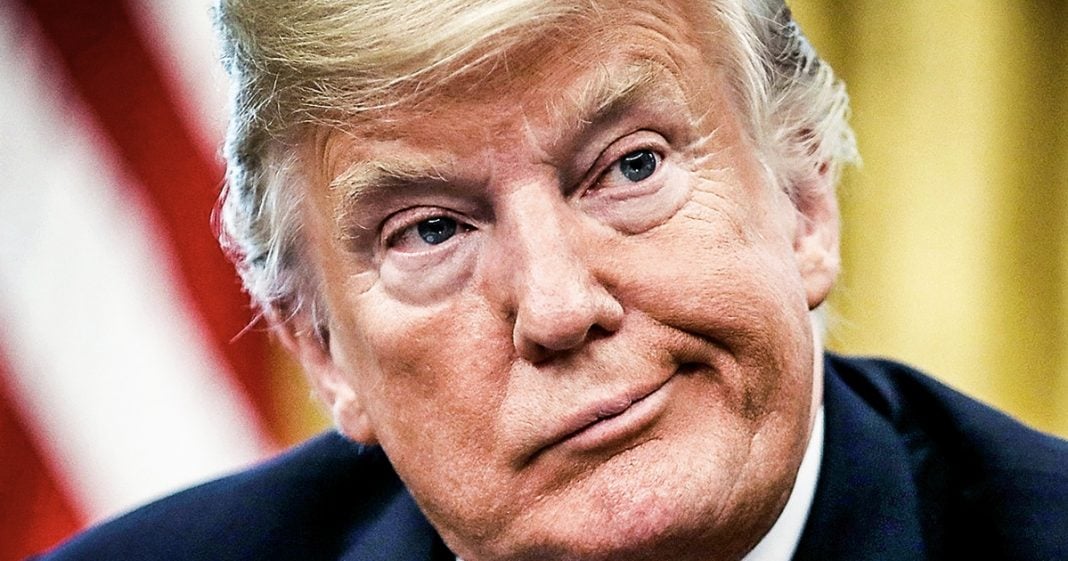 According to officials inside the White House, Donald Trump isn’t concerned one bit about the massive debt crisis that he and his Republican allies have created. They’ve said that the reason he doesn’t even address it is because he knows he won’t be here when it blows up. This is the kind of corporate mentality that cripples big businesses, and now Trump has brought it to the White House. Ring of Fire’s Farron Cousins discusses this.

The current national debt sits at about 21 point $6,000,000,000,000. Now, if this had happened two years ago, Republicans would be up in arms right now about the fact that the debt has been skyrocketing for the last two years, but because they have absolute power in Washington DC, at least at this very moment, they don’t seem to really care about deficits anymore. You see, Republicans only care about deficits when Democrats are sitting in the White House. They run on deficits. They make that the central piece of their campaign. In fact, Donald Trump did exactly that, running in 2016 and now that he’s president, he suddenly doesn’t care about the sky rocketing deficit. In fact, according to new reports, he’s actually told aides and other officials in the White House that I don’t care. I’m not going to be here when it all blows up. That’s Donald Trump’s thinking about how horrible the deficit is.

What does it matter? Not going to be my problem. That’s for future generations to figure out and deal with. I’ll be long gone by then because after all projections do show that by the time of the end of Donald Trump’s alleged second term, uh, the debt is going to be out of control and it’s going to cause massive spending cuts, economic collapses, a, it’s got to be basically economic armageddon to an extent. Is it something we can pull ourselves out of? Absolutely. We’ve done it plenty of times in the past. We just have to have a responsible president and a responsible congress to understand what needs to be cut and unfortunately we have Republicans in Congress right now who want to cut all the wrong things rather than cutting the massive tax cuts that they gave to corporations and billionaires. They want to cut programs for the needy in the United States, food stamps, Medicaid, social security, everything that helps keep people from going into abject poverty is what they want to cut, but not the tax cuts for the wealthy, but that’s a story for later on.

The thing is Donald Trump’s mentality right here is exactly how ceos in the United States operate today. Screw things up as much as you can. You get what you personally can out of it and then you leave before the problem blows up and the companies face because at that point you have no more liability. You don’t have to pay the costs. You know if you’re running a corporation and you poison 20,000 people and give them cancer or if you’re running an oil company and you have a massive oil spill because you cut safety spending with your company, but now you’re long gone and the oils everywhere or the pollutions everywhere or the faulty product you approved is out there on the market killing consumers everyday. It doesn’t affect you. You got your golden parachute and you got your $600, million dollar severance and you’re out the door and Trump brought that same corporate mentality to the White House and that’s why all these republicans who for years, so it looks ruling the government local business.

Have you ever seen how a business is run in the United States these days? Yeah. Not exactly what we need at the federal level, but unfortunately that’s what you gave us. You gave us a guy who’s trying to make as much profit off of the office of the presidency as he can get as much clout, get as many supporters. Then he’s out the door when everything blows up in our faces and we’re the ones who have to pay the price. We’re the ones that have to clean up his mess, just like we did with George W. Bush. It’s not going to be easy. It’s not going to be pretty, but it will be doable. Meanwhile, Donald Trump and all the republicans will help put us in this position. We’ll get away. No consequences. No. You know, having to atone for their actions. They can retire, go do whatever the hell they want with their millions of dollars. While the rest of us continue to suffer with the mess that they created.