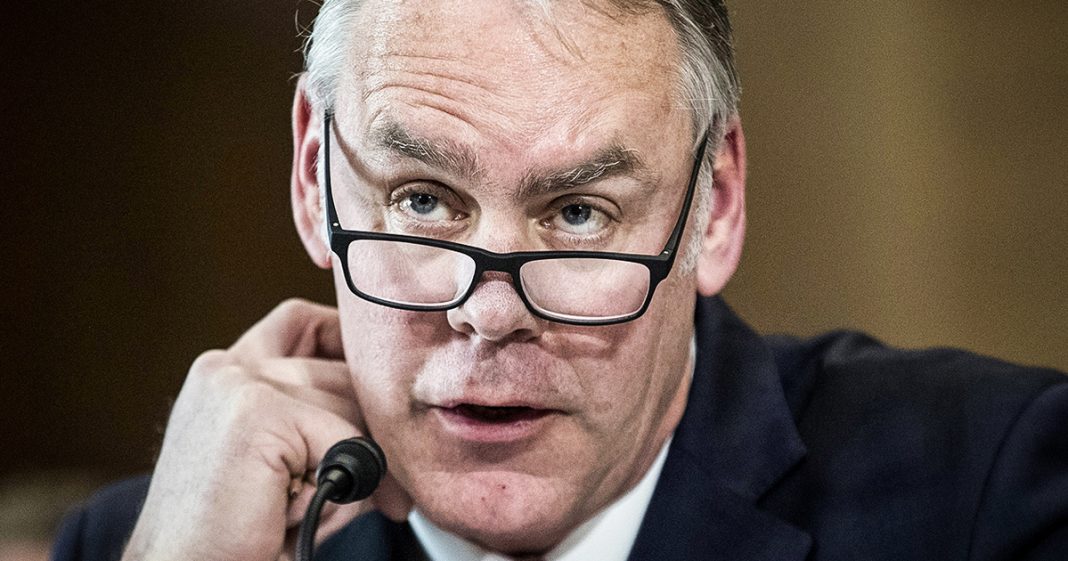 The Trump administration is trying once again to capitalize off of tragedy, and they are actually using the devastating wildfires in California as a political tool to repeal regulations and sell off more protected lands to logging companies. This effort is being spearheaded by Ryan Zinke, head of the Department of the Interior, and he’s got all of his facts wrong in this case. Ring of Fire’s Farron Cousins discusses this.

The trump administration has decided that they’re not going to let a good tragedy go to waste, so they’re using the recent deadly fires in the state of California as an excuse to sell off more lands to logging companies. Now, this is something we’ve spoken about in the past and it’s still actually developing. It’s being run by Ryan Zinke, the secretary of the interior. Uh, this is something Zinke is actually wanted to do since before even these fires started since he came into office, he’s wanted to start selling off public lands, which he has done a to mining companies, to logging companies to water bottling companies. Anybody willing to pay a price? Ryan Zinke has got some land somewhere to sell you, and now they’ve set their sights on California because they’re arguing erroneously falsely that if we just logged out these forest then numb out a little bit.

There wouldn’t be any fires. Sounds simple enough, right? You take away some of the fuel and the fire can’t burn as fast, except for the fact that none of that is true. In fact, the exact opposite is actually what happens in the city of Paradise, the area that is no longer on the map because it burned to ashes. They had actually sold off a lot of land around it to logging companies. Those forest had been thinned out and what happens when you thin out the forest, you take out the big trees, but you leave all the underbrush. You leave bushes and shrubs and weeds that when you get hit with massive droughts, dry out, those things burn a hell of a lot faster than a giant tree does, and that actually allowed this most recent fire, the campfire, wildfire to spread faster and further. Not because there was no logging, but because there was logging and if Ryan Zinke was actually serious about protecting California’s a wilderness and people from wildfires, then he would just do his actual job.

Instead of trying to auction off every public land available. He would go to California, send crews out there because he has the budget for it and it’s part of his job description to clear out the undergrowth, clear out the dead trees on the forest floor. Doing that would help stop some of these firefighters. It’s not going to prevent them because we have corporations out there, PG&E and Edison, who’s faulty equipment actually continuously sparks these fires and then of course we have the overall cause of it all, which is climate change. Now, if we’re not going to address those actual problems, if we’re not going to get out there and clean the forest like we’re supposed to, like Ryan Zinke is department is supposed to do. If we’re not going to hold the energy companies liable for sparking the fire and if we’re going to continue to ignore climate change, then there is nothing we can do in the state of California or anywhere in this country that is going to prevent wildfires. Ryan Zinke and the trump administration, or taking the wrong approach to this because they don’t understand a single word of science. The only thing they understand is the dollar sign and right now they’re looking at those fire ravaged areas of California. They don’t see the 88 dead bodies. They see a hell of a lot of dollar signs.