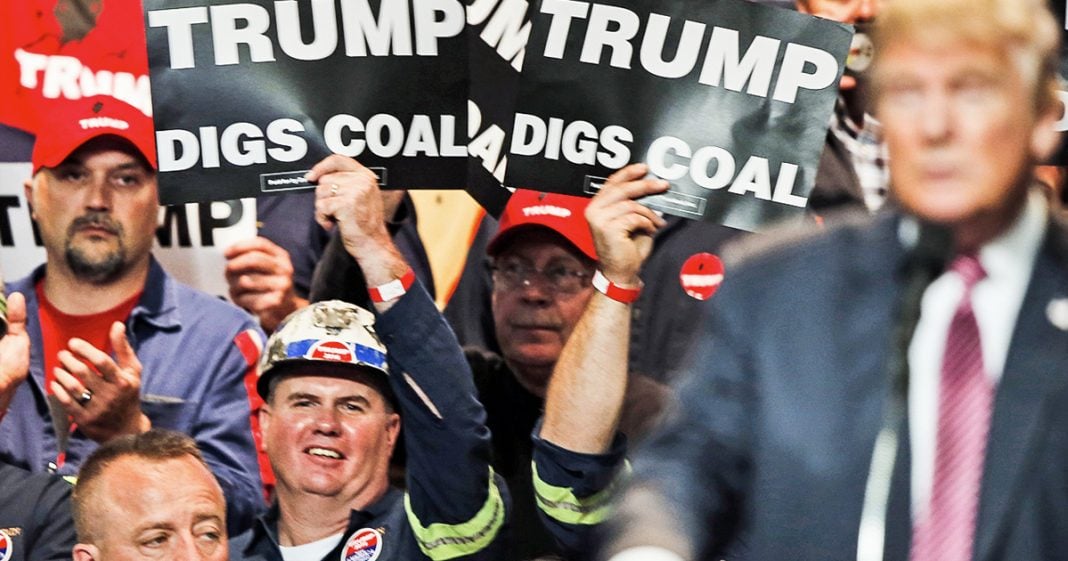 It hasn’t even been two weeks since the release of the EPA’s climate change assessment, and already the Trump administration is trying to role back environmental protections. Their latest target is a rule that reduced the amount of airborne pollution that new coal-fired power plants could emit, and they aim to increase the pollution by 33%. With people like this running the country, we are almost certainly doomed to live out the worst case scenarios in that climate report, as Ring of Fire’s Farron Cousins explains.

It’s been less than a week since we got that massive EPA climate assessment warning us how bad things are going to get in this country if we do not address the problem of climate change. Administration officials, including Donald Trump himself has already dismissed the report. They don’t care about it. They don’t believe it. They think it’s a partisan hack job from leftover Obama people, and so they’re just going to completely ignore it and pretend it doesn’t exist. And then this week, again, less than a week later, they’re actually coming up with a new rule that is going to allow more carbon pollution from new coal fired power plants here in the United States. They’re repealing yet another Obama rule that would have helped reduce the amount of carbon that we’re spewing into the atmosphere. Under the previous rule, the Obama rule, uh, any new coal fired power plant had to have these, a carbon capture devices.

This carbon capture technology installed and they weren’t allowed to emit more than 1400 pounds of carbon pollution per megawatt hour of electricity generated. The Trump administration wants to bump that up by about 33 percent with our new rule, and they’re going to allow up to 1900 pounds of carbon pollution per megawatt hour of electricity produced. There’s one bright spot in all this and it is that coal demand in the United States has fallen by 40 percent, 40 percent because it’s outdated, it’s dirty, and it’s less efficient, so even though they’re repealing this rule and putting their new let’s pollute more rule in place, there actually are no new coal fired power plants that this rule could apply to at least as it stands right now. Now perhaps repealing this rule might encourage coal companies to go out there and build new plants and whatever, but considering the staggering drop in demand, that seems unlikely, so this may actually be one of those cases where the Trump administration comes in, repeals and Obama rule allows for more pollution, but that pollution may not actually materialize because they’re, once again, essentially betting on a dead horse because that’s what coal is at this point.

Coal is a dying fossil fuel method that has been used for hundreds of years that has fallen out of favor around the planet, not just because of how gross and dirty it is for the atmosphere, but because of how inefficient it is become compared to newer, better technologies. Now, not all of those newer technologies are better. They’re not all cleaner. Some are just as dirty as cool fracked. Natural gas over its lifetime will admit just as much as coal will, but at least in this instance, because of that drop in demand because things are changing around the planet and nobody wants coal anymore. Maybe this is one rule that will actually have no impact on the United States because maybe we’re not dumb enough to keep building new coal fired power plants and we understand that it’s time to move on from the same fuel method that our ancestors used to use.