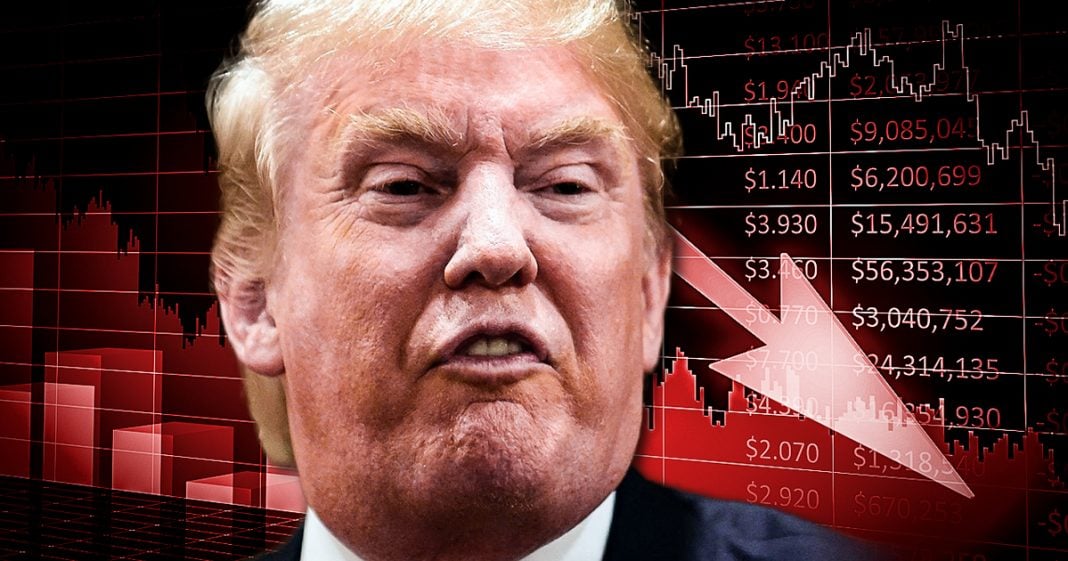 Donald Trump claimed that he had made wonderful progress with China during their talks at the G20 summit, and then he immediately tweeted out a series of nonsensical rants that caused the Dow to tank, leading to one of the worst days for the stock market in years. Aside from declaring himself “Tariff Man,” the president also tried to strong arm the country of China via Twitter, and it didn’t end well for anyone. Ring of Fire’s Farron Cousins discusses this.

Over the weekend, Donald Trump was at the G20 summit down in Argentina where he met with the leader of China and the two allegedly worked out some kind of deal to where they were going to end the trade wars, uh, Donald Trump allegedly had put kind of a stop on some of the tariffs that he had put in place and China was allegedly going to stop some of the terrorists they had put in place and immediately start buying some products from the United States again. And everything was well for about a day. And then idiot Donald Trump got on twitter and made things so much worse. Well, I can’t say that it was only Donald Trump who made things worse because before that even happened, and I think it was actually in response to this, you had members of the Trump administration, Larry Kudlow, his economic advisor, and then Steve Mnuchin at the Fed who had to walk back some of Donald Trump’s claims about what actually happened in that meeting.

Because as it turns out, much like his deal with North Korea, nothing concrete was ever discussed. Nothing was ever put on paper. No agreements were ever signed, it was just a couple of guys chitchatting coming up with ideas that may or may not end up going into place to begin with. So at that news, when those two administration officials had to walk back, Trump’s bold claims, the dowels started tanking, and then as I pointed out, Trump got on twitter, made it so much worse by declaring himself tariff, man, I am a tariff man. Donald Trump said, and he went onto more rant about why tariffs are good and tariffs are great, and that only sent the Dow spiraling down even further. Eight hundred points were lost yesterday, a single day on the Dow because of Donald Trump and his disastrous policies. You see, here’s something that a lot of people don’t understand about trading in the stock market and all that.

Um, I know a lot of people who are financial planners, they’ve been traders. They understand how it works and they’ve told me that they have to pay very close attention, not just a policy, but to what presidents and high ranking politicians say because those words, whether or not there’s any policy behind them at all, those words themselves affect the market either positively. If the president saying a good thing or negatively, if the president says something that sends investors running away and that is what Donald Trump did yesterday and it’s what he’s done tons of times throughout his entire presidency. That’s why we’ve seen the stock market with these wild highs and wild lows because the man is so schizophrenia himself that he doesn’t know where he’s going to be on any given day, causing the market to become a bit schizophrenia as well and long as this madman is out there on twitter, creating problems in real life and then allegedly solving them.

Although he didn’t really solve anything, it’s going to make the market go down. Again. Our economy at this point is very fragile, more fragile than Trump or anyone in his administration or anyone in the Republican party is willing to admit. The slightest provocation is going to send the entire economy back down the tubes, something like trade wars, something like income inequality, something like rising debt and stagnating wages. All of the things that are literally happening in this country right now and what’s going to happen, mark, my words on this is that next year when shit starts falling downhill and the economy goes down, Trump is 100 percent going to say that it is all because of the Democrats taking over the House of Representatives. Even though every available economist, whether they’re on the left or the right, will tell you that it’s because of the disastrous policies put in place by Trump himself and his republican followers who held office for the first two years of his presidency.