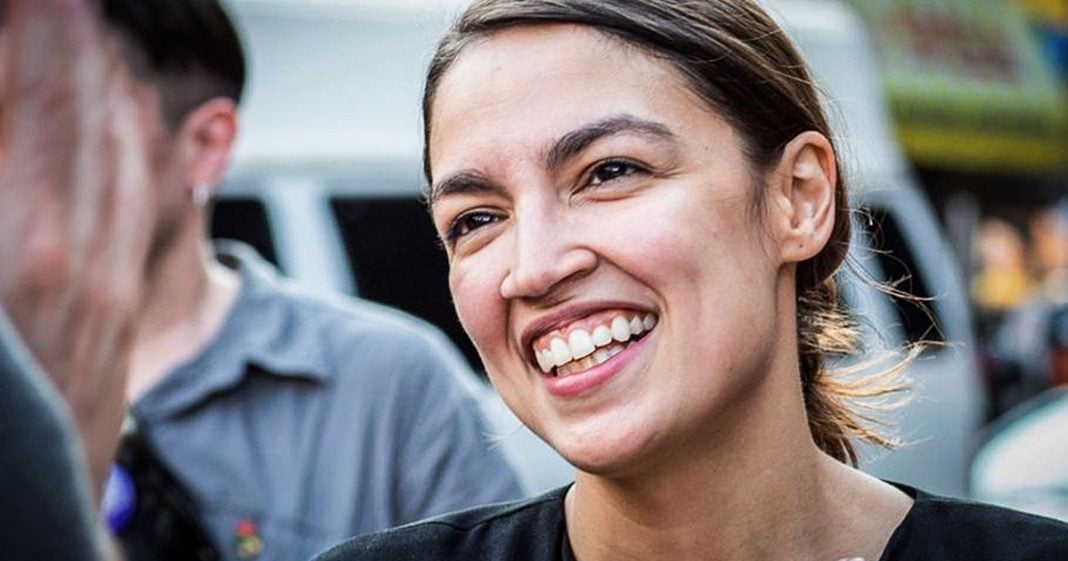 According to her Chief of Staff, Representative-elect Alexandria Ocasio-Cortez is going to be paying her Congressional interns “at least” $15 per hour, making her one of only a handful of members of Congress who actually pay their interns. At every turn, Ocasio-Cortez has changed the game for the better, and she hasn’t even been sworn into office yet. Ring of Fire’s Farron Cousins discusses this.

Once again, representative elect Alexandria Ocasio-Cortez is upsetting norms and changing the way that things work in Washington D.C. and this time she did it by announcing that all the interns that she is going to hire for her staff are going to be paid at least $15 an hour. Here’s why that is so significant. First and foremost, only about three point six percent of Democrats in the House of Representatives pay their interns anything. Eight percent of Republicans pay their interns in the house, in the Senate. Thirty one percent of Democrats pay 50. One percent of Republicans pay, so barely half of Republicans in the Senate. And then beyond that 31 percent. And then over in the house, you got eight percent of Republicans, three point six for the Democrats. Those are horrible numbers, um, because as, as it’s been pointed out, you can’t find that apartment in D.C. for under a thousand dollars a month.

So to ask these young people to come in and not be paid, think that, oh, this experience for you is enough. No, it’s not enough. They can’t afford housing. They can’t afford food. They can’t afford anything, but don’t worry. You’re getting valuable life experience working for some kind of scumbag representative who doesn’t think you’re worth it to pay. Ocasio-Cortez pointed out the fact on twitter that every representative, at least in the house has given a one point, $2,000,000 operating budget and it’s from that pool of money that you pay your staff, you use it for travel, you use it for office equipment, phones and what have you, but everybody gets that same one point $2,000,000 and it’s up to them on how to spend it now. Ocasio-Cortez could have said, I’m going to use that money, you know, to pay somebody really well, not pay.

My interns do use it because I’m going to travel a lot, but instead she did what she has been saying we have to do as a country. She said, I’m going to forego any luxuries I might get out of this and I’m going to put my money where my mouth is by putting my money where the staff is. I’m going to pay them $15 an hour so that they have a living wage so that they’re not struggling to get by paycheck to paycheck living in an expensive area like Washington D.C.. Now, that’s not to say that $15 an hour is going to solve all the problems of these people, but $15 an hour, which they say at the very least it’s $15 an hour. Could even be more than that is still better than almost anyone sitting on capital hill and the reason this happened, not the reason, but one of the reasons this came about and is actually gaining some publicity from it is because democratic, a leader in the Senate, Chuck Schumer, the minority leader, posted a job opening a couple days ago for an unpaid internship.

Come work with Chuck Schumer and learn how to roll over when Republican show their teeth and we’re not going to pay you a damn thing to do it. Schumer took a lot of heat for that to the point where a spokesperson for his office had to come out later and say, no, no, no, it’s not unpaid. They get a stipend in January, so don’t worry about that yet. Stipend doesn’t cover anything, is not going to cover the rent, it’s not going to cover their food. It might cover a month or two, but then what are you going to do for the other 10 months of the year? Ocasio-Cortez is addressing that and hopefully like so many other things that she has already gone to D.C. and done before being sworn in. Hopefully other representatives and other senators on the other side pay attention to this and follow her lead.

And what’s really interesting is that the number of times I’m having to say that I hope other people follow her lead keeps increasing because so far, Alexandria Ocasio-Cortez has done everything correct. She is upheld every promise she made and she is following through in every possible way that she can. And that’s why you see these organizations. Fox News goes after her all the time. These right wing trolls or trying to attack her everyday on twitter, she claps back even louder than them and it’s phenomenal to watch because not only is she a fighter and she’s won all these fights that they have tried to pick with her, but she is also honest and she is doing everything that she promised she would do. And the side effect of that is she’s making other Democrats do the same thing following in her footsteps.