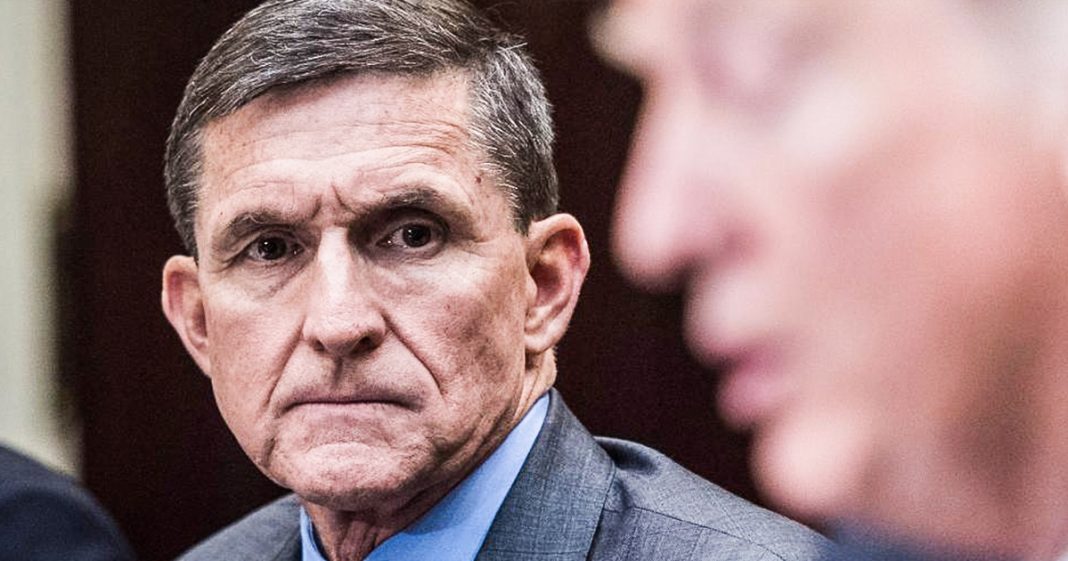 Court filings this week show that former Trump national security advisor Michael Flynn has been VERY cooperative with special prosecutor Robert Mueller, so cooperative that the special counsel is recommending no prison time at all for Flynn. In a series of heavily redacted filings, the public learned that Flynn has met with Mueller 19 times and is helping him with multiple investigations. Ring of Fire’s Farron Cousins explains what this means.

On Tuesday evening, these sentencing memo from Robert Mueller, the Special Prosecutor regarding Michael Flynn, Donald Trump’s former national security advisor for his campaign and his transition team was submitted to the court and it was also made public and in a heavily redacted memo, Mueller and his team requested no jail time whatsoever for Michael Flynn, who had previously pleaded guilty to knowingly and willfully making incorrect statements, false statements to investigators, and here’s why. Mueller does not want Michael Flynn to have to go to prison because Flynn has been a very cooperative witness. Mueller has spoken to him according to these filings more than, excuse me, right at 19 times. Nineteen times Flynn has sat down with Robert Mueller, and based on what we know from these memos told him everything that he wanted to know. The filings also mentioned that Flynn has actually helped out in more than one investigation, a three separate investigation, specifically that Michael Flynn has been advising on, including one criminal investigation that these special prosecutor’s office is handling as well as the potential Russian collusion investigation.

Here’s why all of this matters. There’s two big things. First and foremost, the reason this should terrify Trump first and foremost is because obviously Michael Flynn is handed over every single thing that he knows. He has been very cooperative. Mueller and his team have been able to verify what he is told them, which is another important piece of the puzzle and therefore because he’s given them everything because he’s been honest, because he is very cooperative, they do not believe that he should go to jail. Now, that’s the second part because it’s not just from Michael Flynn. It’s not just saying, all right, well, this guy helped us out. Let’s let them off the hook. Right now. We’ve got several other potential witnesses in this investigation who were refusing to testify, refusing to cooperate. Some who are kind of on the fence about whether or not they’re going to Mueller just sent a huge gift to all of those people saying, look what could happen.

Yeah, this guy even pleaded guilty to crimes that would result in him going to jail, but because he was such a good little witness, he’s not going to spend a day behind bars if I have anything to do with it. That’s important. That is signaling to all of these witnesses that guess what? You don’t have to take your chance and hope that Donald Trump’s going to pardon you. I might be able to do that myself by recommending zero days in jail for you, so why not take a chance and come sit down and have an honest, truthful talk with me and we’ll see where that goes. That’s what should terrify Donald Trump even more than those heavily redacted pages that indicate that flint is given Mueller, everything that Mueller could possibly want, and it also in on a little bit of hope here. It also gives these people hope out there who are hoping that this investigation could take down Trump or really just shake things up for the man to the point where he resides.

It shows that Mueller is. I’ve said 100 times. No, so much more than we do right. I mean, we didn’t know most of this. We didn’t know there were multiple different investigations including criminal investigations. I mean, to an extent we did, but we didn’t know it this deep, so that’s why this is important. This is only a small part of what Mueller and his team have. So trust the process. Be a little patient, even though it’s hard because with people like Flynn flipping with Cohen now coming in and flipping as well, things are starting to look really, really bad for Donald Trump.