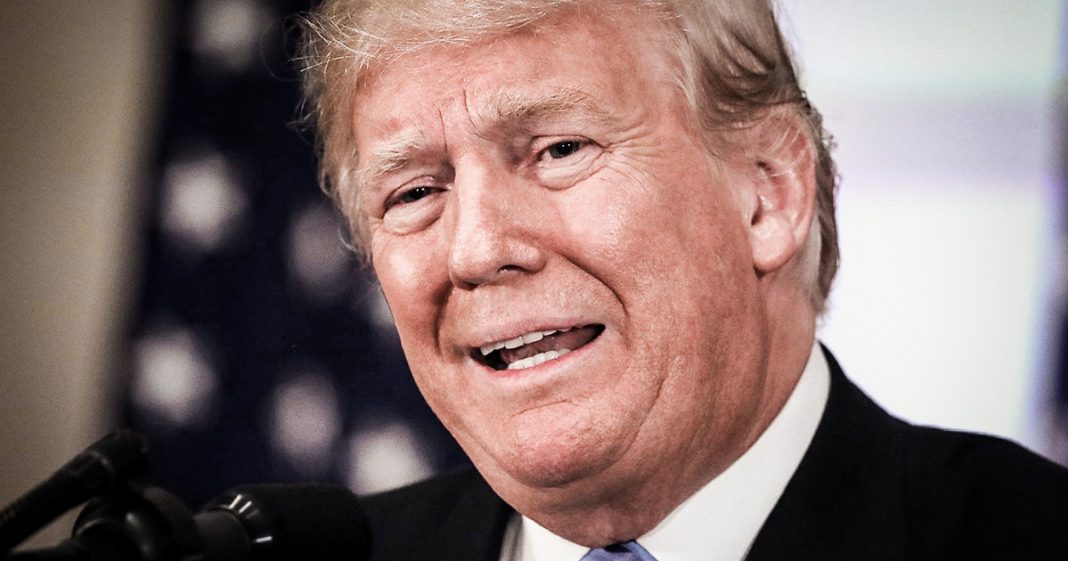 On Monday, Donald Trump tweeted out a note of thanks to Roger Stone for not flipping on the President and testifying against him. But in his thanks to Stone, he also may have committed a felony by both obstructing justice and tampering with a witness. The President is no longer trying to hide his criminal activity, and he’s going to tweet himself right out of office as Ring of Fire’s Farron Cousins explains.

You know, for somebody who loves to Brag about how intelligent they are, Donald Trump sure does the dumbest things on twitter. On Monday, Donald Trump tweeted out what is very obviously obstruction of justice and possibly witness tampering as well. Here is what Donald Trump tweeted out. He said, I will never testify against Trump. This statement was recently made by Roger Stone, essentially stating that he will not be forced by a rogue and out of control prosecutor to make up lies and stories about president Trump. Nice to know. Some people still have guts now. I had to do the finger air quotes there because he put president Trump and guts in quotes. Not sure why, but yes, the folks on twitter had a field day with that, but anyway, as George Conway husband of Kellyanne pointed out, this is a very clear violation of 18 us code 15, oh, three to 15, 12, which states it is illegal to make corrupt or forceful attempts to influence, intimidate or impede any grant or petite jurior or officer in any, in or have any court of the United States or officer who may be serving.

At an examination or other proceeding before any United States, magistrate judge or other committing magistrate in the discharge of his duty, Trump did exactly that with the tweet he was letting people know he was letting other witnesses know that if you do not testify against him, he is going to praise you and if something bad happens to you as we’ve seen through tweets in the past, Trump may flow to pardon around for you made dangle that in front of your face as a good reason for you to not go and testify against him. His obstruction of justice is so blatant and so obvious and at this point so public that it would be shocking if Robert Mueller does not at least come back and a final report with multiple counts of obstruction against the president of the United States. Now, here’s the problem with that, Republicans are not going to vote to convict in the Senate on obstruction of justice.

You gotta have more than that, so hopefully the obstruction of justice is just the icing on the cake, as it very well should be. Because why would you pray somebody for not testifying against you if they had nothing to testify against you about, and that’s what Republicans seem to be missing here. You know everybody’s out there praising Roger Stone from the right because he’s not going to testify against him. Shouldn’t you be concerned that he knows something that would be of value in testimony against the president. That’s concerning you, idiots. Trump sitting there praising him for not doing that is pretty much more evidence that he has something worthwhile to say, but Republicans don’t ever look past. They don’t ever peel back the surface and see what something actually means. President Trump sure as hell doesn’t, and he sure as hell didn’t take the time to think. You know what? Maybe if I tweet this out, not only is it going to possibly land me in prison, but it’s going to also imply that Roger Stone knows a lot that he couldn’t be telling, but because he’s so gutsy and courageous, he’s not going to spill the beans. This doesn’t end well for the president of the United States, and hopefully at the end of all this, this moron is going to tweet himself right out of office.