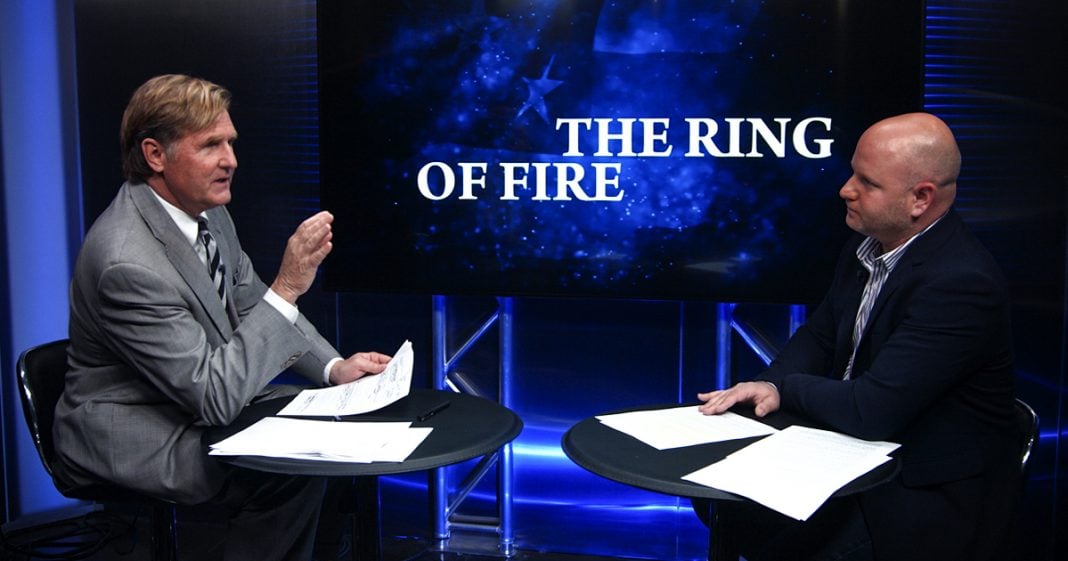 A group of police officers in St. Louis are being held accountable for their recent assault against a protestor. Unfortunately, that protestor turned out to be another member of the police force, not a citizen exercising their right to freedom of speech. Ring of Fire’s Mike Papantonio and Farron Cousins discuss this.

Mike Papantonio: A group of police officers in St. Louis are being held accountable for the recent assault against a protester. Unfortunately, that protester turned out to be another member of the police force, not a citizen exercising their right to free speech. This is an interesting story. Undercover police officer gets caught up in being brutalized because he’s in a group of protesters.

Farron Cousins: You know, I want to have sympathy for the officer that got the hell beaten out of him. But at the same time I don’t, because when you look at why the protests were happening in the first place. So let’s go to the beginning of all of this that the story didn’t mention here is this was a protest from the 2011 shooting of Anthony Lamar Smith. A black man shot by police officer, wasn’t armed. Was complying, did everything, right, officers still killed him.

When the officer was acquitted, that’s when these protests erupted. So the police force says, okay, you know what, let’s get some of these people too. We’re going to send you in undercover. And this was an older gentlemen. Not like a rookie on the force who would fit in with the protesters. So they sent him there and then suddenly the actual police show up to break up protests. This undercover officer didn’t want to blow his cover, so he complied with everything the officers told him to do. They still…

Mike Papantonio: Actually laid down on the ground.

Farron: Yeah, and while he’s on the ground they said, well, that’s perfect. They started beating him.

Mike Papantonio: Kicking him and beating him.

Farron: With their batons. They kicked him, they broke his cell phone, so there would be no evidence. Video, evidence, photo evidence, nothing. Um, well.

Mike Papantonio: And then the rest of the story is they lied. Here’s these police officers, four of them, couple of them lied to the, on grand jury. And grand jury investigation saying, whoa, wait a second, man. This doesn’t sound like this is appropriate police conduct. Now had the guy, the police officer on the ground, who by the way was undercover. You understand why he was undercover. He’s undercover because he wants to figure out, who are all these people in this protest group? So he’s undercover. He gets pulled into it. Had he not been pulled into it, nobody would have even talked about this. I mean it was just a, just another dirt bag protester, you know, gets beat up in their way they see the world.

Farron Cousins: Exactly, and it would have been the word of the officers versus the word of the protester. But that’s one of the things I actually like about this story is that now they see. You know, all these cops who’ve been out there for years defending like, well no, this protest or they throw a rock at them, they threw a bottle at him and so it was justified.

Mike Papantonio: They spit at him.

Farron Cousins: They understand now, no. And it’s indiscriminate what they do. And all of the officers, there were four involved in this beating. The oldest was 35, the youngest was 25. So these are relatively young folks. These are not, you know, older gentleman. These are young want to be Rambo type cops who came in, and under ordinary circumstances 100 percent would have gotten away with it. No accountability. But…

Mike Papantonio: First of all, a lot of it, you know, we’ve talked about this bad police officer thing in the past. Bad training, bad recruiting.

Mike Papantonio: You know, as you take a look at the studies, a lot of these police officers, you know, they’re people who sat on the bench on a football team for high school. Got a junior college degree and all of a sudden they’re Rambo. And they’re Clint Eastwood, you know, they want to show up on the police force. And there’s something about that.

The first thing to do is shave their head and grow a goatee. You know, it’s that whole Bruce Willis kinda look. But that for some reason has become the posture, it’s become the norm in recruiting police officers. And there’s some great police officers out there. I don’t say this, you know, I don’t want to paint with a big brush. But when you see a story like this and you really then micromanage the story and say, well, okay, where’d they come from? What’s their background? How much training did they have? It’s always a disappointment.