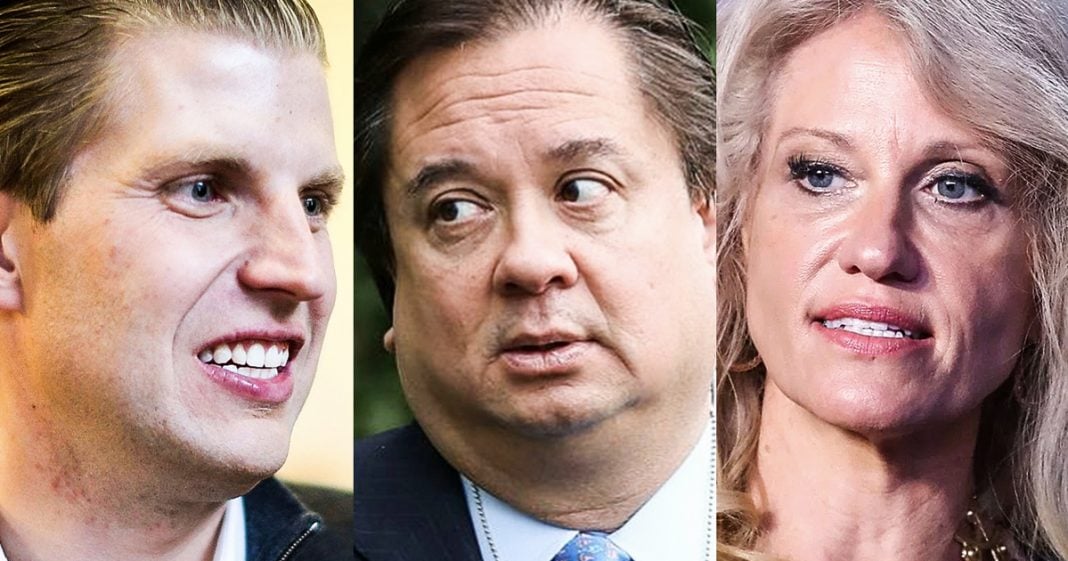 Eric Trump wants to remind the country that he is, in fact, the dumbest son of Trump, and he did a spectacular job of that Monday evening with a tone deaf tweet about the marriage of George and Kellyanne Conway. Eric said that George’s anti-Trump tweets undermine all of Kellyanne’s accomplishments, and Twitter immediately hit back at Eric for his comments. Ring of Fire’s Farron Cousins discusses this.

Eric Trump is apparently out there trying to prove that not only can he be just as dumb as his father on twitter, but he is also the dumbest of the Trump children. On Monday evening, Eric Trump tweeted out the following: “Of all the ugliness in politics, the utter disrespect George Conway shows toward his wife, her career, place of work, and everything she’s fought so hard to achieve. Might top them all, Kellyanepolls is great person, and frankly, his actions are horrible.”

Now, this is in response to George Conway earlier in the day responding to one of Donald Trump’s tweets, pointing out these specific portion of the US legal code that Trump was breaking by, congratulating Roger Stone for not flipping on him. Eric Trump got mad that daddy was being called out and rightfully so, being called out. Um, so he decides to go after Kellyanne Conway and George Conway’s marriage, saying that George does not respect her.

George is bad for women. George is ruining his marriage. Well, luckily the good folks, uh, on twitter decided to hammer Eric Trump for this and repeatedly pointed out the fact that his father is cheated on every single wife he has ever had, that his brother cheated on his wife with a Fox News host whom he is now dating. And the fact that if you want to talk about who’s bad for women or not treating women fairly, then once again, look at your father, look at your brother, look at everybody else in your entire family and for the most part Republicans across the board. So yeah, Eric Trump got his come upins immediately upon tweeting this out. But here’s the thing, there’s actually been plenty of stories done. You know, reporters. I’ve actually spent time with boats. George and Kellyanne Conway together at their home and they’re married.

Seems fine. Yeah, they disagree about Donald Trump. George has made it clear that he does not like Donald Trump because he doesn’t like what Trump says. Now when it comes to the policies that Trump has put in place, when it comes to the packing of the courts, George is cool with that. George has no problem with that. George is still a Republican, a hardcore conservative who thinks that corporations should have all the power and the people should have none. There is no difference in policy between those two human beings just like there’s no difference in policy between George and Kellyanne and that’s why their marriage for the moment probably is okay. He just doesn’t happen to like where his wife works or who she works for. And as Eric Trump, if he ever spent any time with his actual wife would know, uh, most spouses kind of tend to not like the other spouse’s job or the other spouse’s boss.

It’s a common thing. It doesn’t lead to marital problems, you know, as long as it’s not creating fights, it’s just, yeah, your boss seems like a jerk because you’d go home. You talk about your boss, you only say the bad things, right? It happens. It is a common complaint in marriages, but it’s not usually one that ends them. But if Eric Trump wants to go out there and throw stones, he needs to remember that he lives in a glass house and he is not going to get away with trying to paint some other man in this country as being negative or bad for women. When he comes from the family that wrote the book on how to be horrible towards women and how to disrespect the marriage.