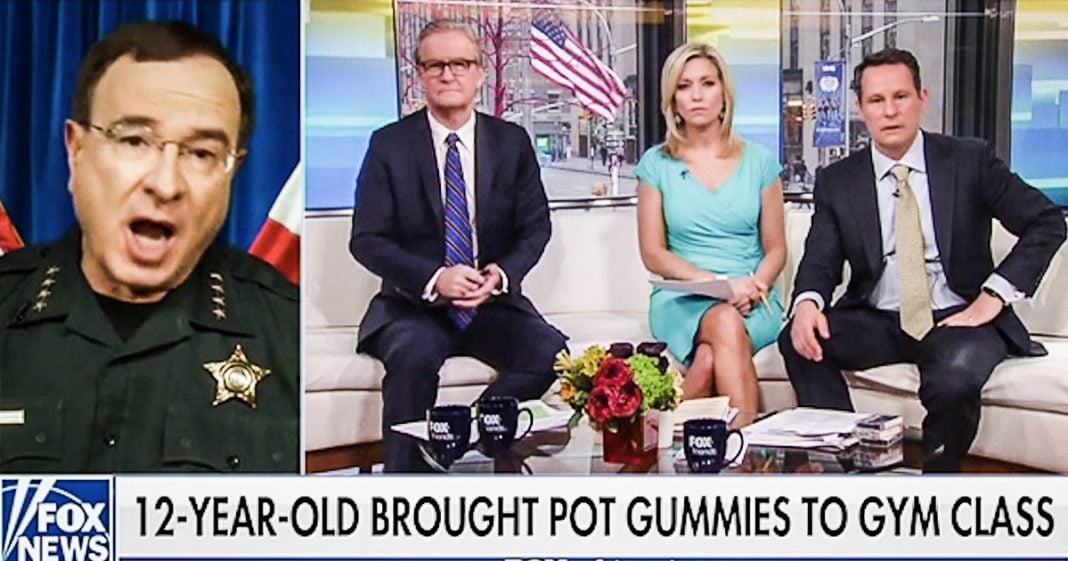 Fox & Friends on Monday discussed a story where a 12-year old Florida student brought pot gummies to school and shared them with classmates. Several children were taken to the hospital after becoming ill, but Fox wants people to believe that these kids could have died. Their guest, Polk County Sheriff Grady Judd, said that everyday people in the United States die from this, which is simply untrue. Ring of Fire’s Farron Cousins discusses this.

On Monday, Fox & Friends decided to take a little bit of time to tell us just how dangerous and actually deadly marijuana can really be. Now, what sparked this conversation is the fact that in Florida, a 12 year old boy brought a pack of marijuana gummies to school and distributed it to some of his classmates, uh, five of them ended up in the hospital because they got very ill. So obviously according to Fox News and the people at Fox & Friends, this is a huge international story, a deserving of wall to wall coverage. People are dying from these marijuana gummies. So take it away, Fox & Friends.

Pete Hegseth:
But no one talks about this. THC is addicting. People back the. I know so many people, they say they were told one thing and they tend to get addicted to it. And that’s an addicting substance there. There is a price to pay for Pot.

Polk County Sheriff:
There absolutely is a price to pay for pot. You know, I spent my entire adult life in law enforcement and a lot of it investigating traffickers of drugs and it’s not a minor nonviolent felony. It’s ruining families and killing people every day across the United States, and we stand here in denial thinking that it’s not a gateway drug to drugs that’s killing people.

Ainsley Earhardt
You don’t start with cocaine. You probably start with marijuana and it leads to other things, right?

Alright, let’s get several things straight here. First and foremost, it feels like the people at Fox & Friends and that a Polk county sheriff, we’re actually reading, talking points from the early 1980s. Uh, all of which, by the way have been debunked. Marijuana is not actually a gateway drug. And yes, there are plenty of people in this country who do start on things like cocaine. Uh, contrary to what Ainsley Earhardt said there, but the sheriff, that’s what really drove me crazy here, is he says, people die every day from this, talking about marijuana. People die every day in this country. Well, according to the government’s own statistics, there have literally been zero cases of people dying from a marijuana overdose in all of recorded history. Zero. None. Not One, never. So right off the bat, the sheriff loses all credibility by saying something that is verifiably untrue.

But here’s what really gets me about all of this. Why is Fox News carrying water for major pharmaceutical companies? Because that’s what these attacks on marijuana are about. It’s coming from Big Pharma. They’re the ones who fund the campaigns in states where they’re trying to legalize recreational or medicinal marijuana. They’ve pumped millions upon millions of dollars into these efforts. They pay off politicians in DC to stop any kind of marijuana research, medical research, whatever it is. They don’t want it to happen because they don’t want people to understand that there may be a low cost and no side effect alternative to their blockbuster pills. So why is Fox News doing their job for them? Well, I think the answer simple, advertising. Some of the biggest advertisers on all cable news channels, and even just in this country in general, our major pharmaceutical companies. So when you see Fox & Friends out there telling us that kids are dying from marijuana gummies, just understand that those are talking points that are coming directly from the major pharmaceutical companies who are terrified of losing any part of their profits to medical marijuana, which is exactly what would happen and what is happening in areas all over the country where marijuana has become legalized.