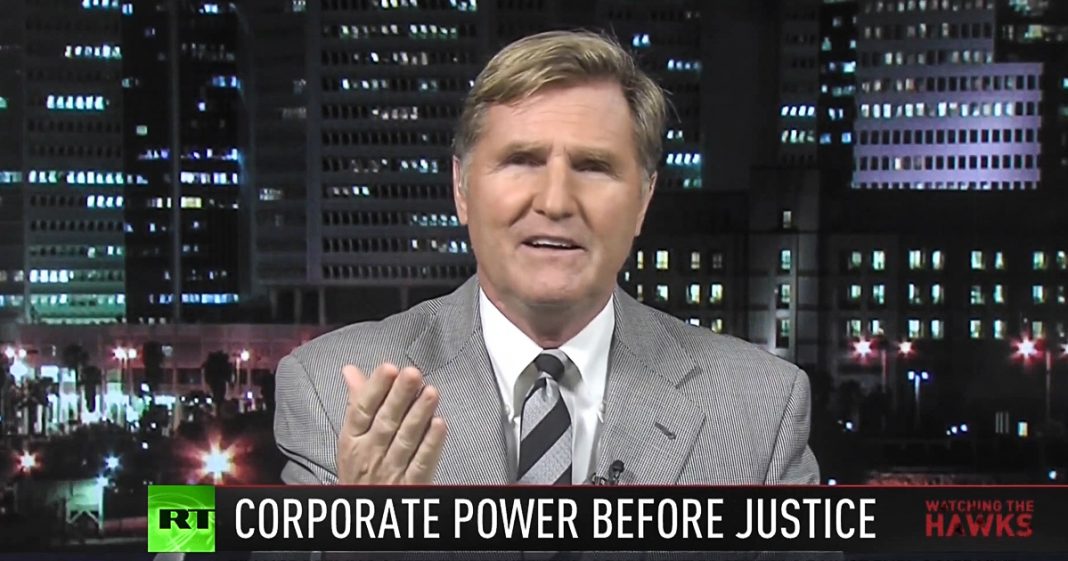 Via RT America – Watching The Hawks: According to Susan Spaulding from the Center for Strategic and International Studies, the hit show America’s Lawyer will “often weave genuine concerns and viable grievances in with misleading narratives.” Mike Papantonio, host of America’s Lawyer, joins Watching the Hawks to help make sense of this attack on RT America.

It’s all about how is Putin and the evil Russians are undermining our most sacred and pure criminal justice system. They said, “RT and Sputnik routinely produce content that alleges corruption, partisanship and fundamental unfairness of the justice system.” It seems that according to these experts, the Russian government is purposely trying to undermine American democracy by reporting on how Americans are losing faith in American democracy.

What happened to educating, informing, letting people use their own minds to decide for themselves? Well, that is what prominent trial lawyer, Mike Papantonio does every week on his RT America show America’s lawyer. Where he exposes the untold truths of corporate and environmental legal cases, and at least according to Spaulding and Rishikof, Papantonio’s hit show America’s Lawyer, “often weaves genuine concerns and viable grievances in with misleading narratives.”

And here to help us make sense of misleading narratives and another nonsensical attack on RT and all things Russian is the host of the hit RT America show America’s Lawyer. Welcome Mike Papantonio. Not Too much though, Mike, I don’t know if we can handle it.

Mike Papantonio: Right, I mean the attacks on RT have become predictable at this time. Any time someone comes after the network, you can bet they’re either funded by major corporations, which is the case here, or the DC insider establishment crowd, which is the case here. With the people from the Center for Strategic and International Studies, Suzanne Spaulding, you get both of those categories on steroids.

Suzanne Spaulding is trying to compensate for her failures at the Department of Homeland Security by drumming up new fears about Russia, RT and my program in particular, America’s Lawyer. She earns her money, this is what’s so interesting. She earns her money as this failed cybersecurity expert who advises corporations and governments more about fear. She created… the more fear she creates, the more money she gets. What’s really interesting about this, about this Spaulding woman is she gets all of her salary from corporate America. You understand?

She goes around the country giving these speeches about sites, about shows like America’s Lawyer, where we attack corporations when they do wrong. God forbid we actually talked about fracking. We actually talked about Wall Street’s stealing trillions of dollars from mom and pop investors. We talked about the idea of Big Pharma price gouging and selling drugs that were killing people. That’s not what Spaulding and her crew like. They hate that.

She comes from this thing called the CSIC group and she’s part, it’s funded, here’s what’s really interesting; when we did the research on CSIS, the group is almost entirely funded by military contractors who by the way, would love to churn up a new cold war with Russia, would be delighted to go to war with China or Iran. She’s funded by foreign governments, particularly Saudi Arabia. Dubai funds this woman to the tunes of millions of dollars.

All these hawkish pro war think tanks in DC, she is the leader of that very big movement. So that it’s no surprise that she would attack America’s Lawyer and RT, for as God forbid, we tell stories that corporate media is terrified to tell because their advertisers won’t let them do that.

Tyrel Ventura: And you do that really well, Mike, week in and week out. And I think it’s important that people are able to see shows like yours so they better understand the criminal justice system and how it works in this country. That’s really when you get to the truth of it, at the end of the day, am I right Tab?

Tabetha Wallace: Yeah. I mean, what’s really interesting is when you look at Suzanne Spaulding, as you said, worked in the Homeland Security. She’s worked in all of these areas and her connections tend to be; and when I looked, when I read a lot of her analysis about Russia, it’s all very, it sounds like it’s from 30, 40 years ago. It’s, it’s very, the Russians are known to do this. The Russians are doing, they’re going to do this and corporations will save us from the evil Russians. That’s most of what her analysis is.

Tabetha Wallace: What’s your take on her take about the Russian threat, and why is that fear based, you know, ability so easy?

Mike Papantonio: Right, well, she has to. Look who pays this woman money? McDonnell Douglas, Boeing, all of the arms industry pay her money. The oil industry, Exxon, Shell, she gets money from them. She gets money from the Pharma Industry. She is nothing more than a talking war pimp. She is a war pimp for places like the weapons industry who would love to create a new cold war with Russia. For the Exxon and all those folks, she’s perfect for them because she gets out and she has credentials.

She won’t talk to them. Consumer advocacy groups, she won’t talk to them. Any kind of advocacy groups that looks out for the American public. She’s not a part of. She is tied at the hip with what we call the corporate war machine. You know, whether it’s Boeing, McDonnell Douglas, they love to sell missiles. This is the woman you call. Look, there’s a great show. What was it Wag the Dog?

Mike Papantonio: Wag the Dog, I think it was the name of it. It captures who she is. She would love to start a cold war with Russia. No question about it. She bought into that whole democratic, stupid talking point that Podesta launched because he’s such an idiot. He lost the election for Hillary Clinton. They had to blame Russia. What happens next? Then the arms industry sneaks in there, right? They’ve got the talking point out there.

Russia was why Hillary lost. The arms industry moves into that space. They hire people like Suzanne Spaulding to go out and talk about that. Do yourself a favor. Take a look at the Aspen group that she’s a part of. Go take a look at it. See what she’s about. The Aspen group would be delighted to start a new cold war with Russia. They would go to war with China tomorrow given the chance because they sell missiles. It’s just like you saw in Iraq.

You remember when Msnbc had this big buildup to the war on Iraq? My ex law partner, Joe Scarborough, was every day on the air talking about, we need to go to war with Iraq. Why was he doing it? Because Boeing and McDonnell Douglas were pumping huge money into Msnbc for them to do that. Now why does Boeing going Msnbc and talk about cruise missiles?

Are you going to go out and buy a cruise missile? Probably not. But they understand how to spread around money and that’s all they’re doing with this woman. They’re spreading around money. She’s their mouthpiece. She will say anything they need them to say and right now the talking point is be afraid, be very afraid of Russia. Rather than talking about real issues like we try to do on America’s Lawyer.

We feel like when an industry or corporation causes harm to the American public, we should talk about it. We think it’s important when Republicans have taken control of the judiciary and most of the federal judges that are now appointed are all, they all come from that corporate background. That has a huge impact on the American public. So what’s the option? Don’t talk about it. That’s the only talking about.

Tyrel Ventura: I know, right? And that’s the thing that I wanted to kind of bring up too, is that, you know, this isn’t… this American public not having faith in the US judicial system or in our justice system. That’s not something that was invented from 2016 on. That’s been something that’s always been there. You’ve worked your life in the law business and the business of law and the judicial system and the law system. That’s something that the idea that like the only reason that you do America’s Lawyer is to erode the very system that you’re fighting to improve is ridiculous to me as an argument. Is it not?

Mike Papantonio: Look, I believe in democracy and capitalism 100 percent until you put the thugs in the business. And the thugs are the people who Suzanne Spaulding supports. The thugs that want to start a needless war like Iraq.

The thugs who would love to go to war with Russia and start a new cold war. The thugs who every day, somehow, Wall Street who takes advantage of American consumers every single day. And you know what, corporate media won’t talk about it because they’re part of the program. So America’s Lawyer comes out and we talk about these cases, we talk about the things, real issues. We aren’t afraid to call out a corporation and the government when they harm citizens and consumers, and that terrifies the establishment in Washington DC.

That’s who she’s part of. And don’t forget lawfare, the blog who actually caught her saying this and then did a big story about how dangerous RT is because we tell the truth. Let’s not talk about, let’s not forget to talk about those founders of that group. You probably know who they are. They’re a scary bunch of folks.

Tabetha Wallace: Yeah, I think there’s a lot that we; you have to know who’s giving you the message and be honest about it. But you gotta you gotta stand up for the criminal justice system. And I’m glad we have people like, like Mike Papantonio out there fighting for it.

Tyrel Ventura: Mike, thank you so much for coming on today and illuminating us on the truth behind this story.

Mike Papantonio: Thank you for the invitation.