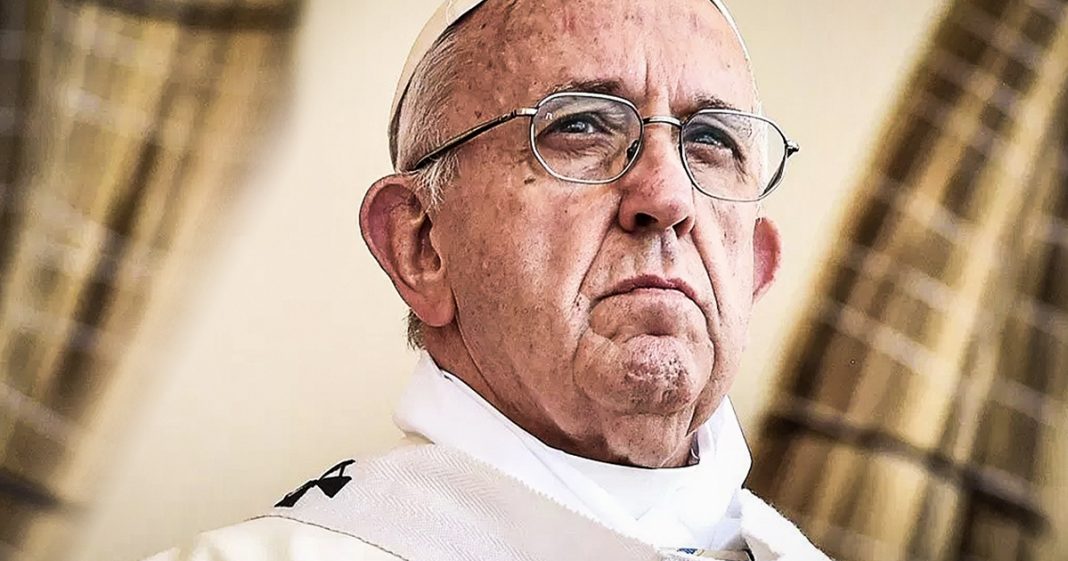 Pope Francis has been viewed as a revolutionary figure in the Catholic Church, upsetting norms and condemning the excesses of the Church. But he recently showed that he’s not all that different from past Catholic leaders when he claimed that the clergy needs to do a better job of rooting out homosexuals applying for priesthood – because the gay lifestyle is so “fashionable.” Ring of Fire’s Farron Cousins explains these comments and also the real causes of the church’s problems.

You know, a lot of people have viewed Pope Francis as a somewhat progressive leader of the Catholic Church. You know, he, he came into the papacy there and he started going after the excesses of the church. You know, we took a lot of churches that spend a lot of money on decorations and building these enormous churches. He turned him in the homeless shelters. You redirected that money to helping the needy, something that church has been ignoring for decades now. He’s also made some progress on social issues. Said that, no, I’m not going to say gay people are going to hell. They can absolutely get into heaven, but he’s got a new book out. And uh, he kind of undoes all of the good progress that he had made since becoming the pope, the leader of the Catholic Church. And in his book he laments the fact that the homosexual lifestyle has become, quote so fashionable that it threatens the very church itself.

Now he goes on to explain that, you know, the prevalence of homosexuality, the, the acceptance of it is leading to more homosexuals, more gay men trying to become priests in the Catholic Church, and we got to stop that. We have to stop, we have to increase the vetting process to make sure we’re not letting gay men become priests and Catholic Church because Pope Francis thinks that’s why we have so much pedophilia in the church. So Pope Francis apparently thinks that pedophilia is the same thing as homosexuality. Uh, it’s not in case anybody was wondering that that is an absolute delusional sickness that some people have versus a sexuality. But Pope Francis just equated the two effectively undoing any of the progress that he may have done for the church on the LGBTQ issue right there. One book was released this weekend in Italy where he tries to equate those two things.

First and foremost, if you have gay men that want to become priests, that is not going to increase your chances of pedophilia, which is actually the real problem in the church anyway. It’s the pedophiles. It’s the grown men out there, diddling children, and you can forget about it being just a homosexual thing because we’ve also had plenty of young girls that have also been abused by the church and that’s like saying we can’t have heterosexuals become priests because they’ll just start having sex with every young girl that walks through the door. Obviously not the case. Is it there? Pope Francis, you’ve once again expose the hypocrisy and the backwards ways of thinking of the Catholic Church. That’s why people like myself who grew up Catholic, abandoned the church years ago because of its disgusting attitudes. It’s coverup of these pedophilia activities going on with priests all over the world and their refusal to admit that they made mistakes and to try to work towards a better tomorrow. The Catholic Church has continuously failed on all of those issues and the more they fail, the more people are going to abandon this particular institution.