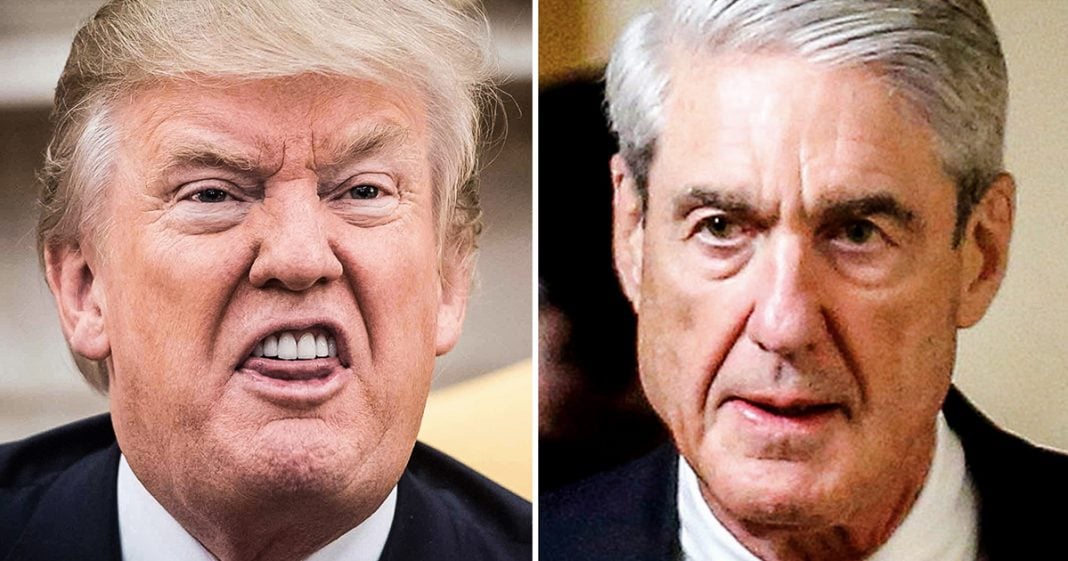 Donald Trump spent the past week attacking Special Prosecutor Robert Mueller and his so-called “team of angry Democrats.” These attacks are sounding more and more desperate, and they are coming at a time when more and more of Trump’s pals are either making plea deals or heading to jail. Ring of Fire’s Farron Cousins discusses the motives behind these recent attacks.

In case you don’t follow Donald Trump on twitter, let me give you a recap of what the man’s been doing for the last few days he has been going on nonstop about the Mueller investigation, the Special Prosecutor’s office, uh, the alleged angry Democrats running this investigation, saying that they’re plagued with conflicts of interest, wondering if the final report from Mueller is going to talk about his own conflicts of interest, and more importantly, also wondering why in the hell they’re not investigating Hillary Clinton and all of the other Democrats out there, trump has been going nonstop about this investigation. Basically since he submitted his written answers to some of others questions not that long ago. He’s back on the wagon back attacking Robert Mueller and the investigation itself, trying to undermine it for the American public before the final results come out. And as we mentioned many months ago, because Rudy Giuliani said this was their plan, they increase their attacks on Robert Mueller in an attempt to downplay whatever the results are gonna be.

You de-legitimize the entire investigation before the results come out to make fewer people believe what those results tell us. Here’s the problem they have with that little scenario, you have people in this country that have already made up their minds on both sides. Those of us who believe that Donald Trump has done something wrong are going to believe that no matter what that final report says, those of us who believe that Donald trump is completely innocent and this is a witch hunt, they’re going to believe that no matter what this final report says, you’re not going to change the minds of those people, but you do have a very select few right down the middle here who may be swayed one way or the other, but they’re not going to be swayed by Donald Trump. Rage tweeting lies about the special prosecutor’s office that we all know are not true.

It is not being run by a bunch of angry Democrats. Robert Mueller is not conflicted with all of the conflicts of interest that trump claims happen, and it’s certainly not a witch hunt. Yeah, it’s been going on for 18 months and Donald Trump has tweeted out it’s cost a lot of money. You know what? Actually in just the assets they seized from Paul Manafort, the investigations technically turned a profit. They’ve pulled in more money than it has costs to run, so right now, pulling into profit. Hell, government needs money. Let them keep going as long as they want to. You’re already starved of tax revenue. You might as well get it whatever way you can, but here’s the thing about the alleged, which on 32 people charged for AIDS have pleaded guilty to various charges for former aids to Donald Trump, have pleaded guilty to charges 32 people total charged.

That is one hell of a successful which on if you ask me, that’s a lot of witches, but Donald Trump doesn’t ever want to talk about that. He just wants to say witch hunt in all caps with several exclamation points at the end of it, but just saying it, just tweeting, it doesn’t make it so the American public sees what’s going on. At least I hope most of us do. He’s trying to undermine the investigation so that when the results come out, fewer people will believe that it’s true. But Mueller is smart and trump is not, and Mueller has evidence and trump does not. And at the end of the day when the American people finally see the final report, and hopefully we get to see that evidence, Donald Trump’s attacks on Robert Mueller’s will not have changed any of the minds of the people who are ultimately going to be deciding his fate. Shitty survive to 20 slash 20.