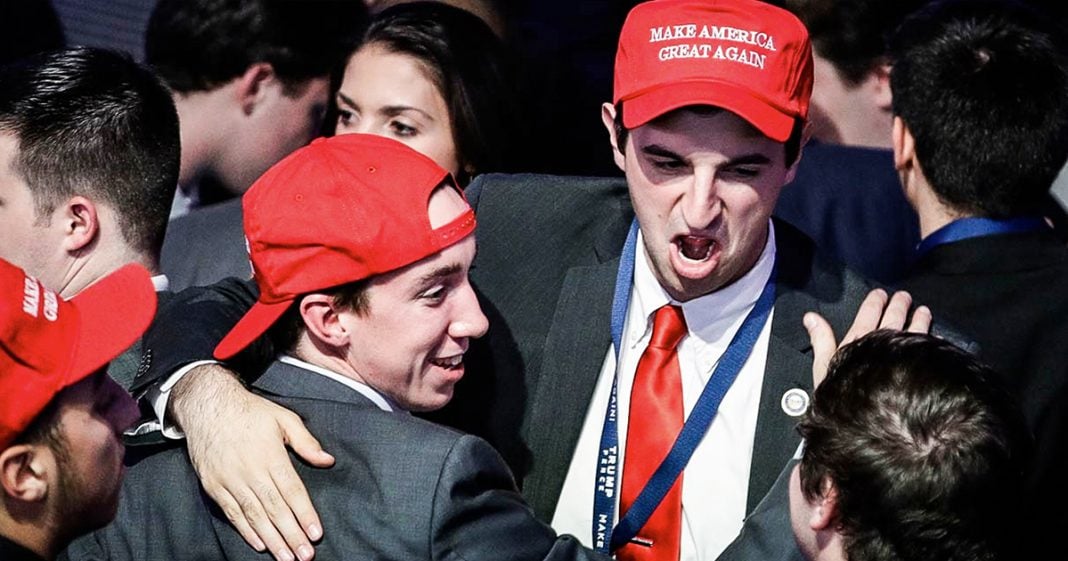 According to a new op-ed by an NYU psychologist, Donald Trump is able to manipulate men who suffer from fragile masculinity, and that is what has propelled his success in politics. The arguments made are quite convincing, and even looking at the way Trump behaves gives us insight into what kind of person would find that behavior appealing. Ring of Fire’s Farron Cousins discusses this.

According to a new op Ed in the Washington Post, a New York university psychologist, along with a psychology doctoral student, have kind of identified part of Donald Trump’s base and they believe that fragile masculinity is what helps Donald Trump maintain what little bit of support he actually has. Um, and they did a lot of great research for this and I fully agree with them 100 percent. The science they use is quite sound, but here’s what they were, they’re basically trying to say is that Donald Trump was able to attract men in this country to vote for him, but it was men who are suffering from what they’re calling fragile masculinity and they’ve come up with the fragile masculinity hypothesis because that’s what this is. This is a hypothesis. They’re laying out their evidence and they’re trying to make sense of it. One of the things they did to determine whether or not these fragile men supported Donald Trump was they compared voting records for a certain area with Internet search terms, and this is the best part.

Here are the search terms that they found a correlated the most with Donald Trump. Supporting areas of the country, erectile dysfunction, hair loss, how to get girls, penis enlargement, penis size, steroids, testosterone and Viagara areas who had higher search, uh, uh, I guess queries for those particular terms. We’re more likely to vote for Donald Trump. Now, if you’re very secure in your masculinity, I’m assuming you’re not searching for things like erectile dysfunction or hair loss or how to get girls and penis enlargement, but those were the people in the areas who tend to vote in higher numbers for Donald Trump. And here’s what’s even interesting. They went further back to see if maybe this was just a republican thing and it turns out it’s not because there is no correlation between those search terms and increased support for John Mccain in 20 2008 or Mitt Romney in 2012. This is a uniquely Trump experience.

Donald Trump has awoken the cult of fragile masculinity. And here’s how they did it and they explained it this way. Trump comes out there and when you are lacking in your own masculinity or you’re too insecure about it, you will latch on to a politician or a leader who exhibits the traits that you feel are necessary to be masculine, which Donald Trump, honest to god, totally not masculine, but he can give that appearance. I guess I could see that to insecure people, he has this hairpiece or whatever the hell is going on up there because he’s too proud to admit that he’s actually bald audit. Bud started losing my hair at 19 years old, never looked back, whatever it happens, he’s overweight, but he’s a bully and he’s a tough guy and he’s gassing children at the border and sticking them in cages and somehow that makes him a manly man.

He eats Mcdonald’s almost everyday. He goes golf and he’s a billionaire with a hot wife who married them only for his money, but they don’t see that part of it. They just see he’s a billionaire with a hot wife. That’s what they think masculinity is supposed to be, and that is why they’ve latched onto Donald Trump because according to these psychologists, they lack those traits in themselves. This is toxic and toxic masculinity is something that affects a this entire country, coast to coast and border to border, but when that toss a toxic masculinity becomes our politics, which it has with Donald Trump, then we’ve got real problems. That’s why poll showed that 45 percent of men would not be comfortable with a woman being president. This is absurd. We have to move past this. These men need to figure out what it is in their lives that is missing, that is making them feel so insecure and I understand insecurities are a big issue.

They affect men and women, you know, different cultures, different races and religions and all of that. But if that’s what you’re suffering from, then do yourself a favor. Do the country a favor and start setting up some appointments with therapists. You know, try to get to the root of your problems. Don’t try to latch onto this person, this creature, Donald Trump, that you think is the embodiment of masculinity, putting the entire country at risk just because you’re too insecure about yourself to actually go sit and talk to somebody in workouts, your issues. There are simple solutions to some of these problems and seeing a psychiatrist, psychologist, therapist, whatever it is. If some of these men had taken that step three years ago, maybe we wouldn’t have a jackass like Donald Trump sitting in the oval office.