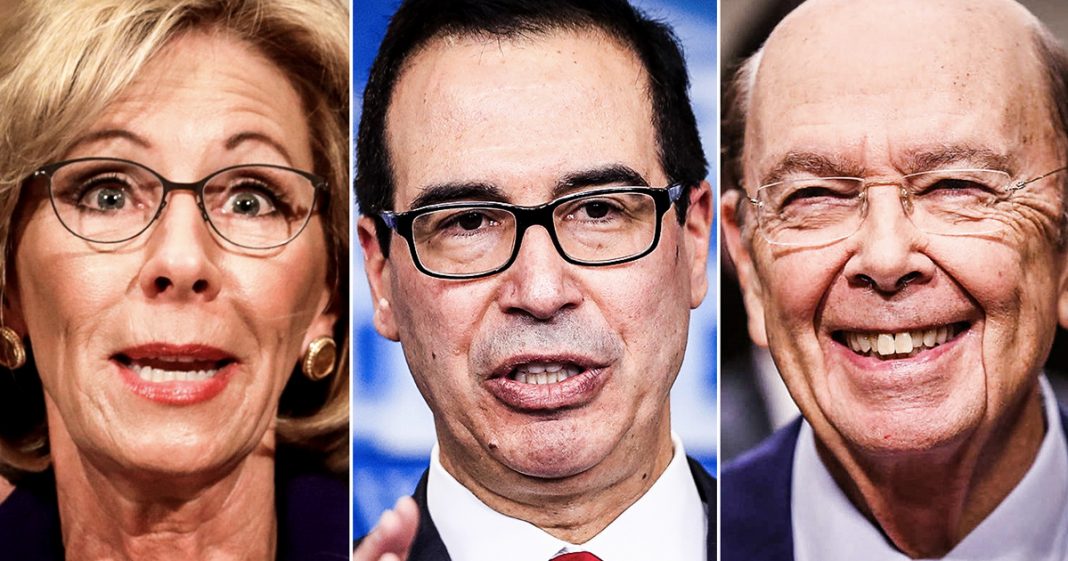 Description:  According to new financial disclosure releases, several members of Donald Trump’s cabinet made tens of millions of dollars last year (their first year serving in the administration.) While most of them did, in fact, divest their fortunes, the fact that we have so many multi-millionaires running our government is a warning sign that something has gone wrong. There has not been a single piece of legislation or new rule from this administration that has benefited the bottom 99%, as Ring of Fire’s Farron Cousins explains.

Donald Trump’s cabinet is filled to the brim with millionaires, people who have more money than they know what to do with, and the top three wealthiest people, Betsy DeVos, Steve Mnuchin, and Wilbur Ross. They all made tens of millions of dollars while serving in the federal government. Just last year, according to the newly obtained financial disclosure reports of these three multimillionaire individuals, again, they each walked away with roughly tens of millions of dollars in profit. Now, some of that money did come from divesting in things that they owned in stocks and other companies. They did divest a little bit of it, so they sold that off and they made money and that gets reported, but most of them didn’t divest Steven Mnuchin, believe it or not, actually did a good job divesting the ethics. A folk show that yes, he did divest all of his stuff, but he made a ton of money selling it off or investing in others, but Betsy DeVos and Wilbur Ross didn’t fully divest.

In fact, they both still own stakes in companies and other businesses that directly benefit from the policies that they put in place. In fact, Wilbur Ross is facing a math, a massive investigation at the moment because he seems to only be using his office to make himself more money, and that’s the. That’s the takeaway here. That’s the point right now in the United States and even before Trump came into office, we have government run by millionaires for the benefit of millionaires, the federal government, the way it is right now, and this may change in January with some of these new coming Democrats in the House of Representatives, where right now the government only works for millionaires. Energy become exceptionally bad during the years of Donald Trump. Now, let me ask you this question and please if you, if you’ve got an answer to it, comment on this video, but let me tell you.

Think of one thing that this administration, any agency within this administration who one thing they’ve done that’s been for the benefit of American consumers and not to benefit a corporation. I have been covering this literally every single day since this man was sworn in and even well before that, and I can promise you there’s not one thing. There isn’t one thing, there isn’t one rule that Betsy DeVos is department of Education or Steve Mnuchin as a secretary treasurer, a secretary of the treasury, excuse me, or Wilbur Ross at the Commerce Department. There isn’t one rule any of these people have put in place that actually benefits consumers over corporations. Not a single one. Same thing with the EPA. They don’t give a damn about people anymore and it’s the same thing with the Republicans in the house and the Senate and the White House. Now again, the glimmer of hope is that we’ve got this new democratic majority coming into the House of Representatives.

We’ve got a lot of progressives, a lot of populous people pulling the party to the left, denying money from corporations working for the people, but at this point, so much damage has been done that our government only functions if you’re in the top one percent. If you’re in that top one percent, you’re protected. Don’t worry about the rules coming out of this government because they’re going to be to your benefit, but if you’re the rest of us, you worry about things like paying for your health insurance, paying for prescription drugs, worried about the safety of the water that comes out of your tap every time you turn it on, worried about the quality of our food. That seems to be getting recalled because of things like Salmonella and e coli every other day. You know, we can’t even have a meal without worrying if it’s going to poison us because we’ve cut funding for the FDA to actually go out there and do food inspections so that meat packers could save $12, million dollars this year. That’s actually a thing that happened folks. That’s why we’ve got so many Salmonella and e coli recalls right now. We’re struggling. We’re getting poisoned by food. We’re getting poisoned in the environment. We’re getting poisoned by corporations, but the top one percent is doing just fine. They don’t have to deal with the same crap we do because the federal government makes sure that those millionaires and billionaires are 100 percent protected because those millionaires and billionaires, at least right now, not only are they running the government, but they’re making sure that the government only works for them.