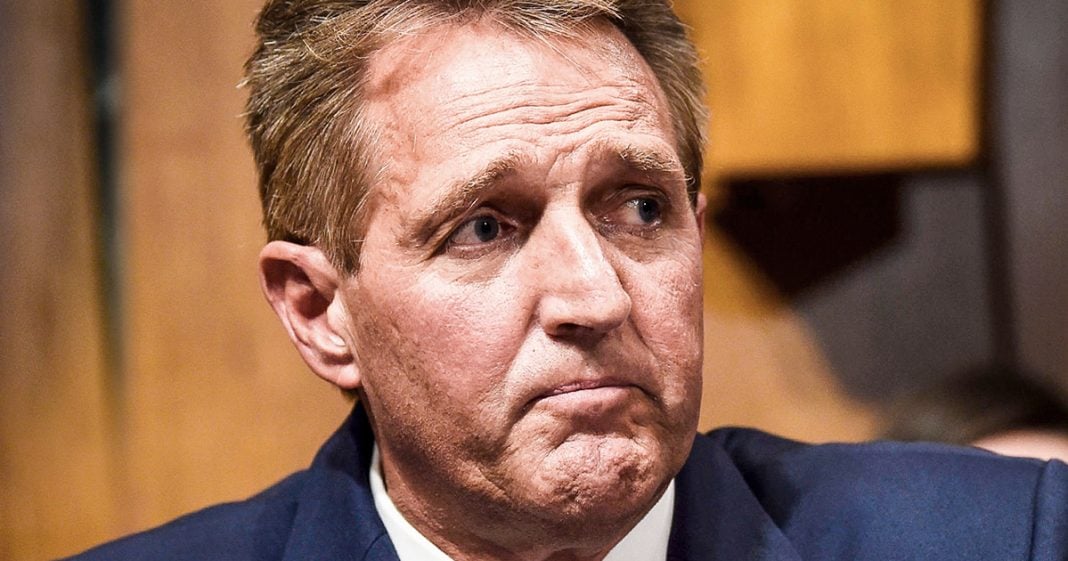 Republican Senator Jeff Flake swore that he wasn’t going to vote yes on any more Trump judicial nominees until the Senate passed a bill protecting Robert Mueller. But, as we all expected, Flake lived up to his name and reneged on his deal and allowed a controversial Trump nominee to a lifetime appointment on a bench. Ring of Fire’s Farron Cousins explains why we need to stop listening to people like Jeff Flake when they act like they’re going to stand up to their party.

I’m going to start by just throwing this out there. Jeff Flake, Republican Senator Jeff Flake is an absolute piece of crap. Honestly, that could just be the end of this video. Just saying, Jeff Flake is a piece of crap and I think everyone would understand exactly what I’m talking about, but for those of you who don’t, let me go ahead and explain a little bit more. Earlier this week, Jeff Flake swore up and down, said in an interview on CNN that I will not vote for any more of Donald Trump’s judicial nominees until we get a bill passed to protect special prosecutor Robert Mueller. He said, I am not. I’m not equivocal about this. This is not a flexible deal am standing firm. No judges till we protect Mueller. Literally took them two days to go back on that promise. Now, those of us who have been paying attention to Jeff Flake knew that he would never intended to actually vote against Donald Trump’s judicial nominees.
But the way he did it is what makes it so disgusting. There was a vote, uh, believe the, the nominees name was Jonathan Kobes. I’m Flake if he voted no, would have effectively killed. That means nomination because Jim Inhofe was out. He couldn’t vote that day, so it was 49 to 49, 49 to 49. Jeff Flake. Had he voted no, would’ve put it 50 to 49. Kobes is out the door, but instead Jeff refused to vote. Instead allowing Mike Pence to come in, break the tie, and you can pretty much figure how that happened. Kobes is heading for a lifetime appointment to destroy the reproductive rights of women. Thanks Jeff. Flake for being such a horrible mealy mouth piece of crap. Human being. You know I am sick and tired of the media hyping up these Republicans who swear I’m going to stand up to trump. I’m going to do something.
I am not going to let him push us around and destroy the Republican Party. As soon as the God damn cameras turn off, these idiots go back to the chamber and they vote with him like Flake was 84 percent of the time. 80 seven percent of the time. This is insanity. They do not vote against him. They vote with him. All they’re doing is putting on a show for the media, possibly even setting up a a presidential run down the line. They’re worthless. They’re worse than worthless at this point because they’re liars. We knew. I mean, honest to God, I don’t think anybody was fooled about Jeff Flake coming out on CNN and saying, I’m blocking these nominees. We knew what this man was gonna do. Hell, it’s in his name. He is a Flake. He is an absolute worthless waste of space in the United States Senate, and God bless. I cannot wait until they swear in the new Senate. Jeff Flake disappears and we don’t ever have to deal with his lies and his weakness again.