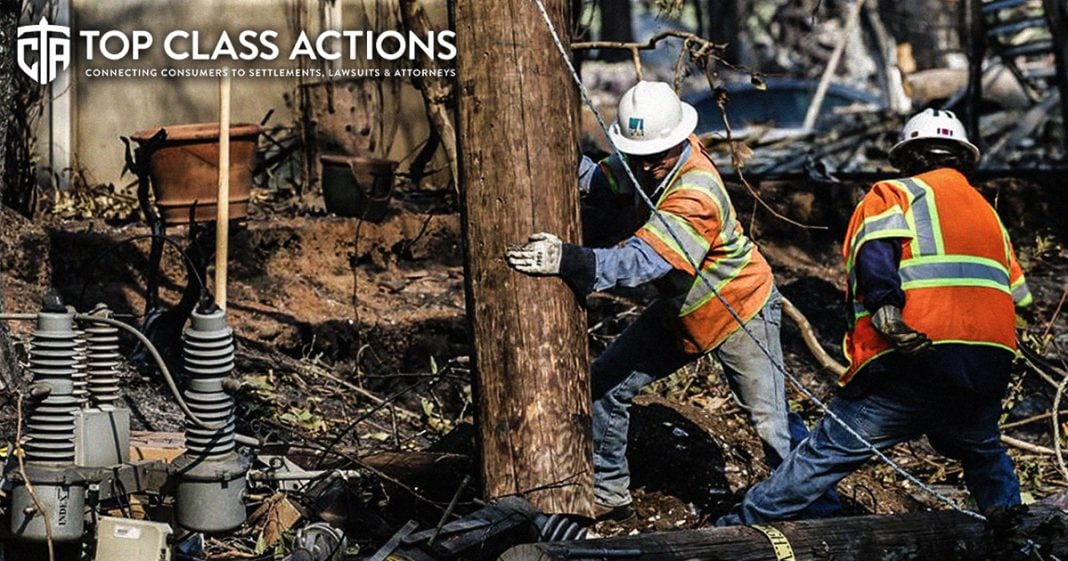 Lawsuits are beginning to be filed against utility companies in the state of California over their role in the massive wildfires that have ravaged the state over the last 12 months. Investigations show that faulty equipment from companies like PG&E are likely to blame for the fires, and Ring of Fire’s Farron Cousins discusses these new developments with Scott Hardy from Top Class Actions.

Farron Cousins: Officials say that the Camp Fire wildfire in the state of California has officially been contained at this point. There are still areas that are ablaze, but they believe that they have controlled the fire enough to where it’s not going to continue to spread. Now that one nightmare is over, another nightmare is about to begin for the victims of this wildfire and that is the legal landscape, the insurance landscape that they’re now going to have to navigate. And joining me now to talk about this is Scott Hardy from top class actions. Scott, you know, I live on the Gulf coast. We’ve gone through hurricanes and every time that disaster ends, we all have to go through the nightmare that is the insurance. There’s always lots of lawsuits because insurance companies don’t want to pay. We’re about to see the exact same thing happen in the state of California, aren’t we?

Scott Hardy: That’s exactly right Farron. And you know, we’ve seen the, we saw that the Thomas Fire burned more than 300,000 acres and now with the recent Camp Fire, which was one of the largest wildfires, deadliest wildfire in California history and so much loss of life, homes and businesses that people are going to be going through a huge nightmare to try to get compensated even if they are well insured and that’s really scary for someone that may have lost literally everything to then go to their insurance company and have problems.

Farron Cousins: One of the issues that we’ve seen and, and there’s actually multiple different lawsuits, but we’ll focus on insurance for the moment, is the fact that in the state you have to have a special kind of fire insurance in addition to your regular policy. So if you do not have the special wildfire insurance, you might not be covered. Or in some instances if the fire, you know, partially burns a tree, but then the tree falls down on your house. They may say, no, that’s not fire insurance. Insurance companies are always going to try to find a way to say, no, we’re not responsible for what has happened here. And that’s what causes a lot of the litigation because obviously if you are well covered with all of your insurances, somebody is going to have to pay, but no insurance company, you know, you may have fire through one home for another, they want to say the other one is responsible and start this back and forth that many times can take months and sometimes even a few years to properly navigate. And that’s what’s kind of happening at the moment.

Scott Hardy: Right, exactly. And it’s something that we see that’s really interesting as people are going through the claims process, as they say, Hey, I’ve got the right fire insurance, I’ve got my homeowner’s insurance. I am covered. I dont have anything to worry about. Why would I want to involve a lawyer? Why would I want to go ahead and talk with anyone else, my insurance company has me. But as you mentioned, the insurance company, they’re trying to make sure that, that you’re, that you’re covered and they’re going to cover you to the limits of your coverage. But many, many, many, many people. In fact, what we’re hearing, a lot of this, most people, especially in an expensive area to live like California, they’re under insured.

And so they won’t even know that they’re under insured until they’ve actually gone through the process of, they’ve submitted their claims, they’re claims been approved and now their house is getting rebuilt. Okay, great. But they received $500,000 to rebuild their house and in fact right now it’s going to cost them $750,000 because remember, especially with this Camp Fire and the fire that blew through Malibu, you’re going to have a lot of people that are all going to be, try to re rebuild at the same time and so that person might run out of coverage in terms of having a rental house available or having a hotel to stay in as they’re waiting for their house to get rebuilt. They might have had all of these 200, 100 plus year old oak trees that are sitting there on their property that were beautiful and now they’ve been wiped out and they’re insurance company won’t cover it. And so what a lawyer will be able to do is they’ll be able to help people get to their insurance company, try to make sure that they get paid, that you’re compensated to get their actual house replaced, and those trees replaced. And then as we’ve seen from the Camp Fire, as we’ve seen from the Thomas Fire, PG&E the utility company out there has already admitted fault for starting these fires.

And so you’ve got people that lost everything. It wasn’t their fault. They’re properly insured and the utility provider may have been able to do some things to help lower the risk or even stop the fire from happening if they had done proper maintenance on their power poles, the utility boxes, et Cetera. And so that’s one more area that an attorney can help a homeowner with or a business owner to try to make sure that the fully compensated for their losses. And that’s the most important thing, is getting fully compensated for your losses. So you’re taken care of and not sitting there with a half done house or having to pay out of pocket while you’re waiting for your house to be rebuilt or having to figure out how to, you know, if you lost your business now what are you going to do. I’ve already received reports from business owners, from the Camp Fire that said I lost everything. Now the people are gone, my business has gone. I had insurance, but what do I do? And that’s where a lawyer come in and try to help you out.

Farron Cousins: Right? I mean, that’s a long stretch of not having your business operating. You lose a ton of money. And as you pointed out, PG&E, you know, that’s the other, the other lawsuit and that one little bit more tricky because right now PG&E, as you said, they’ve admitted that it was their fault. Reports have come out and shown that they actually knew that their equipment was faulty. We’ve known that for several years actually, and several other massive wildfires have been attributed to faulty, uh, I guess transformers or what have you, from PG&E, but as of, I believe a couple of days ago, the legislature in the state of California is actually working on new legislation that’s going to allow PG&E to shift the costs of wildfire clean up and the resulting lawsuits back onto the customers.

So here we have people have lost everything. They have to go through the nightmare of dealing with insurance companies and possibly lawsuits against PG&E and then even if they get through both of those, now the third strike against the consumers who literally did nothing wrong, they might have to pay for the costs of this to PG&E in the form of higher utility bills. That’s what’s happening in the state of California right now in their legislature as we still have, I think 500, 400 missing people and the legislature is worried about protecting the utility company, not protecting the consumers.

Scott Hardy: Right? It’s a real travesty that you’ve got the utility trying to watch their own butts and make the people who actually suffered through this whole tragedy and that lost everything and they’re going to try to make them pay twice. I mean it’s, it’s a real sad shape of affairs in California where the legislators are backing the utility rather than their own constituents to make sure that their constituents actually have a place to live in again and can rebuild their lives after having a devastating loss like this instead of backing the power company to try to make sure that they can dig a hole out of it themselves. When you know that power company is very well insured and there’ll be able to pay off these claims, they’ll be able to take care of it, but the average person who lost everything, it’s not going to go as well for them unless they get help.

Farron Cousins: Right there’s too many people that will probably never be made completely whole again after this fire. Obviously that includes the families who lost loved ones in it; who still have missing loved ones. But even if you were lucky enough to have your and your whole family survive, the chances of being made completely whole again from this because of the influence that companies like PG&E have in California, those chances are slim. The only chance you have is through the trial lawyers is through these class action lawsuits because that is one of the only ways that these companies, whether it’s insurance or utility, that they’re actually going to be held accountable and pay for what they’ve done to the state. Scott Hardy, listen, this is a great story. I appreciate everything you do with this. If anybody needs more information, you can follow the link in the description of this video. You can also subscribe to the top class actions newsletter. They have more information about this story, so please get educated, get what you need. And Scott Hardy, always a pleasure talking to you. Thank you very much.