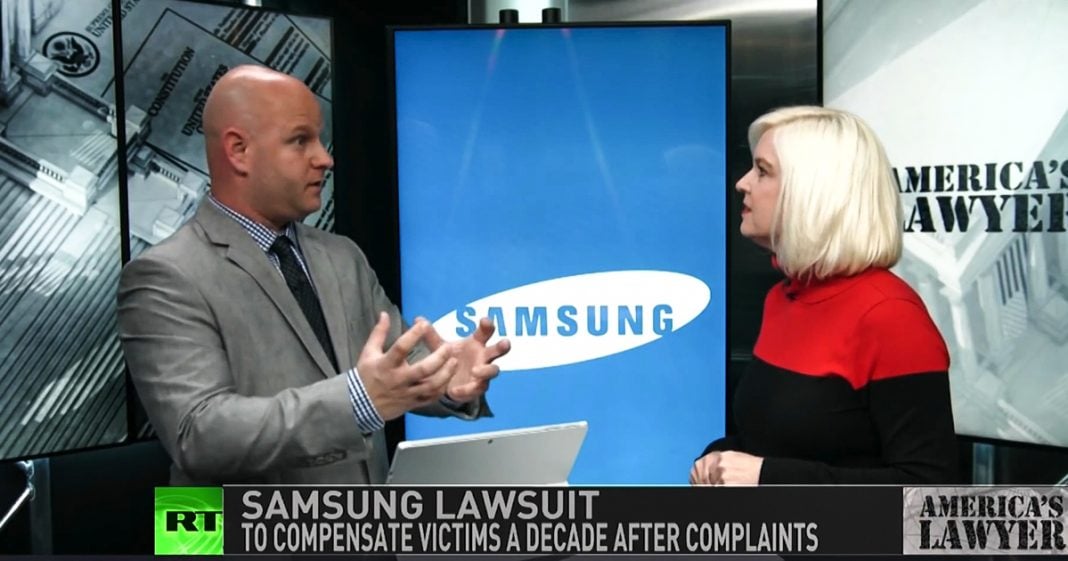 Via America’s Lawyer: Legal Journalist Mollye Barrows joins Farron Cousins to talk about Samsung Electronics, who for decades failed to create a safe working environment, causing illnesses and deaths at its computer chip and display factories.

Farron Cousins: Samsung Electronics, who for decades failed to create a safe working environment, has finally agreed to compensate victims for illnesses and deaths, caused at it’s computer chip and display factories. Joining me now to discuss this is Mollye Barrows, legal journalist for the Trial Lawyer Magazine. So Mollye, tell us, give us the quick take on what has happened with the Samsung story, what’s going on there?

Mollye Barrows: In a nutshell, this started about 10 years ago. So a group of people or organizations that basically represents sick workers had been saying, hey, a lot of these workers that work in your Samsung factories specifically those that make microchips as well as computer screens, that sort of thing, computers, they’re getting sick. They’re coming down with rare forms of leukemia, different types of cancers, they’re having miscarriages.

And initially Samsung was pushing back. One father, a taxicab driver in South Korea said that his 22, 23 year old daughter died of leukemia after working for the plant, I think less than 10 years, they only five years. And in fact, that came out and a lot of this data that a lot of these people that were sick had been working there less than 10 years after being exposed to these chemicals that they use to make a lot of the stuff. So in essence, Samsung finally apologized last week.

There’s been arbitration for about a decade now over these claims and part of the settlement was you have to apologize and you have to pay x amount of dollars for certain illnesses. And going back to 1984; in fact, anybody that worked at these plants and suffered a miscarriage and some of these 16 different types of cancers can apply for compensation for this. But Samsung is still not necessarily admitting that they did anything wrong. They’re just saying, yeah, we could’ve done more to improve workplace safety.

Farron Cousins: Yeah. So it’s the settlement that they’ve agreed to is about $130,000, I guess, per victim per illness.

Farron Cousins: Up to, yeah. That’s virtually nothing. I mean, let’s be honest, that’s nothing for a company like Samsung.

Mollye Barrows: Absolutely. And it’s so interesting, you know, their financials just came out for 2017 second largest tech company in the world, second only to apple. Their revenues last year, $225 billion a profit of $41 billion. So the more I looked into this, it was so interesting, the more I realized that these chemicals that they’re using to make these computers, things like ethylene and benzene, they’re carcinogens there are known to cause cancer, including the rare form of leukemia that you’re seeing popping up in these plants.

Well, tech companies in United States, were having these same illnesses among their own workers twenty five years ago, obviously there were complaints and lawsuits. They vowed to do away with these chemicals, but basically what they did according to a Bloomberg report from last year is outsource this work to Asian companies. And so you’re seeing it now pop up in companies like Samsung and places like South Korea where these workers are being impacted by the very same chemicals that US companies knew were dangerous. And they didn’t mind foreigners being exposed to this as long as they weren’t the ones having to foot the bill.

Farron Cousins: You know it seems to me, you’ve got corporations all over the world from the United States, some from Europe, they all tend to go to Asia, not just to for their electronics or their cheap labor. But we’ve seen it with Nestle going down into Southeast Asia using virtual slave labor. So they look at this whole, you know, Asian subcontinent here as this massive pool of we can poison you, we can put you into slavery, we can do whatever we want. And then when you finally get mad enough and when a couple of lawsuits, okay, here’s some pennies, you know, based on the profit we made off your back.

Mollye Barrows: You nailed it. That’s exactly what I thought when I was reading this. I thought, well, they go to the poorest countries or who have are countries that have workforces that are in dire need of work because this one taxi cab driver, there are a lot of documentaries I guess, and stories about this particular man because he has been so vocal and it was his efforts back in 2007, 2008 that really galvanized organizations to come behind him and hold Samsung accountable.

Because what’s so interesting is that a lot of these people who are also claiming, hey, I want compensation, they can’t fully make their claim of compensation because they don’t have all the information about the chemicals that they’re even exposed to. Samsung has been reluctant to provide that to them. Hiding behind this thing of, oh, it’s a trade secret. We don’t want to let it out. Somebody might undermine our business and cause, cost us money.

And so the government has been behind them, so this particular father as well as these other groups, they want to see changes within the government as well to allow better working conditions for workers to find out what exactly they are being exposed to, so they can do something about it. Obviously the government’s not too keen on that when you have such an enormous company like Samsung doing, making so much money in their country for them.

Farron Cousins: Right, and then see that’s the problem and we see it in the United States all the time.

Farron Cousins: We see it in other countries. As long as those companies have such a good stranglehold on the government of that country, it’s very unlikely that change ever really takes place. Mollye, thank you for telling us this story. This is really grotesque behavior on behalf of Samsung. So thank you again for telling it.