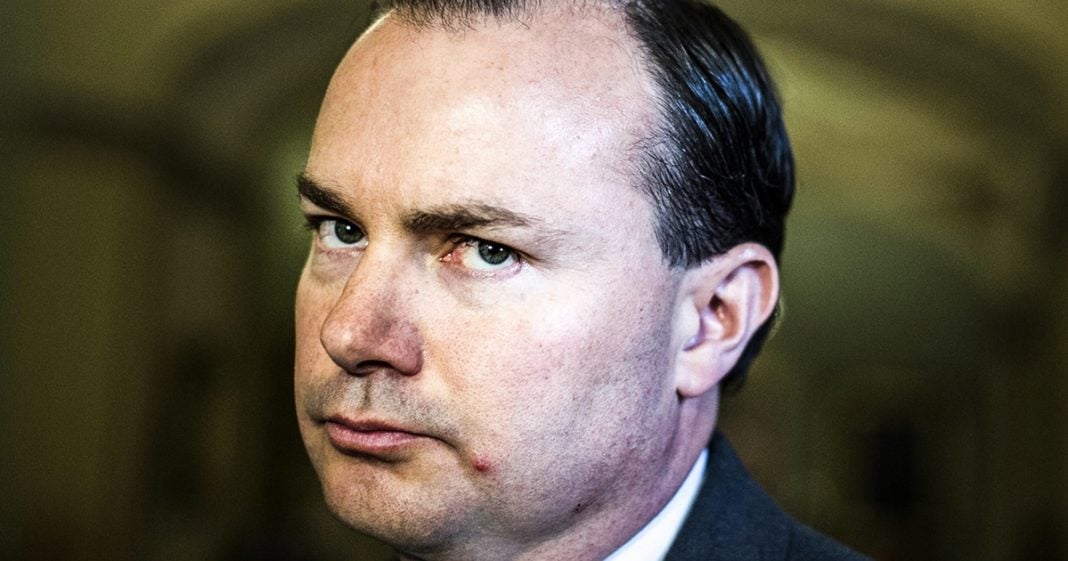 During an interview this past weekend on NBC’s Meet The Press, Republican Congressman Mike Lee said that fossil fuel emissions are probably not that great, but regulations on businesses to protect the environment are way worse. This has become the standard Republican talking point – taking action on climate change is just too darn expensive. Ring of Fire’s Farron Cousins points out all of the holes in these Republican talking points.

After the trump administration released their climate assessment report last Friday, the media, as I mentioned earlier in the week, spinel actually a lot of time talking about climate change, which is something we’ve never seen before. On NBC meet the press. They decided to go a little bit different route and, uh, Chuck Todd brought on Republican Representative Mike Lee. Now they did talk about climate change, but instead of bringing on, you know, a scientist or somebody with a plan to address the issue, Chuck Todd brought on Representative Mike Lee from Utah who told us that, yeah, fossil fuel emissions probably aren’t the healthiest things, but you know, what’s worse regulations. That is what Mike Lee said. He said, yeah, we understand emissions are bad, but we can’t destroy the economy to fix the planet God know which shows two things. First and foremost, Mike Lee doesn’t think that there is actually a problem with climate change and to. He’s not smart enough to understand how regulations actually helped the economy. And before I explained the very simple math behind that, let me read you what Mike Lee said here. There’s no question that for a variety of reasons and regardless of where one stands on the issue of climate change, that the burning of fossil fuels does admit into the environment a number of things that aren’t the healthiest.

All the proposals I’ve seen so far that would address any of these issues would devastate the u s economy and have little or no benefit that is demonstrable from our standpoint. Well, from your standpoint, Mike Lee, you’re an absolute idiot. Studies from the EPA itself have proven that for every dollar spent on compliance, it generates an additional $14 in economic activity. So we spend $1 on regulations to protect the environment and that $1 then generates $14 throughout the economy. So suppose we’re spending $1,000,000,000 to mitigate climate change on regulations and whatever. That 1 billion generates $14 billion in economic activity. So there’s your very simple math as to why regulations actually helped the economy. You idiot. But here’s another. I don’t think Mike Lee is read the report. I don’t think he understands the big words in it or the science or the charts and graphs and numbers.

That’s the one industry in the United States that’s been taking it seriously because they understand the risks. That’s literally their job to understand risk. Everybody else just been whistling past the graveyard, including Mike Lee, but I can promise you, Mike, no matter what you say about regulations, it’s going to do a lot more damage to our economy to just let the entire country burned to the ground. If we enforce the regulations that are on the books, if we create new ones to help protect the environment so we have a livable a country, we’re going to generate billions upon billions of dollars in new economic activity. It’s a win. When we get to save the planet and boost our economy, only a true idiot would think that those things are not worth it.