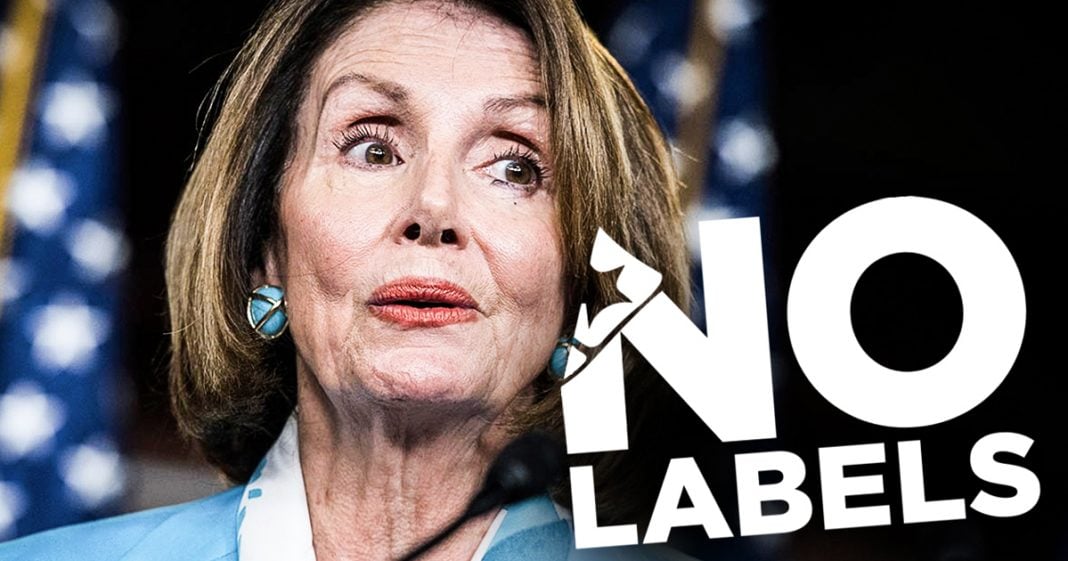 The group “No Labels” has been sued by former contractors who allege that the group refused to pay them for consulting work during the 2018 election cycle. No Labels has been a driving force in the efforts to oust Nancy Pelosi, and they’re one of the least effective, yet quite destructive, political groups out there. They would love everyone to move to the center, which isn’t what most Americans would like to see happen. Ring of Fire’s Farron Cousins discusses this.

You know, I usually don’t like to take joy in other people’s misery, but I gotta say this story right here does put a smile on my face, and this story is that the centrist group, no labels is being sued by contractors for work performed during this 2018 election cycle that they allege they were never paid for millions upon millions of dollars in consulting work, preferred performed by outside groups, hired by no labels and they never got paid according to the lawsuit. Now, if you’re not familiar with no labels, let me explain it and hopefully that will help explain why I’m a little bit happy that they’re getting popped for stiffing their contractors. First and foremost, they’re the group that is currently behind the push to oust Nancy Pelosi as speaker of the house. They don’t want her in there unless she’s willing to bend to their rules. Now, I don’t care what your take is on Nancy Pelosi.

If you love or hate or thinks she’s too moderate or or too extreme, whatever, it’s crazy, but here’s the thing. They want her to be more centrist. They want her to move more towards the middle and if she doesn’t do that well, they’re gonna team up with Republicans and try to defeat her that I have a problem with and I’m not a member of the Nancy Pelosi a fan club at all, but I do think that she would do a good job there. And with the new progressives that we have in Congress, I believe they will continue to pull her to the left, but not if this group, no labels has their way and they’ve been doing this for years. They’ve been running centrist candidates in primaries all over the country for the last few years. They do not want Democrats who are to the left on the issues to win office.

So they’re running more moderate Republicans who always somehow turned out to not be moderates after all. No labels is not a nonpartisan group as they labeled themselves, even though it says no labels. Uh, they are a right wing group and ironically being run by Mark Penn from the former bill and Hillary Clinton campaigns. And his big grand strategy in this country is just pull every one of that mythological center. It’s exactly what Bill Clinton did, didn’t work out very well for him, and that’s what Mark Penn is trying to do with his group. But I can promise you mark, it’s going to become a lot harder to do that if you continue to not pay the people who work for you. I am hoping that this lawsuit succeeds and that these contractors get the millions from no labels that they are entitled to. I would love nothing more than to see these groups like no labels and all these other centrist super packs out there to see them defeated and disappear for good.

This country needs to move further to the on policy issues. The majority of people in this country, Republicans and Democrats alike, are to the left. It’s time the Democratic Party. Realize that if you want a court Republican voters, you don’t move to the center. You go further to the left. Look at public polling on issues like Medicare for all or action on climate change or debt free college. Everybody is to the far left on that issue, at least a majority of people in this country, including Republicans, so if Democrats want to win, they need to get rid of the no labels nonsense that they’ve been sold for years now and move further to the left and show everyone left right center and everything in between that they don’t care about corporate money, they don’t care about political parties. What they care about are the issues that affect every single American citizens. That is the only way that that party is ever going to see major success again and in the process. They’re going to bring a lot of Republican voters over to their side. You don’t need no labels for that. You don’t need centrism for that. You need to move as far left as possible because the American public has already moved over there.